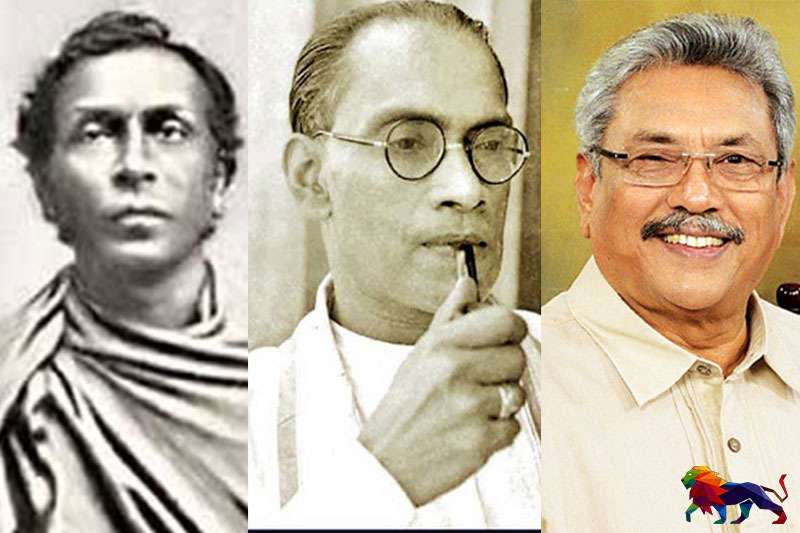 Professor Sirima Kiribamuna, making a lengthy review of the Mahavamsa, the great chronicle of Sri Lanka has extolled it as “the culmination of the historical thinking of the ancient Sinhalese".
Contrary to what professor Kiribamuna has said, the Mahavamsa cannot be considered as a book of history written for the purpose of recording the history of the Sinhalese race. It is more an account of the history of the Theravada Buddhism of Sri Lanka. However, the author of the Mahavamsa has recorded the history of Theravada Buddhism as something in which the Sinhala race and Buddhism have been inextricably linked.
On the other hand, Amaradasa Liyanagamage, who can be considered a better and more courageous historian, has pointed out that according to the Mahavamsa, the Lord Buddha by his clairvoyance, had foreseen that, after his Parinirvana, the passing away, the Buddhism (the doctrine) will finally be established and preserved in Sri Lanka.
On the same day, Prince Vijaya, a member of the Sakya clan, the clan to which the Buddha also belonged to, with the blessings of the Buddha set out from Sinhapura of Lata Rata accompanied by seven hundred followers lands on the shores of Thambapanni, a location in the island of Lanka; the Buddha spoke to the God Sakka, the Lord of gods, and entrusted him with the task of carefully protecting prince Vijaya with his followers, the new settlers arriving in Sri Lanka.
The link the author of the Mahavamsa has made between the origin of the Sinhala race and Buddhism with this narrative is not only unauthentic but also will not augur well for the Sinhala race or Buddhism.

In the pre-modern era, the Mahavamsa remained in the form of an Ola script written in the Pali language. So, it can not be considered to have made a great impact on the people of that era.

The Mahavamsa became a book that affected the psychology of Sinhala Buddhists in Ceylon only after it was translated into Sinhala and published as a book during the British rule as a part of their project on the history of the country.

In the pre-modern era, race and religion except caste did not constitute a dividing line. It was only during the modern era that ethnicity and religion became a dividing line between the peoples of Sri Lanka. According to Bryce Ryan, the bitterest conflicts in Sri Lanka which erupted from the end of the nineteenth century until about 1925 had been among different castes and not among ethnic groups.
Anagarika Dharamapala was the theorist who had made use of the alleged connection between the Sinhala race and Buddhism as illustrated in the Mahavamsa, and developed a simple theory of militant racism for Sinhala Buddhists at the beginning of the modern era.

Anagarika Dharmapala was the most recognized figure by the Sinhala Buddhists among the leaders who emerged in the aftermath of Sri Lanka moving into a modern era.  As Kumari Jayewardene has rightly put it, he was “the only aristocrat who walked with his head held high in the midst of a crowd of humble Sri Lankans who were cowardly shrinking and crawling on their bellies.”

Dharmapala was the staunch proponent of a policy that treated all non-Sinhala Buddhists living in Sri Lanka as Pariahs or outcasts and maintained that only the Sinhala Buddhists have the right to claim for Sri Lanka.

He blamed not only the Europeans who conquered Sri Lanka but also the minorities living in the country for the decadence of the Sihala nation and Buddhism. He referred to all those who consumed beef (he called beef Gerimas) as Vasalayas or social outcasts. The militant and   racist ideas spread by Dharmapala among Sinhala Buddhist people affected the Muslims and Burghers devastatingly while he was alive.

The Sinhala-Buddhist militant racism introduced by Anagarika Dharmapala continued to act as a cancer pervading the post-independence Sinhala Buddhist community. There was a growing discontent and unrest among the community of the Buddhist Sangha over not restoring Buddhism, to the level it enjoyed during the reign of ancient Sinhala kings despite a considerable time having lapsed after independence.

In view of the prevailing unrest among the Buddhist priests, Venerable Henpitagedara Gnanaseeha Thero, Gunapala Malalasekera and NQ Dias launched a strategic program to enlighten the Buddhist priests and the Buddhist people of the circumstances and win a Sinhala Buddhist government. The movement of the Buddhist Commission constituted the strongest component of this program.

The change of government in 1956 was arguably the greatest revolution that took place in the sphere of Buddhism since the Buddhist revival movement that emerged during the colonial period. The Buddhist monks acting as the driving force has been the most important feature of the ’56 revolution.

Prime Minister Bandaranaike abolished the prominence accorded to English and made Sinhala the only official language, contrary to the agreement reached between the political parties to grant the status of an official language for both Sinhala and Tamil languages.

At the same time, the UNP too appeared for a Sinhala-only policy discarding its old language policy. Only the two leftist parties (the LSSP and CP ) appeared for the language rights of both Sinhala and Tamil communities.

The Sinhala-only policy of Bandaranaike did not stop at pushing the Tamil people of Sri Lanka into a fierce struggle for their language rights, it also led to removing the Sinhala youth from bilingual education and restricting their medium of instruction only to the Sinhala language. Prime Minister Bandaranaike was eventually assassinated as a result of a conspiracy of Buddhist monks.

But none of these developments led to weaken the Sinhala-Buddhist supremacy but to strengthen it.

The only capacity it possessed was to bulldoze the rights of minority ethnic groups by employing the majority power it had; so it played a destructive role rather than serving as a progressive force.

Before long, the LSSP and the Communist Party, the only leftist political parties that worked among the Sinhalese people that did not endorse or recognize the domination of this movement, formed a coalition with the SLFP and pushed themselves also into a point of repulsive politics in which they opted to hold political protest rallies shouting slogans tinged with communal flavor like “dudlige baday masalawade “(Dudley’s belly is full of masalawade).

Thereafter, the new left that emerged in the form of the JVP also proved to be a political party that worked accepting the Sinhala-Buddhist supremacy, since its inception. Although the UNP formed a coalition government with the Federal Party in 1965, it also collapsed during the latter part of its term as it feared to transcend the boundaries set by the Sinhala Buddhist supremacy.

The next coalition government formed by the SLFP, LSSP and the Communist Party adopted laws that led to oppress the Tamil people while maximizing the supremacy of the Sinhala Buddhist chauvinism. These ruthless laws eventually pushed the Tamil people to launch a fight for a separate state.

As the ideology of Anagarika Dharmapala was no longer adequate to overcome the new challenges, there emerged new ideologies such as those promulgated by Gunadasa Amarasekara, Nalin de Silva and Champika Ranawaka. All of them added to intensify the stupidity of the followers of their philosophy rather than improving their intellect.

The Sinhala-Buddhist supremacy was raised to its maximum carrying it to a greater height by the successful program of anti-Eelam war launched by President Mahinda Rajapaksa to defeat Prabhakaran and his persistent Eelam war. The victory of the internal war had led to conceal the decline and decay of the State. The victory of the war resulted in President Mahinda Rajapaksa being acknowledged as the crown prince of the Sinhala Buddhist people.

Another change that took place in the face of the complete defeat of the Tamil enemy was that the fight against the Muslims became the next major war of the Sinhala Buddhist nation.

The defeat of Mahinda Rajapaksa at the presidential election 2015 was a source of anger and surprise for the Sinhala Buddhist forces which they perceived as an outcome of a conspiracy hatched by the minorities against the majority of the country; as usurpation of the political power which they possessed and was entitled to.

The best way they saw to overcome this situation has been to win the next presidential election only with the support of the Sinhala Buddhist votes. As in 1956, the Buddhist monks undertook the responsibility of organizing the people for that purpose.Gotabhaya Rajapaksa was assigned the onerous task of rescuing the Sinhala Buddhist people.

The Passage to Hell, instead of Heaven

As expected, this force was able to win both the Presidential and Parliamentary elections solely on the strength of Sinhala Buddhist votes. But the victory they have achieved has brought them to the abyss of hell rather than the kingdom of heaven which they hoped for. In any case, it would have been the ultimate logical outcome of this journey.

Every leader commencing from Anagarika Dharmapala up to Gotabaya who had led the country along this path have disrupted the country and carried not only the minorities but also the majority of the Sinhala Buddhists to destruction rather than leading them to liberation.

In the context of this end result, the political movement dominated by extremist Sinhala-Buddhists is now destined to come to a historic end.

The leaders, as well as the actors of this political movement, will lose their recognition soon. Inevitably, all of them will end up in being a source of anger and contempt of the majority Sinhala Buddhists. It is important that we understand that one ugly and gloomy era is coming to an end and it is time to herald a new era that is beautiful and fair.