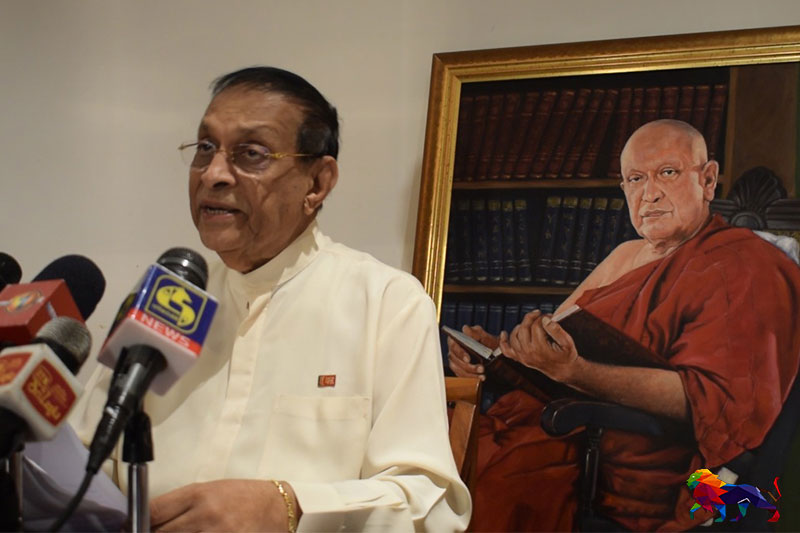 On the occasion to mark the fifth-year commemoration of the late Venerable Maduluwawe Sobitha Thero,
the former Speaker and Chairman of the National Movement for a Just Society Karu Jayasuriya, called for a just society where justice and fairness reigned.

Jayasuirya noted that it was the venerable thero's efforts that helped to create a regime change in 2015.

"The people of Sri Lanka managed to change a powerful regime that had then gained a two-thirds majority. This was a result of him placing the country at the forefront irrespective of race, religion or party affiliation and leading the people towards that change.  His voice was instrumental in awakening the minds of the people. It was also because the people of this country had immense respect and trust in him," Jayasuriya said in a statement.

"The Venerable Thero never pursued wealth, power or fame. At the very least, he was even unwilling to accept any of the religious titles bestowed upon him. He lived an exemplary and humble life. We revered, respected, and followed him because we valued those noble qualities," he added.

Full text of the statement by the Chairman of the National Movement for a Just Society is as follows:
"The former Speaker observed that the venerable thero's "philosophy is very much required to restore a society that has been hoodwinked by lies, injustice and deceit."
Today is an opportunity to commemorate a Most Venerable Thero, who has worked tirelessly with sheer determination in recent times to protect the democratic rights of the people of this country and to create a society where justice and fairness reigned.

It has been five years since the death of the Most Venerable Maduluwawe Sobitha Thero. His honorouble character was full of sublime qualities that demonstrated his infallible rectitude.

We can identify him as a great follower of the Buddhist philosophy who had a colossal impact on our motherland in recent times, espousing the many qualities displayed by revered theros of the bygone era such as Wariyapola Sri Sumangala, Migettuwatte Sri Gunananda and Walpola Sri Rahula.

Throughout his lifetime, he has acted with a sincere sense of nationalism, and whenever he was faced with challenges, be it national, religious or cultural, he always stepped up and represented the national aspirations of the country without any hesitation.

One such instance was the political transformation that took place in this country in 2015. The people of Sri Lanka managed to change a powerful regime that had then gained a two-thirds majority. This was a result of him placing the country at the forefront irrespective of race, religion or party affiliation and leading the people towards that change. His voice was instrumental in awakening the minds of the people. It was due to the resounding admiration and appreciation he received from the people in this country.

The Venerable Thero never pursued wealth, power or fame. At the very least, he was even unwilling to accept any of the religious titles bestowed upon him. He lived an exemplary and humble life. We revered, respected, and followed him because we valued those noble qualities.

We also participated in the 70th birth anniversary celebrations of the Most Venerable Sobitha Thero that was held on 29 May 2012 at the BMICH. At that time, the very fabric of our democratic heritage was under threat and personal freedoms were in complete disarray. Justice was undermined and injustice prevailed. Disappointed at these developments, the Most Venerable Thero, at that moment, pledged to raise his voice against these injustices.

On that day, the main theme of his lecture was on how the executive presidency, a political system that was unique to Sri Lanka which possessed unlimited power, had turned into a parasite.

As such, we recall how he made an emotional appeal to all segments of the clergy, other religious leaders as well as all patriotic communities in the country to support him in his endeavor to abolish the executive presidency and to safeguard democracy.

On the same night, the Venerable Thero was visited by his followers. The fact that he was assured of their unwavering support and commitment to make the movement a success while submitting various proposals was a testament to the trust they had placed in him. It was also the country’s good fortune that a large number of people had come forward to support him.

A few days later, about 60 Buddhist monks representing the Maha Sangha arrived in Colombo and with their blessings, the ‘National Movement for a Just Society’ was born. This is how a national movement that was able to create a regime change was formed.

From that time until the 2015 Presidential Election, we respectfully and devoutly remember his great commitment, visiting all corners of the island, with the full support of the Maha Sangha, uniting various ideological and political movements in this country and amalgamating the patriotic people under one banner.

Furthermore, we should also mention the myriad of occasions when his life was under threat. We cannot forget how his life was placed in danger once as the vehicle in which he was travelling was subject to a hit and run. We can’t forget the failed attempt to poison him.

With today’s press briefing, while commemorating the Most Venerable Thero, we hope to apologise to him for the many insults and injustices he had endured.

The Most Venerable Thero,
Due to your advice, guidance and leadership, there was a regime change. Many people secured various positions because of you. It is a known fact that after your death, pledges were made to fulfill the promises that were yet to be realised. Talking about it hurts us too. Some have completely forgotten you. As there were prior instances of people who had ruined the political lives of Anagarika Dharmapala, one of the most revered figures in our country and Sir CWW Kannangara, the father of free education, it was not a surprise. But such things can no longer be tolerated.

However, it was due to your philosophy that Sri Lanka was lauded by the international community, including the United Nations and world leaders, for having one of the most exemplary democracies in the world during the first two years of that administration from 2015-2016. But you were not able to see that.

Thereafter, we were saddened by the unfortunate situation that arose in the country due to the disagreements within the government. We were shocked. We apologize to you for that.

After your demise, it has been clear to all how politics has degraded the values of our country, how some misled the masses by exploiting race and religion, how religious centers were used to propagate petty political agendas by spreading various misinformation, and how people were deceived by the snake king that manifested inside a bottle. Today, it is the Maha Sangha that exposes such incidents.

We know that the truth can never be suppressed and will come out one day. It is with great humility that I inform you that the aforementioned facts are being brought to light by the thousands of members of the Maha Sangha and the general public in remembrance of your great name.

The Most Venerable Thero, although we wish that you attain nirvana, your philosophy is very much required to restore a society that has been hoodwinked by lies, injustice and deceit.

Therefore, we are hopeful that the people who are aware of these developments and value a just society will soon accord him the respect that he deserves.

Venerable Thero, may you help us to fulfil that noble aspiration. It is for the generation that is yet to be born. May this endeavor of ours be a tribute to his name!"