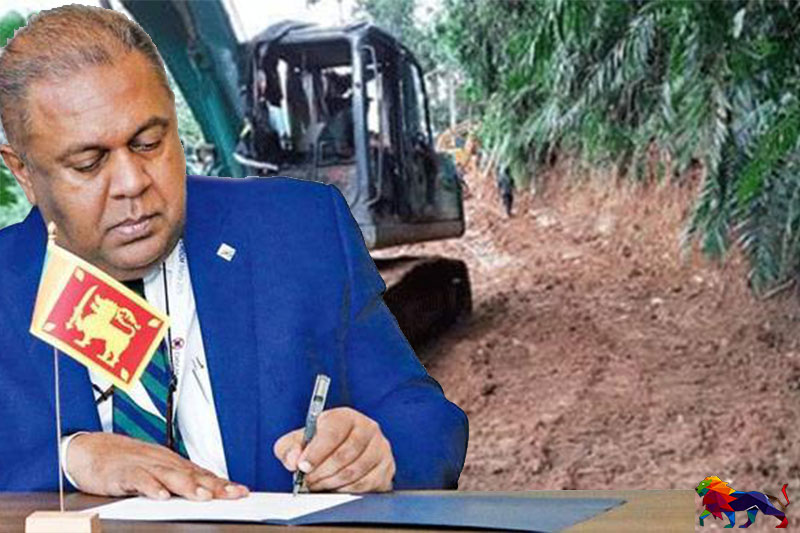 Former Finance Minister Mangala Samaraweera has written to the United Nations Educational, Scientific and Cultural Organization (UNESCO) on the danger faced by the
Sinharaja Forest Reserve due to the construction of a road from Lankagama to Neluwa through the Sinharaja forest reserve.

In his letter to the Director General of UNESCO, Samaraweera noted that there were several attempts to construct roads bordering the forest reserve on previous occasions too, which were halted by Gazette Extraordinary 2150/31 dated 20 November 2019 through which former president Maithripala Sirisena authorised the expansion of the forest reserve to quadruple the protected area to counter the fragmentation of the forest.

He further said that environmentalists had pointed out that building the road would lead to hotels and shops being constructed along the way, and the forest reserve being encroached upon further including for cultivation purposes, and result in increase of vehicular traffic including at night time, increase in illegal activities including bio-piracy, and pollution of the river (Ginganga).

However, the former Minister said that environmentalists had suggested that the government have discussions with the approximately 300 families and allow the villagers to continue living in Lankagama and leave the road as it is or accept that the villagers and their children have a right to development and a knowledge-based education and provide them land and necessary facilities elsewhere. If any of the villagers choose to remain in Lankagama as opposed to accepting land elsewhere, then that should be allowed only on the understanding that they should not expect any development within the village, he said.

"Sri Lanka’s forest cover is just under 30% and that too is rapidly shrinking. While it is a fact that all Sri Lankans have a right to equal access to all facilities, it is also equally important for their survival that development is sustainable in keeping with the Sustainable Development Goals (SDGs). The interconnected nature of life, the absolute necessity of maintaining and preserving bio-diversity and forest cover for sustainable development and for dealing with climate change have now been scientifically proven. It is recognized that protection of natural resources and forest cover are essential to life and for maintaining a higher standard of life for all, not only in Sri Lanka but the Planet as a whole. The value of Sinharaja which is a World Heritage property, in this context, is not only for Sri Lanka but for the entire world at large. It is one of the region’s last remaining bastions of ecological importance," he added.