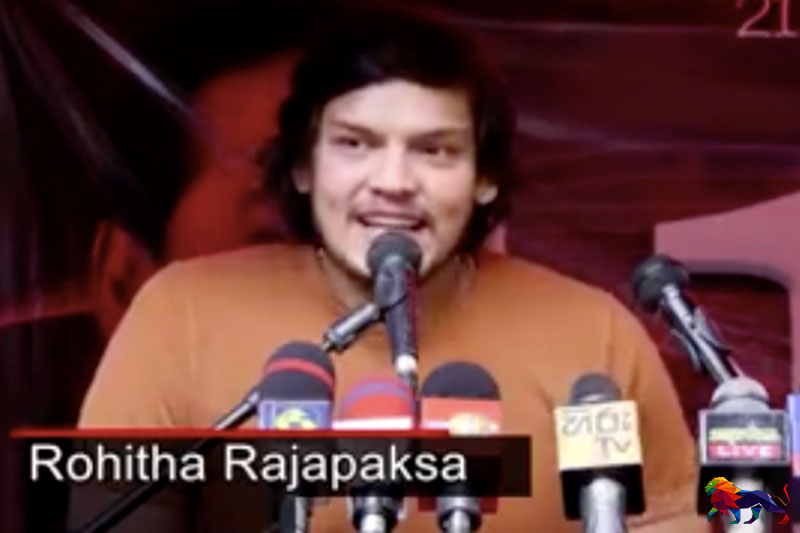 Rohitha Rajapaksa, the youngest son of Prime Minister Mahinda Rajapaksa who is contesting the upcoming general election from the Kurunegala district, attended several
meetings on behalf of his father yesterday (06).
Rohitha Rajapaksa attended a meeting in Mahi Ella, Mawathagama together with Sri Lanka's former ambassador to Russia and Ukraine, Udayanga Weeratunga, who was accused of money laundering as well as misappropriating close to US $ 7.8 million in connection with the purchase of MIG aircrafts.
Speaking further, Rohitha Rajapaksa said:
"My father said that as he is finding it difficult to walk, for me to come and speak to you. He asked me not to speak politics but find out instead what their problems are.
I said ok, then I will go but don't ask me to contest an election later on. However, I told him that if I were to inquire about their problems and they aren't solved later, then I will also face issues.
But my father listens to me. I am the one who is with him at the house the most because my elder brothers are quite busy. I believe if I go and tell him about these problems, he will speak to the relevant officials and ensure some justice is done.
I think for the first time in the country's history, an office of the Prime Minister will be in Kurunegala. Any issue, be it personal or public, will be addressed by the officials there.
I think the main issue here is with regard to water. Also the human-elephant conflict but not anymore in this area is it? Even the elephants that remained here have run away now as they have broken into two.
The Prime Minister developed the Hambantota district immensely. I think he understood that he must go to a different part of the country and contribute to its development. I think that is why Mahinda Rajapaksa came to contest from the Kurunegala district after his defeat.
On that occasion, you cast your vote for him without considering his hometown or district and for that, I am truly thankful for the people of Kurunegala.
Rohitha Rajapaksa also inquired into certain problems of party supporters and one of the main concerns was the decision taken by the SLPP not to nominate former North Western Provincial Councillor Ashoka Premadasa to contest the general elections."