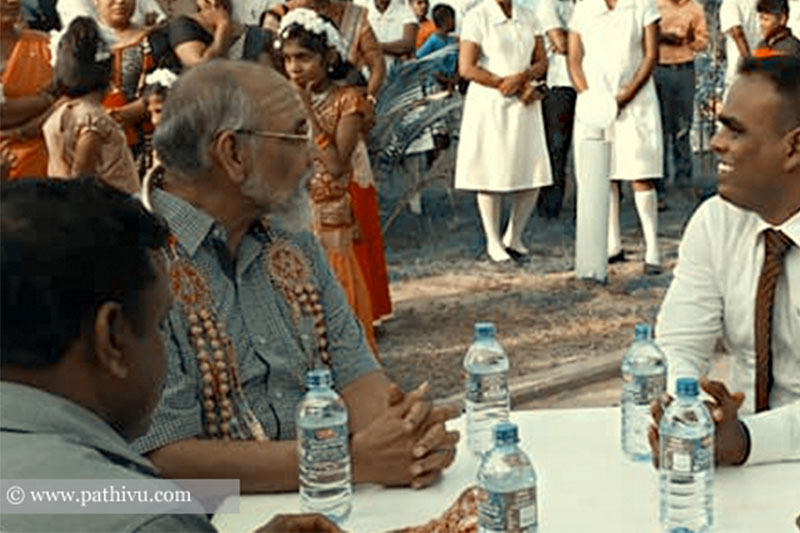 Tamils in northern Sri Lanka have been protesting the detention of a forensic expert who had provided crucial forensic evidence on several human rights abuse cases exposing the involvement of security forces.

Director of the Palai hospital in the Kilinochchi district, Dr Sinnaiah Sivaruban, who is a Judicial Medical Officer (JMO), arrested by the military is been held in Terrorist Information Department (TID) custody since 18 August.

Police say that the doctor who is held at the Jaffna police station is to be transferred to Colombo for further investigations.

Dr Sivarubn’s family will be forced to travel nearly 400 kilometers if he is moved to the capital.

“He was arrested by the military on information about is having links with terrorists,” said Police Spokesperson Ruwan Gunasekara.

Hospital workers and residents protested the security forces’ action as a move to dodge accountability for atrocities committed during the war and its aftermath.

Protesting Tamils who are strongly convinced that Dr Sivaruban was arrested due to his career as a Judicial Medical Officer (JMO) urged authorities to produce him in court.

“Being a JMO, he has the expertise to expose death and torture during and after the war,” said chairman of the local government body of Karachchi, Arunachalam Velamalikithan.

“He has the bravery and intelligence. Whatever claims the authorities make, this is an effort to evade war crime allegations. In order to stop him from taking the information to an international level, they are intimidating him.”

However, the Sinhala press was quick to go to town with claims of a plot to assassinate VIPs including the president, army commander and presidential hopeful Gotabaya Rajapaksa, with assistance from the now defunct Tamil Tigers.

It claimed that the TID found a cache of explosives meant to be used in the “assassination”.

Few months ago, the same newspaper published unfounded allegations against a Muslim doctor accusing him of forcibly sterilizing Sinhala mothers, which was later denied by the criminal investigators.

The media increasingly promoting hateful narratives towards non-Sinhala communities, has also been noted by the UN.

“While some blamed journalistic sensationalism, others noted that the privatised and politicised electronic media play a large role in demonising individuals and groups,” UN Special Rapporteur on freedom of religion or belief Ahmed Shaheed told journalists in Colombo on Tuesday.

He was speaking after a ten-day visit to Sri Lanka where he met with political leaders and state officials as well as representatives from different religious communities, civil society organisations and research institutions.

“A recurrent complaint was the role of the media and social media in fomenting hatred and disinformation, the failure of the police to protect minority communities and the inability to hold perpetrators to account. The recurrence of such episodic violence has fostered a climate of fear amongst Muslim groups and if unaddressed, it is likely to cause an exodus of Muslims from the country.”

Tamil journalists say that Dr Sivaruban’s contribution as a JMO has contributed to exposing many crimes involving security forces, including the rape of minors allegedly by the state sponsored Tamil paramilitary, Eelam Peoples Democratic Party (EPDP).

During the war, he had strongly resisted EPDP pressure to help them in targeting suspected Tamil Tigers.

“On July 4, Dr. Sinniah Sivaruban (strictly protect) from the Jaffna Teaching Hospital told Poloff that his friend and third-year medical student, Kunaratnam Suganthapan, attempted to recruit him to work for EPDP,” Acting Deputy Chief of the US mission, Michael DeTar has said, according to a confidential cable in 2007 made public by Wikileaks.

Meanwhile in a separate incident, the office of the Jaffna based think tank, Adayaalam Centre for Policy Research, was also visited by the TID offiers on 6th August.

"Wanted to know what we do, who funds us etc. When asked whether they are investigating a complaint they said no, but that they were asked to make inquiries by their superiors in Colombo," Centre's Executive Director Kumaravadivel Guruparan tweeted.