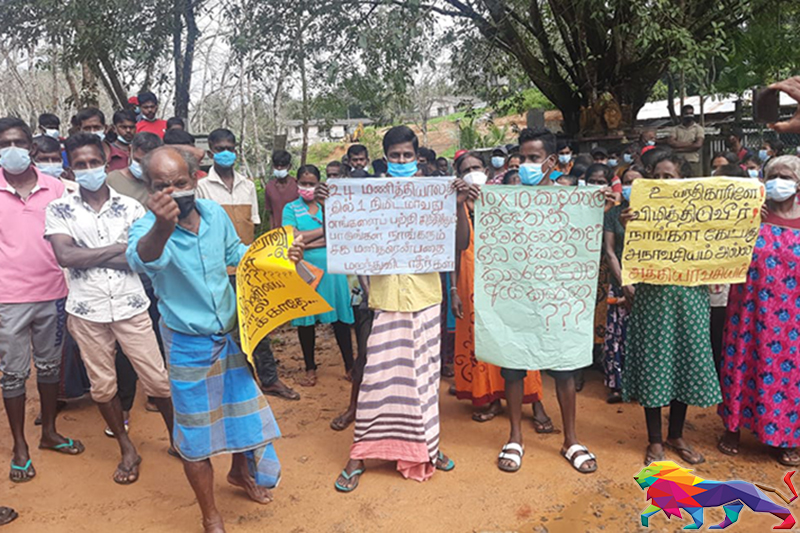 Estate workers in the Colombo district have launched a protest campaign after a female worker is said to have been physically assaulted by an estate manager.

He has also been accused of destroying the one bedroom house the woman had recently built to reside in.

In a protest held yesterday (18), estate workers demanded the authorities to take action against the offending manager. The incident had taken place at the Penrith estate in Avissawella.

According to sources, the woman had built the house with prior permission of the estate’s management. However, the estate manager had later ordered its destruction and gone on to assault the woman. She is currently receiving treatment for her injuries.

The manager has also been admitted to the hospital and is also receiving treatment after the woman’s two sons had attacked him in retaliation for the assault on their mother.

The estate workers during the protest also demanded the destroyed house be rebuilt. They are also accusing the Police of failing to take action against the manager for the assault.

He had revealed this while participating in a recent programme held to mark the World Habitat Day which falls on October 04.

Civil rights activist Subhadra Kumari noted that the housing problem has existed in Sri Lanka for 40 years since 1979.

"All of us are low-income earners. As such, we endure many economic hardships. We live with our parents and at relatives' houses as we are unable to pay rent elsewhere, often compromising each others privacy as a result. When four to five families comprising ten to fifteen people have to live in the same house, tensions are sure to rise due to the loss personal space and freedom," she said.

Homelessness continues in the North

Meanwhile, the Rural Workers' Union points out that in the post-war era, homelessness has continued in the Northern Province.

“More than 7,000 families are still living in refugee camps or in relatives' homes or in rented accommodation, hoping to be resettled. About 800 of these families are still living in refugee camps. A large number of lands belonging to Tamils have not been released and are being held by the military for the development of the Myliddy and Kankesanthurai ports and the Palaly airport,'' President of the Rural Workers' Union A. Imbanayagam pointed out.