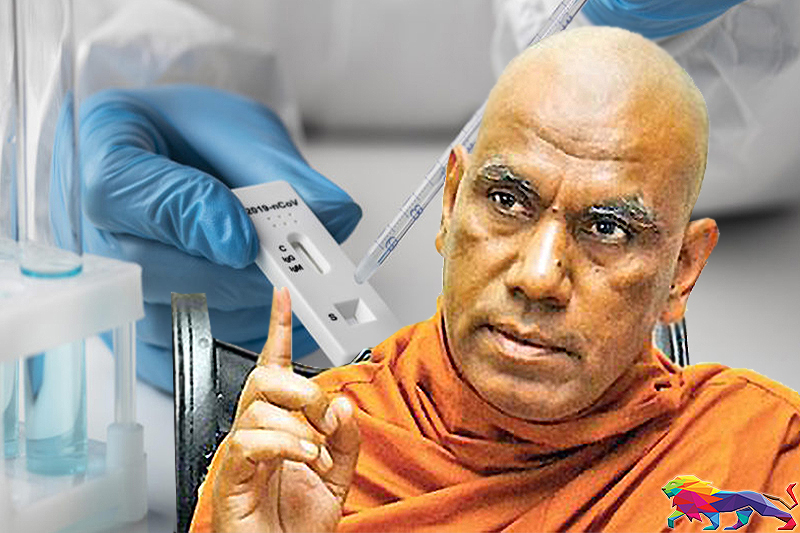 Speaking at a press briefing, Ven. Sobhitha Thera pointed out that certain businessmen have capitalised on the government's decision to stop conducting PCR tests at the Bandaranaike International Airport (BIA) in Katunayake.

On September 23, Sri Lankan authorities unveiled a PCR testing laboratory at the BIA which enabled travelers to undergo a PCR test at the airport upon arrival and have their results within three hours.

The state-of-the-art facility built at a cost of USD 5 million has the capacity to conduct 500 PCR tests per hour, with a total of 7000 tests during the course of one day. The laboratory can issue a PCR test report to tourists arriving in the country in as little as three hours.

This is not a transparent process. Some private companies have come forward to produce vaccines in Sri Lanka but the government has turned a blind eye to their requests.

There was a big public outcry over the procurement of rapid antigen tests. Allegations were levelled against the government for procuring these test kits at high prices when they could have been purchased for much less.

There is a massive fraud taking place in Katunayake with regard to PCR testing. Innocent passengers are being forced to stay at private hotels paying exorbitant prices.

When this was uncovered by the media, the government took measures to open a PCR laboratory at the BIA at a huge cost. The facility has a capacity of conducting 500 PCR tests per hour. The facility was in operation for a couple of days when they decided to cease all operations.

So what is really happening? They are just paving the way for selfish businessmen to make huge profits.

It is clear that these programmes aren't being initiated without good intentions. We may have to reconsider how the vaccination drive is being implemented. Act according to your conscience. We can only say to heed the advice of the Buddha."