A former Governor says only nine agrochemicals are seized by the Registrar of Pesticides.

He also says that the Registrar of Pesticides has ordered to seize and take legal action against the sale of only 9 of the nearly 30 pesticides being sold illegally islandwide.

Rajith Keerthi Tennakoon, the former Governor of the Southern and Central Provinces has revealed this information in a recent press release.

"The government, which has turned a blind eye to the situation for a long time, issued this order on September 24, 2021, following my revelation on September 23. It is gratifying to see the arrest and prosecution of those selling illegal agrochemicals under the Pesticides Act, but the government has created the environment for the free sale of highly toxic chemicals by seizing only nine illegal pesticides," the former Governor said in a statement.

"Even the highly toxic monocrotophos, malathion and carbofuran, which were banned in Sri Lanka some time ago, are being imported in unlimited quantities. They are packaged under various names and are currently being sold in the market. The government's plan is to portray to the country and the world that it is promoting organic farming and to cultivate in the Maha season using agro chemicals instead.”

Organic farming has now been created in name only. They are using agrochemicals smuggled into the country by boat which is then smuggled across the country and sold illegally.

"The short sighted policy of the Ministry of Agriculture has pushed Sri Lanka's agriculture to a point where it is completely dependent on the black market. Agrochemicals worth Rs. 6000 are now being sold for Rs. 12,000," he alleged.

The Registrar of Pesticides, under the Pesticides Control Act No. 33 of 1980, has directed all authorised officers, all prosecuting officers and litigation officers to search and prosecute only those selling nine types of illegal agrochemicals.

Thereby, all other illegal agrochemicals have been given an open unofficial license for sale. 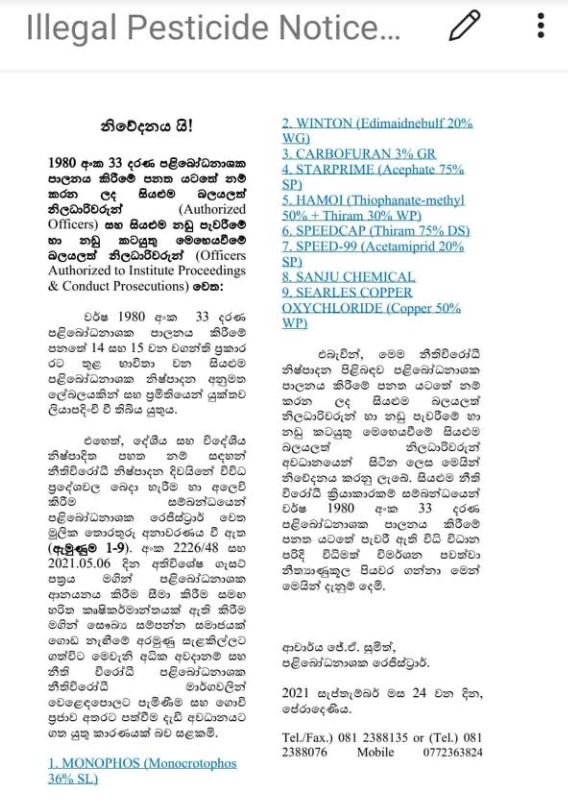 Former Governor Rajith Keerthi Tennakoon has called for the government to take immediate action to seize all illegal agrochemicals being sold in the country and to prosecute the smugglers.

The photographs show unregistered and banned agrochemicals that have been ordered to be seized.