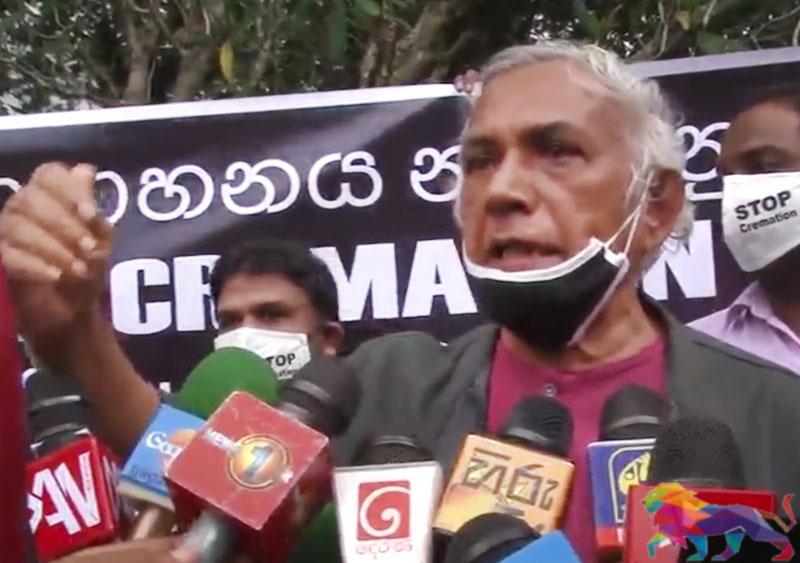 The government has been asked to stop its policy of forced cremations and to act in a manner that would bring solace to the minds of the Muslim communities at the begining of the new year.

"A new year has dawned. We hope that tomorrow will bring happiness into the hearts of our Muslim people. Otherwise, the government will have to face daily battles in the new year as the Muslim community would fight to win their freedoms and democratic rights." This was stated during a protest held opposite the Borella Cemetery on Wednesday (31), under the theme, "Stop Forced Cremations".

"We have to endure this struggle for democracy," a left-wing Muslim leader at the protest said.

He further urged the country's Muslim leadership to join the fight to stop enforced cremations of Muslims COVID-19 victims.

Prof. Wickramabahu Karunaratne, who also participated in the protest, stated that the leaders of the present government, who have said that they accept the teachings of the Buddha, are completely acting against the Buddhist philosophy.

"However, the Buddha never pressured King Kosala or King Bimbisara to impose laws to convert people from other religions to Buddhism or to stop them from following their religious rituals. The Buddha would have called it a horrendous crime," he said.

Prof. Wickramabahu Karunaratne, accused the government of trying to impose laws against the religious beliefs of the Muslim people and inquired whether the Justice Minister was unaware of the laws that govern this counrty.
One Country - Two Laws !
Pointing out that the government is continuing the policy of forced cremations simply to appease the Sinhala Buddhists, he said that government has failed to maintain a 'one country - one law' policy by not allowing the Muslim communities' request for burials of COVID victims.

Protesters held placards with slogans such as "end racism, where is the committee of experts, 20-day-old baby burned," etc.

It was reported that representatives from all communities had participated in the protest that was organised by the Muslim Left Front.