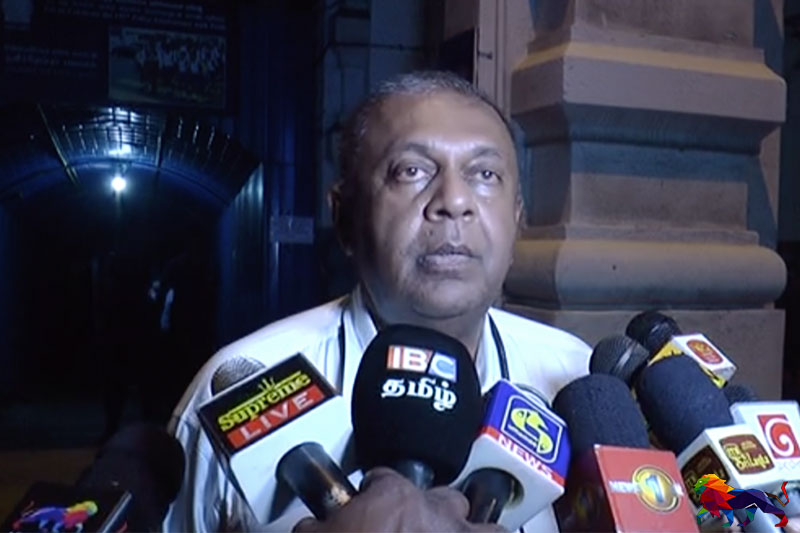 The Criminal Investigation Department (CID) recorded a five hour statement from former finance minister Mangala Samaraweera who was summoned to the CID yesterday (14) at
2.00 pm. He was requested to appear next Tuesday (19) at 9.00 am for further questioning.

The former finance minister was questioned regarding an investigation that is being carried out by the CID for providing transport facilities via the Sri Lanka Transport Board (SLTB) to 12,500 Internally Displaced Persons (IDPs) residing in the Puttalam district to travel to the Northern Province to cast their votes during the last presidential election as per a request made by the 'Project Management Unit of Resettlement of Protracted Displaced Persons.'

The CID has commenced an investigation based on a complaint lodged by a well-known 'voice cut' Thero. The Thero has filed a complaint claiming that the government had authorised a payment of LKR 9.5 million to provide 22 buses for the transportation of 12,500 IDPs from Puttalam to Mannar to vote at the presidential polls.

"I am proud as a Sri Lankan citizen"

Samaraweera, speaking to media after being grilled for over 5 hours at the CID yesterday, said that he was happy not only as the minister of finance but also as a Sri Lankan citizen to have helped citizens victimized by LTTE terrorism and to have ensured their right of franchise. “I told the CID I am proud of it,” he added.

The former minister noted that although he was interrogated for over five hours by the officers of the CID, they conducted the investigation in a professional manner.

Samaraweera pointed out that these persons have suffered for 30 years at the hands of the LTTE  and that no government was able provide anything to these people. "All of us have to take responsibility for that," he said.

He further said that he was happy to have done the responsible thing and guaranteed these Internally Displaced Persons' (IDPs) right to vote.
Samaraweera noted that even Basil Rajapaksa had done the same deed during the previous Rajapaksa regime and facilitated transport facilities to IDPs.
Related News:
Mangala Samaraweera summoned to the CID; attempt to arrest him?