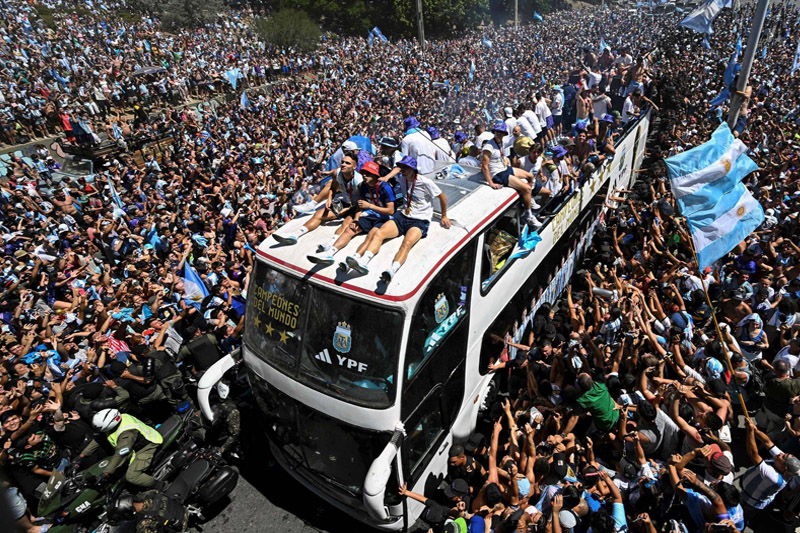 Argentina’s World Cup parade ended in chaos leaving one fan dead and a boy, 5, in a coma as fans clashed with cops and the team had to be evacuated by helicopter.

Pictures show wild scenes of the team bus flanked by riot police as some four million people flooded the streets of Buenos Aires.

But the scenes became increasingly chaotic as fans started to mob the team bus - including trying to climb aboard by jumping off bridges, The Sun reports.

Footage showed one fan falling around 20 feet as he plunged from a bridge and just missed the double decker carrying the players.

Lionel Messi and his teammates were celebrating as they delivered the nation’s first World Cup victory since Diego Maradona led the side to victory in 1986.

The incredible 3-3 final against France, which ended up being decided on penalties, has sparked a week of celebrations across Argentina.

But the scenes were marred as the bus parade was cut short due to safety concerns - and the players were helicoptered to safety.

Health officials confirmed how one fan in his 20s died after he fell through a roof after “jumping up and down” while celebrating the parade.

And the young boy is in a coma after sustaining a serious head injury following an incident in Plaza San Martin.

It was reported a piece of marble fell from a monument during the celebrations - striking the child.

Other footage showed police having to take cover from missiles being thrown at them by hooligans.

Shameful scenes showed a small group of officers cowering behind their shields.

Meanwhile, firefighters tried to reach fans who had forced the doors of the 235ft-high Obelisk in Buenos Aires.

The fans risked their lives by climbing up the inside of the iconic monument to open windows at the top.

TV images of angry young men pelting the police with bottles and stones also showed the base of the famous monument.

Initial reports put the number of arrests following the incidents at 13.

Eight police officers were injured - although the number is expected to rise.

The ugly episode marked the end of an extraordinary day in Buenos Aires.

Overnight footage emerged of the problems foreign reporters covering the street celebrations had to endure while they broadcast live to their studios.

Matthias Ebert, South American correspondent for German public broadcaster ARD, had a replica World Cup placed on his head before being lifted in the air and bumped up and down by noisy fans surrounding him.

In another live broadcast he was left looking like a snowman after being covered by foam - although he won an army of his own fans by continuing to shout into the microphone and make himself heard back in the studio above the din the rowdy supporters were making.

He yelled as he was transformed from the smartly-dressed TV reporter he started out his broadcast from the Obelisk as before last night’s/Tuesday night’s violence: “Here hell is being unleashed. Everyone has been waiting for the team from the early hours of the morning.

“There’s a lot of euphoria and enormous pride. They clearly want to show Germany they’re the ones who won.”

CNN correspondent Stefano Pozzebon also ended up covered in foam, although some of the fans around him got aggressive at times and he had to push one man away who tried to grab his microphone as his face and hair disappeared under the mess of what was being thrown at him.

The Argentinian press admitted the World Cup celebrations had ended up complicating some foreign correspondents’ jobs to “extremes.”

And Argentine football chiefs admitted their disappointment at ending the tour early - with the players instead completing their journey by helicopter.

A spokesman for the Argentina FA said: “The players of the Argentine soccer team ended the festivities by flying over in a helicopter over the crowd of fans who gathered in the city.

“They made that decision after verifying that they could not continue advancing by bus in the middle of the crowd.”

And AFA president Claudio Tapia said: “They don’t let us get to greet all the people who were at the Obelisk.

“The same security agencies that escorted us don’t allow us to move forward.” 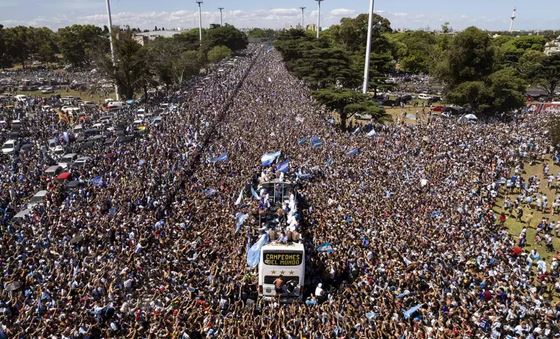 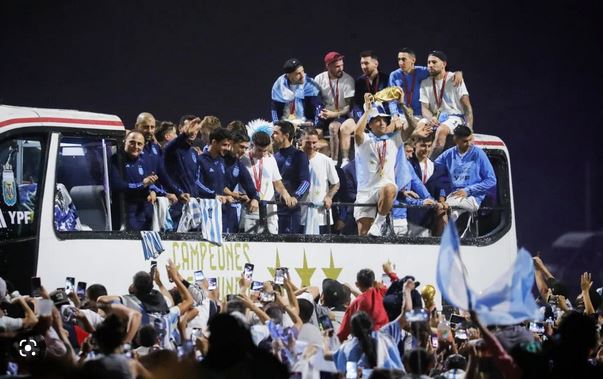