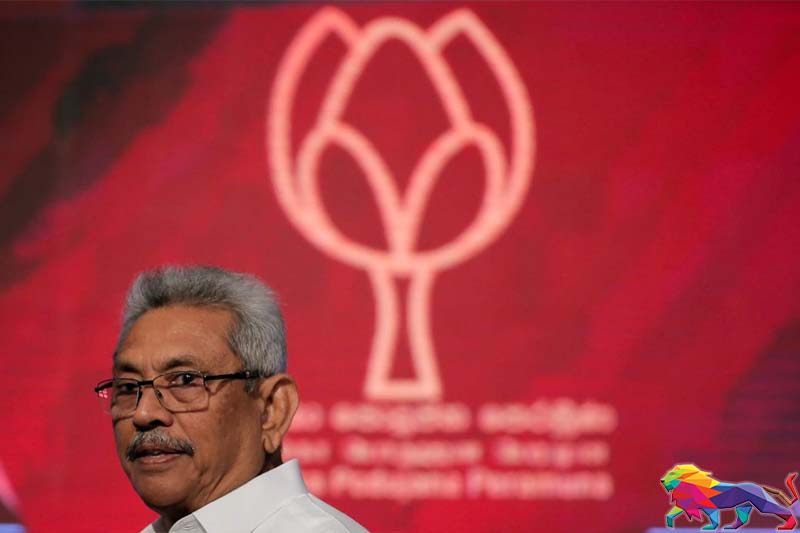 The Sri Lanka Podujana Peramuna (SLPP) hierarchy has decided not to use either the name or the picture of former president Gotabaya Rajapaksa in the party’s propaganda activities any longer, according to the Nelum Mawatha office sources.

In the meantime, SJB MP Mujibur Rahman told the media yesterday (16) that Rajapaksa’s picture has disappeared from the digital screen that appears behind speakers at press conferences at the SLPP headquarters.

During the Galle Face protests, pictures of both Mahinda and Basil were missing during SLPP events but they have now resurfaced, said Rahman.

The former president did not hold any office in the SLPP although he successfully contested the presidential polls from the party.

Basil had vehemently rejected pressure from government quarters to appoint Gotabaya as the party leader.

Gotabaya had continued to earn the wrath of the party strongmen for having ignored them and opposition to him intensified after all Rajapaksa family members, with the exception of Mahinda, as well as Johnston Fernando and Rohitha Abeygunawardena, were stripped of cabinet positions.

It climaxed on May 09, when thousands of party activists summoned to Temple Trees were told openly by its leaders that Gotabaya should be expelled.

The party supporters stormed the protest site and had even planned to surround the President’s Office.

However, those plans backfired and SLPP strongmen’s properties were set on fire that same night, while Mahinda lost the premiership.

Although the protestors have since eased their opposition to Gotabaya, supporters of Basil are still strongly against him as speculation is rife that the former president plans to return home and enter parliament.