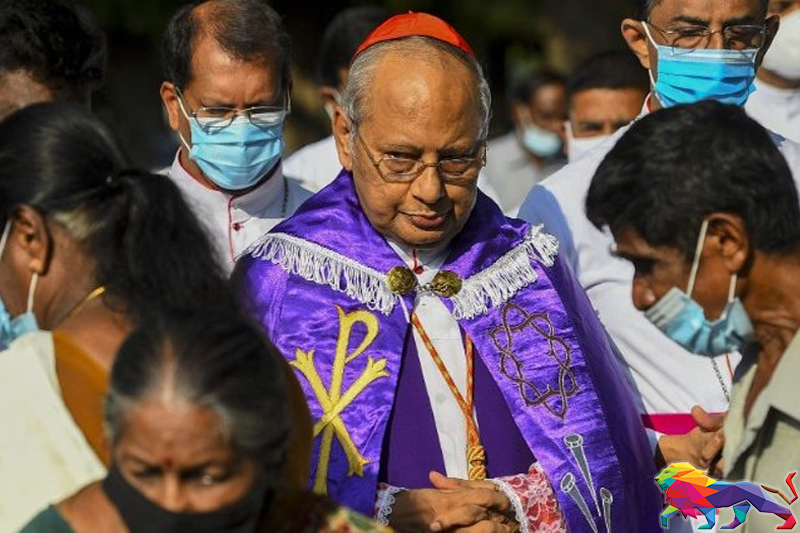 The arrest of an outspoken young Catholic activist in Sri Lanka on Monday has drawn the condemnation of the country’s prominent Church leader, who expressed concern over the threat to the freedom of expression and the return of the dreaded ‘white van” culture in Sri Lanka.

Shehan Malaka Gamage was taken into custody by the Criminal Investigation Department (CID) of Sri Lanka Police under dramatic circumstances while he was walking on the road.

He streamed his chaotic arrest in a video on Facebook. It shows the activist demanding the document warranting his arrest from the plain-clothed men who came in a white van.

Cardinal Malcolm Ranjith of Colombo on Tuesday lashed out at the arrest saying it was an “abduction”.

He said the government was targeting those who criticized its failure to properly investigate the 2019 Easter Sunday terrorist attacks on churches and hotels, which killed nearly 270 people and injured at least 500.

Gamage is among the several activists who have been campaigning for justice and seeking the truth behind the suicide bombings that have been blamed on Islamist terrorists.

The Catholic activist has publicly questioned whether politicians used the bombings to force a change of government in the presidential elections later that year, which saw Gotabaya Rajapaksa come to power.

Police Spokesperson Nihal Thalduwa told Sri Lanka’s independent news network, Newsfirst, that Gamage was arrested for a comment he recently made with regard to the Easter Sunday attacks.

He was arrested on the advice of the Attorney General (AG), who acted on details submitted by the CID, after they had interrogated Gamage for 8 days in August and September 2021, about a speech he delivered at a press conference held on 17th August 2021 in relation to the Easter attacks.

An ‘abduction’, not arrest

Cardinal Ranjith slammed the police over the manner of the arrest, demanding that the police should be in uniform when arresting someone and use an official police vehicle, not a white van, which recalled the way many people were abducted and made to disappear in the 1980s and later, and were never heard of.

“Police officers must read the charges against any accused when making an arrest,” he said, adding Gamage was not arrested but abducted in broad daylight. He described the police method as uncivilized and immoral, which is not suitable for a democratic community.

“If Gamage did not go live on social media, the country would have never known that he was being forcefully taken away by a group in a white van. He had the courage to reveal this to the country.” Cardinal Ranjith urged fellow citizens to respond to the attempts being made to suppress the truth through intimidation, Newsfirst reported.

On Tuesday, the Maligakanda magistrate's court granted Gamage bail and imposed a travel ban on him.

The 74-year-old cardinal has been long pressing Rajapaksa's government for the truth behind the Easter bombings, saying that the country's top law enforcement officers had failed to arrest the real conspirators behind the bombings, despite filing charges against some of those directly involved.

The cardinal wrote a letter to Rajapaksa last year raising questions over allegations that some members of state intelligence knew and had met with at least one of the attackers.

The cardinal, whose 2 churches of the archdiocese were targets of the Easter bombings, also took a swipe at the present Attorney General, stressing he is a public servant, not a political stooge.

He pointed out that the AG is expected to enforce the recommendations of the Presidential Commission of Inquiry that probed the 2019 Easter Sunday Attacks. Instead, he is making attempts to arrest those who are calling for justice over the terror attacks.

The Cardinal suggested that the country's attorney general and police chief were acting “on the whims of those in the political world.”

The churchman requested “the people to understand the conspiratorial conduct of the government” and “respond to it at the appropriate time,” He reiterated that if the issues cannot be solved locally, he would not hesitate to take it to an international level.

Father Cyril Gamini Fernando, a member of the Colombo archdiocesan committee seeking the truth behind the Easter attacks, also expressed concern over the return of the ‘white van’ culture in Sri Lanka.

“We cannot approve this conduct, as such a culture is not something that is good for democracy,” he told reporters on Monday. “Everyone has the freedom to speak and express. That is a fundamental right of every person,” he said, expressing the fear of an emergence of a culture where people are arrested and detained for criticizing the state.