A significant depreciation on the Sri Lankan rupee was observed after entering into a currency swap agreement with China as it cannot be used for the strengthening of foreign reserves.

In the wake of depleting foreign exchange reserves, Sri Lanka rupee is putting pressure on the balance of payments, an eminent economic expert said.

The demand for dollars remains high in the open market and there is less demand for Yuan as no country is dealing with such currency, he said, adding that the USD 400 million currency swap with India has helped to maintain the rupee stable for even a small period.

According to a veteran economic expert and financial analyst, a sufficient inflow of foreign exchange is needed to reverse rupee depreciation and it has shown some stability after receiving the Indian currency swap of USD 400 million which has boosted foreign reserves.

The recent currency swap deal with China is also unlikely to meet this requirement of boosting foreign reserves as it is a Chinese currency facility and not a dollar one, he pointed out.

“Since the swap is in Yuan, the government can only use that money to pay import bills. This is useful since China is one of the biggest import destinations with Sri Lanka regularly importing about USD 3.5-4 billion in goods," he observed.

"But it will not top up reserves and that is what Sri Lanka really needs,” he added.

On March 10, State Minister of Finance Ajith Nivard Cabraal announced that the People's Bank of China had approved a 10 billion Yuan currency swap with Sri Lanka.

The rupee has depreciated to Rs. 203.50 against the US dollar on April 08 from Rs. 198.66 on March 10 in ten days after entering into a Chinese currency swap agreement, Central Bank data showed. 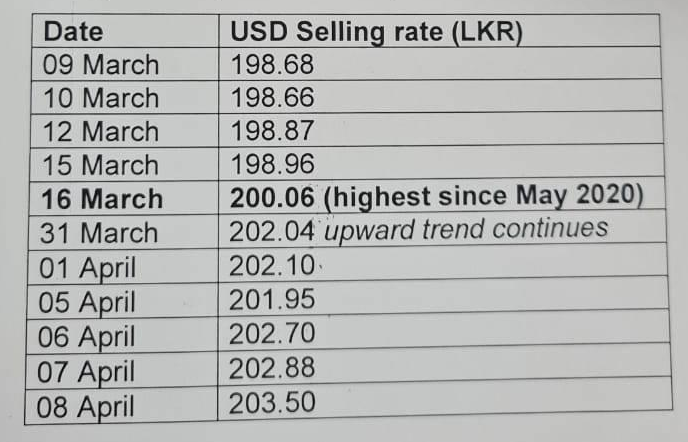 When currencies depreciate, the price structure of the country is pushed up and more taxes have to be charged and the prices of energy and food commodities go up, reducing the real salaries of the working class and pushing up running costs of the government and companies.

In the downturn that follows a currency collapse, taxes on the public have to be raised to cover government spending, especially salaries of state workers.

Meanwhile, Opposition lawmaker Dr. Harsha de Silva said that Sri Lanka’s external problem is linked to medium and long term solvency requiring debt restructuring and is not a short term liquidity problem that can be solved by swaps.