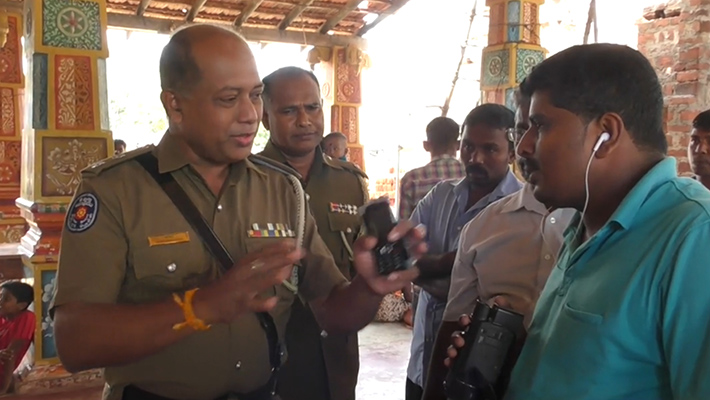 Police spies in the war affected Northern Sri Lanka have obstructed journalists carrying out their duty and intimidated Tamils remembering the dead.
Tamil people had assembled at the Oddusuddan Sivan Kovil in Mullaitivu district to observe fast to commemorate Rasaiah Parthipan, commonly known by the nom de guerre Lt. Col. Thileepan of the LTTE, who fasted unto death 33 years back demanding the Indian government to respect the pledges made to the Tamil people.


Despite efforts by the Government to stop the remembrance event people observed fast in various temples. As such Tamil people and politicians jointly organised a fast at the ‘Thanthondreeswarar Kovil’ in Oddusuddan. 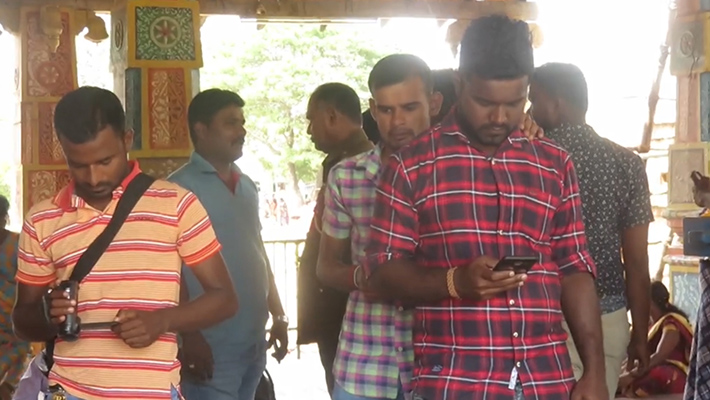 A large group of uniformed and civil clad police officers were deployed at the Temple.

A large posse of uniformed and civil clad police and intelligence personnel were deployed at the Temple with a view to intimidating and stopping them from sharing their thoughts with the media on camera.
The public said the presence of the Police and intelligence at a solemn event was not only menacing but seriously threatening in nature.


When the public expressed their feelings on camera, the state police and intelligence started recording that on camera.
A tense situation prevailed when the journalists and the public appealed to them not to record their interaction with the media.

Journalists explained to the police that the public would fear for their safety when they are videographed as they share their thoughts with the media.

“People are afraid to speak to journalists when intelligence officers standing behind us are recording,” senior Tamil journalist Shanmugam Thavaseelan told a senior police officer in uniform.

An intelligence officer in civvies told that the police needs the recording to report the event to his seniors.

Requests from journalists to allow them to carry on reporting without hindrance was brushed aside by the police and the intelligence officers who were adamant in continuing their recording which irked the journalists and threatened the public.

Fearing for their safety as the intelligence continued with their video recording, the public discontinued their fast mid day and moved away from the Temple premises and recorded their opinions with the media.

“We assembled here at the Oddusuddan Sivan Kovil to emotionally recall the death of Thileepan who sacrificed his life after fasting for 11 days without even consuming water,” said one attendee.

"Police and intelligence created trouble for us and we were unable to independently pay our homage to him. We were unable to share our thoughts with the media as the atmosphere there was very tense."

While the government claims that media freedom is ensured under the new dispensation, the act of the Police and their intelligence unit amount to strangulating media freedom and intimidating the public and politicians.

The public says this incident is an example of intimidation with an iron fist and sending across the message that dissent will not be tolerated.

As the public dispersed few spoke to the local media who said the government ban on the remembrance is an attack on Tamil culture itself.

“The new government in power today has stopped us from remembering Thileepn who protested in a nonviolent way for the liberation of our Tamil Homeland in the North and East. Remembering the dead and praising those who fought for our liberation is part of our Tamil Culture. But the present government is behaving in a biased manner and stopping us from doing that.”


They demand that rights should be respected and be allowed to exercise their feelings without any state interference and intimidation.
They also say their freedom of expression is threatened and in future it should be ensured that their rights are protected and they have the freedom to remember the dead.