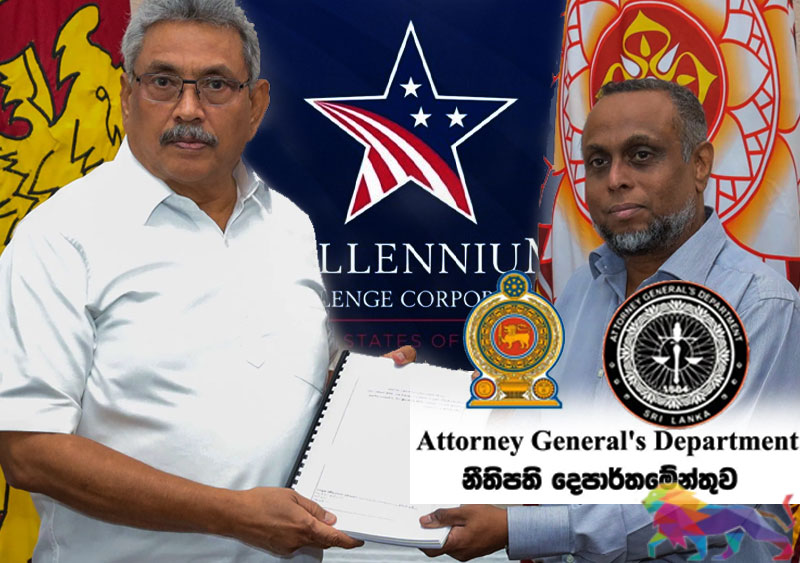 The Attorney General's Department has confirmed in writing that the Millennium Challenge Corporation Agreement (MMC) does not violate any law in Sri Lanka.

Presenting the official opinion of the Attorney General's Department on the contents of this Agreement, Senior Additional Solicitor General Sanjaya Rajaratnam PC in a letter dated 10.10.2018 has confirmed in writing that there is no impediment to the signing of the MCC Agreement or the implementation of the project under Sri Lankan law.

The Attorney General's Department has also informed the MCC Office in Sri Lanka that it would be appropriate to obtain the approval of Parliament to establish the Sri Lankan Agency proposed to implement the MCC Agreement as a non-profit company.
Caption: Letter conveying the opinion of the Attorney General's De[artment with regard to the MCC agreement

However, despite the Attorney General's Department stating this view, a "special committee" chaired by the current government and headed by Prof. Lalithasiri Gunaruwan, has stated that the agreement could violate Sri Lankan laws.

President Gotabaya Rajapaksa has instructed the cabinet before the last general election to study the Gunaruwan report and submit its observations.

Here are 6 ill-conceived details included in the Gunaruwan report : 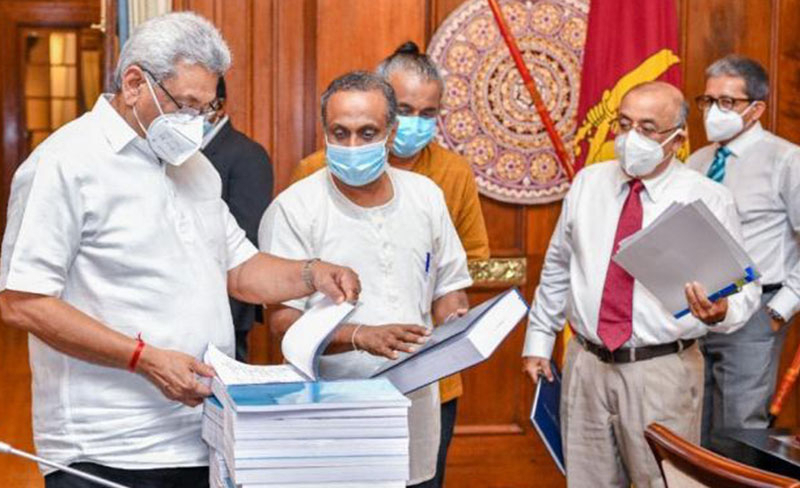 1) 'Under the MCC programme, US$ 10 million was given to the previous government and that money cannot be traced.'

No such amount has been paid to the previous government or this government under the MCC programme. Although there was an initial agreement to spend $ 10 million on the preliminary work related to the MCC Agreement, nothing happened due to the political turmoil that erupted in October 2018 and the situation in the country thereafter. Thus, the above statement contained in the report of the Gunaruwan Committee is completely false.


2) ''MCC Agreement Contradicts the Constitution and Sovereignty of Sri Lanka''


3) "Serious confusion arose in countries such as Peru, Uganda and Sierra Leone, where land programs such as the proposed land program in Sri Lanka with MCC assistance were implemented."

This is completely baseless and false information. Peru, Uganda and Sierra Leone have not launched any MCC-assisted land projects.

4) "Diplomatic immunity will be accorded for a large number of American officers and members of the 'US Army' under the MCC Agreement."

Under this agreement, only two top U.S. government officials serving on the MCC staff are entitled to such immunity. No one else has such immunity. However, based on this misinformation, false reports have been made that "even US troops" who claim to be entering the country will receive diplomatic immunity under this pretext.

5) "Is there a risk of foreign companies and outsiders obtaining information about land in Sri Lanka?"

This is also an attempt to mislead society based on misinformation. Land laws in Sri Lanka are very strong and foreigners cannot buy land in the country at will. All this is done not through the MCC office but through the local agency established on a proposal by the Government of Sri Lanka. Also, the Ministry of Lands, the Survey Department and the Sri Lanka Institute of Information Technology (ICTA) directly manage all these activities. All information on land related projects in Sri Lanka is the responsibility of the Ministry of Lands and its affiliated government agencies and there is no opportunity for foreign parties to interfere in any matter.

6) "Intellectual property clauses may create problems for projects in this country."

The purpose of these intellectual property clauses is to apply non sensitive, non-confidential public models created by one particular MCC office for projects in other countries. It was introduced with the aim of speeding up and streamlining the aid process in every country. But important points that are revealed after the launch of the project is not shared with outside parties for any reason.