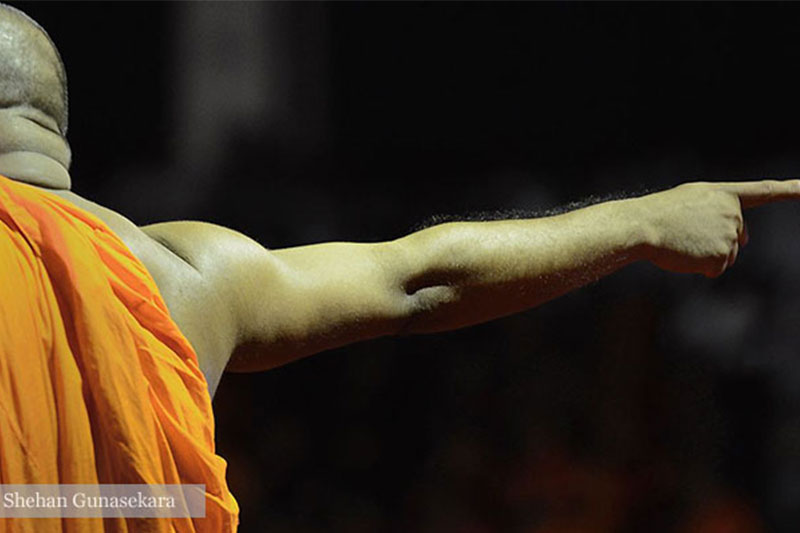 Sri Lanka has been warned that the government’s failure to rein in Buddhist extremist groups enjoying impunity while unleashing violence against minorities, threatens to propel the country into a vicious cycle of ethnic-religious violence.

In a damning report on the country’s treatment of minorities, an independent expert appointed by the UN to identify challenges to the right to freedom of religion or belief, highlighted the danger of Sri Lanka’s government continuously providing patronage to Buddhist hardliners.

“It is essential for the Government to not ignore the simmering tensions and intolerance and the damaging consequences of incitement to hatred and violence in a country that has gone through a long period of internal conflict,” said Special Rapporteur Ahmed Shaheed told the UN Human Rights Commission in Geneva.

“Inaction by the authorities could aggravate the simmering tensions and if these were left unattended, Sri Lanka may risk being locked in a vicious cycle of ethno-religious violence.”

The special rapporteur was in Sri Lanka from 15 to 26 August 2019, on the invitation of the government. He had met government officials and representatives of local rights bodies as well as victims of religious violence.

Highlighting the government’s reluctance to act against hate crimes by organisations of the majority religion, the report refers to Bodu Bala Sena (BBS - Buddhist Brigade) led by Buddhist monk Galagodaththe Gnanasara among other organisations.

It notes that hundreds of hate-related incidents were reportedly committed by the BBS and other Buddhist extremist groups with impunity. This is despite a former UN Secretary-General Ban ki Moon, expressing his alarm and concern by “the rising level of attacks in Sri Lanka against religious minorities” as early as 2014.

BBS Chief Galagodaththe Gnanasara was released from jail in May last year by a presidential pardon after serving nine months of a six-year sentence for contempt of court.

After the bombings, more than 2000 Muslims have been arrested under the Prevention of Terrorism Act (PTA) in army and police raids of mosques and madrasas across the country.

“Families of Muslims arrested under the PTA claimed that they had a hard time to secure legal representation in their areas and had undergone significant financial hardship to hire lawyers from other areas,” said Special Rapporteur Shaheed.

“Most of the Muslim lawyers have been reluctant to appear for those arrestees in fear of reprisals. Moreover, the Rapporteur received reports that there were often refusals by non-Muslim lawyers to defend those detained due to ‘extraneous considerations’.”

The report expressed concern over Government allowing the influence of religious clerics to determine public policy in secular matters.

Special Rapporteur Shaheed called the attention of the UNHRC to Sri Lanka’s misuse of legal provisions aimed at curbing racial hatred. In particular he referred to the International Covenant on Civil and Political Rights Act (ICCPR Act) 2007.

“Although inciting to discrimination, hostility and violence is criminalised under the ICCPR Act, many argued that the Act was not applied in a manner that would protect minorities against incitement; rather, it is invoked to protect religions or beliefs against criticism or perceived insult.”

The writer and the monk

Sri Lanka’s ICCPR act was used to imprison award winning writer Shakthika Sathkumara for over four months, for publishing a short story on Facebook. Last April he was arrested following a complaint by an extremist Buddhist outfit that his work of fiction was derogatory and defamatory to Buddhism. He was in detention when Dr Shaheed was on the ten-day visit and later released under strict bail conditions. The charges against him are still pending and he could face up to 10 years in prison if found guilty.

While Shakthika was in detention, one of the country’s topmost Buddhist monks, Warakagoda Gnanarathana who called for the boycott of Muslim shops and the stoning of Muslims. No legal action has been taken against him.

“ICCPR Act has ironically become a repressive tool curtailing freedom of thought or opinion, conscience and religion or belief,” said Dr. Ahmed Shaheed in his report to UN on Sri Lanka.

He recommended that the Government of Sri Lanka address impunity and the lack of accountability urgently by fulfilling the pledges to various international human rights bodies and set up relevant mechanisms accordingly.

The Government has rejected the report by the Special Rapporteur as 'inaccurate'.

"Therefore, the Government rejects the inaccurate references in the SR’s report to “serious concerns” regarding “Sri Lankan security forces colluding with mobs and not acting to prevent or stop the violence”; the “lack of response from the authorities against this violence”; and the claims that “acts of violence are indulged by the silence and inaction from the authorities”. It is regrettable that these inaccurate accounts have been included in the report, even after they have been fully rebutted and explained by the Government soon after the alleged incidents", said Sri Lanka's foreign Ministry in a statement made at the Interactive Dialogue of the 43rd Session of  Human Rights Council with the UN Special Rapporteur.

However, a day before the release of the report by Special Rapporteur on freedom of religion or belief, Sri Lanka informed the UNHCR of its decision to pull out from commitments to promoting reconciliation, accountability and human rights in the country.
(Source: JDS)