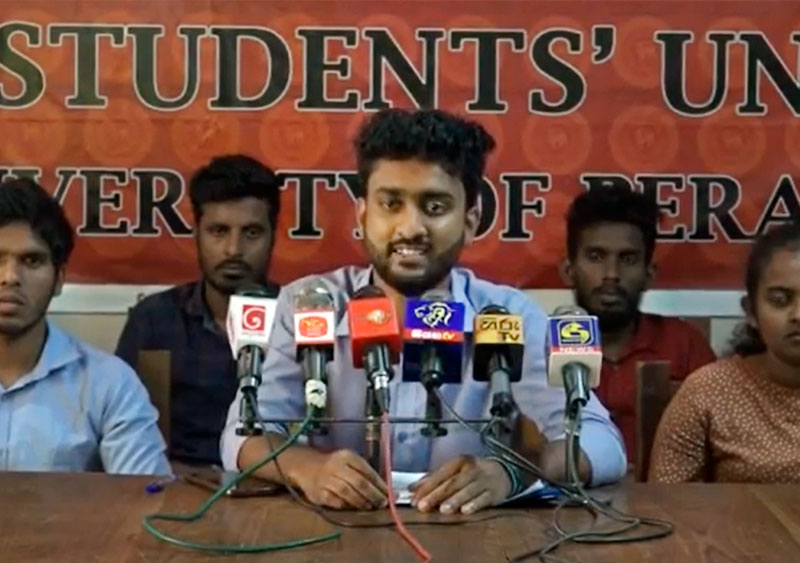 The Students’ Union of Peradeniya University has unreservedly condemned the incident that took place in the university premises on December 10.

Speaking to the media yesterday (13), its president Chamod Thathsara said they would extend fullest support to an impartial, speedy and correct investigation.

Referring to the incident, he said the students got involved in a clash on that day not with the former vice chancellor or his son, but a drunken and careless driver, with added conceit, who had violated the country’s basic laws.

It had gone too far by the time the person was identified as the son of the ex-VC, said Thathsara.

The media is reporting the incident in a most malicious and one-sided manner, he charged.

According to him, a drunk man in a car hit two motorcycles parked near the Sarachchandra outdoor theatre and tried to flee.

Students ambushed and stopped him, and when inquired he claimed in a drunken rage that it was his father’s campus and that he can do anything.

He promised to pay damage for the motorcycles before police arrived some time later, handcuffed him and took him in a jeep.

But, he was taken to hospital and he returned some hours later and spoke to the media with a totally different picture of the incident, charged the students’ leader.

Students who complained to the police were tested for alcohol, but the VC’s son was not tested, he said.