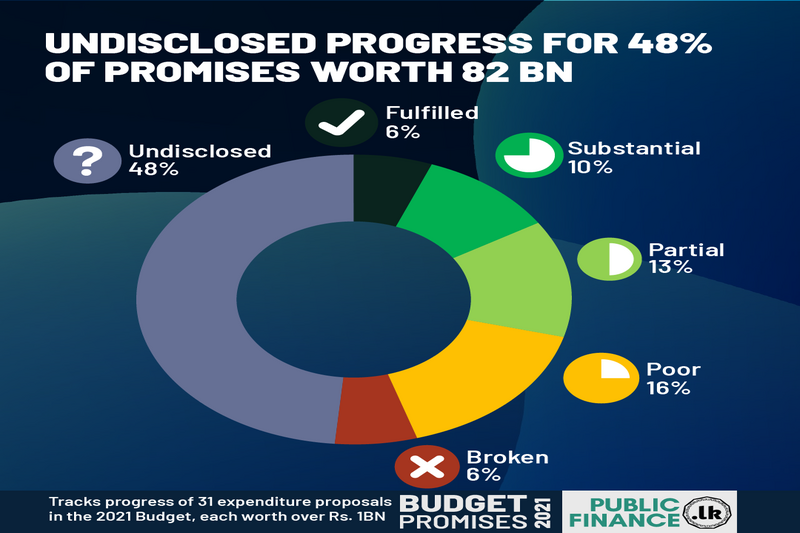 The progress made in the 31 promises contained in the 2021 budget is six per cent only, said Verité Research in a report.

The report provides an assessment and analysis of the fiscal, financial and economic assumptions and estimates applied in the formulation of the 2022 budget.

This report has two major sections.

The first deals with the flawed assumptions and estimates used in the formulation of the budget and the second deals with issues in informational standards and gaps in due diligence.

It said a lack of visibility of execution of the annual budget of the government contributes to poor management.

Two studies conducted by Verité Research over the past year highlight a lack of visibility to be a key factor that erodes public confidence in government budgets.

The studies revealed that Sri Lanka ranks low on budget transparency compared to the rest of the world.

As per the 2021 Open Budget Survey (OBS), Sri Lanka was ranked 93rd (out of 120 countries) globally for budget transparency. 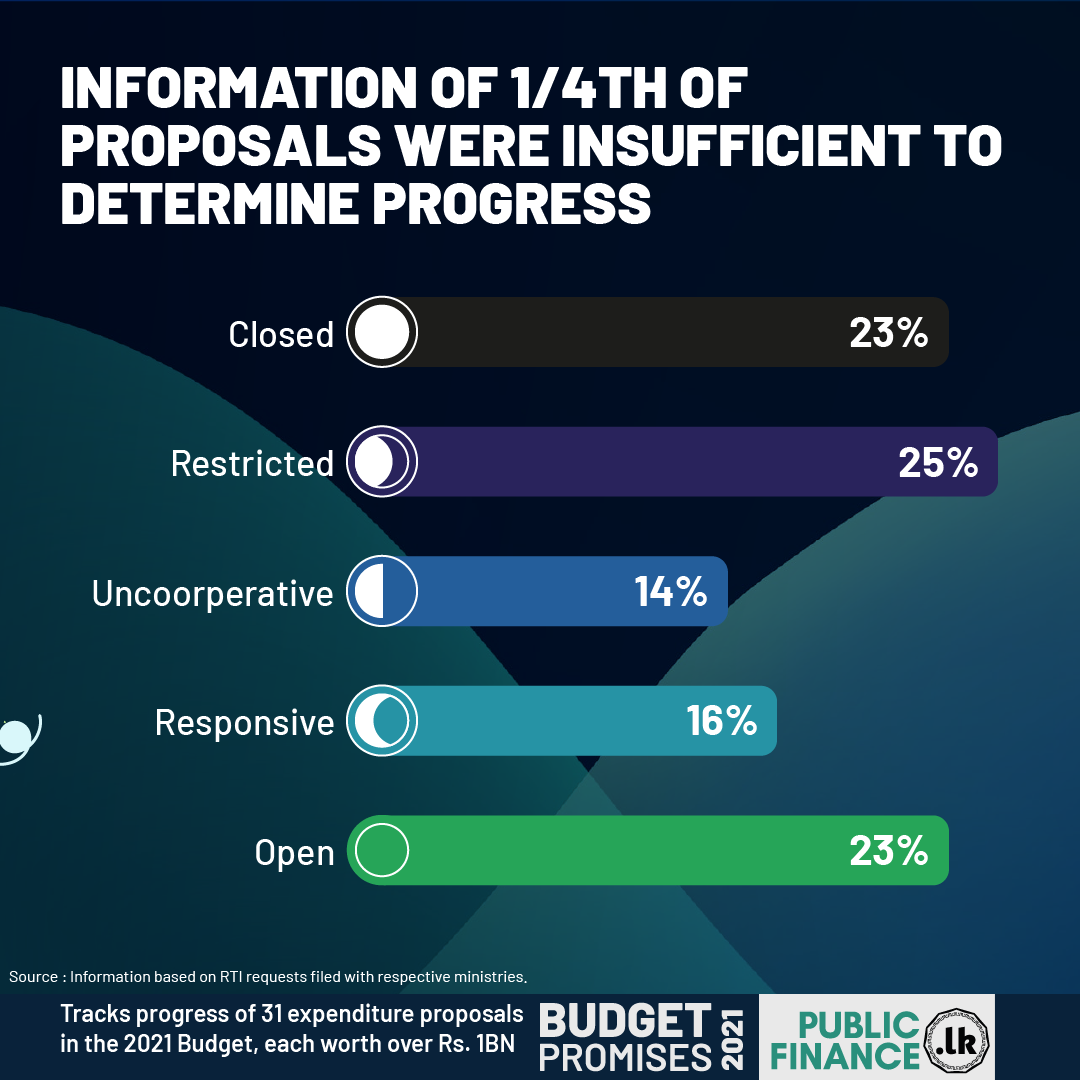 2. Progress of budget proposals worth Rs. 81.5 billion remains a secret, Verite Research notes, adding the budget promises it has dashboard tracks the progress and transparency of Sri Lanka’s national budget each year.

Of the proposals tracked from the 2021 budget, no information was available to assess the implementation of budget proposals accounting for Rs. 81.5 billion. 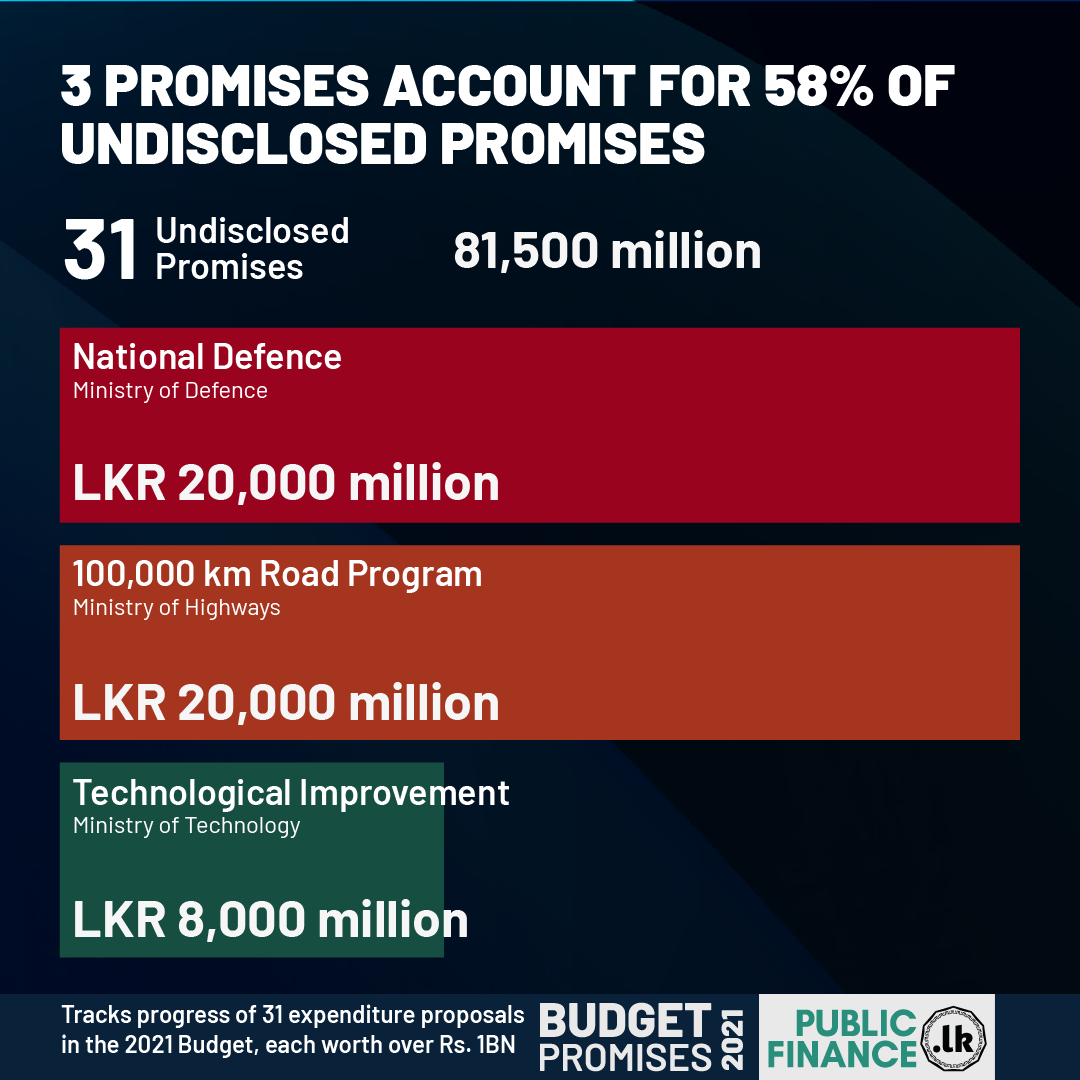 3. Only six pc of promises made in the 2021 budget were fulfilled.

This means that the government fully implemented just six pc of the projects planned for 2021, neglecting key development projects related to provision of health services, water supply and children’s education.

Based on its research, Verité Research made several recommendations to both the current and future governments, to improve public finance management in Sri Lanka and build lost confidence.

They include making realistic promises/policies, devising well-formulated policies that are backed by supporting documentation on evaluation and selection criteria and ensuring systems to inform the public of how their taxpayer funds are being utilised.

Also, utilising ministry websites to disclose information in a timely, user-friendly and consistent manner and limiting unnecessary bureaucracy, fragmentation of ministerial portfolios and ensuring line of accountability when funds are disbursed are also included.

Implementing a robust system of checks and balances and allowing formal mechanisms for oversight already in place are allowed to carry out their functions unhindered.

This includes parliamentary committees and the national audit office.