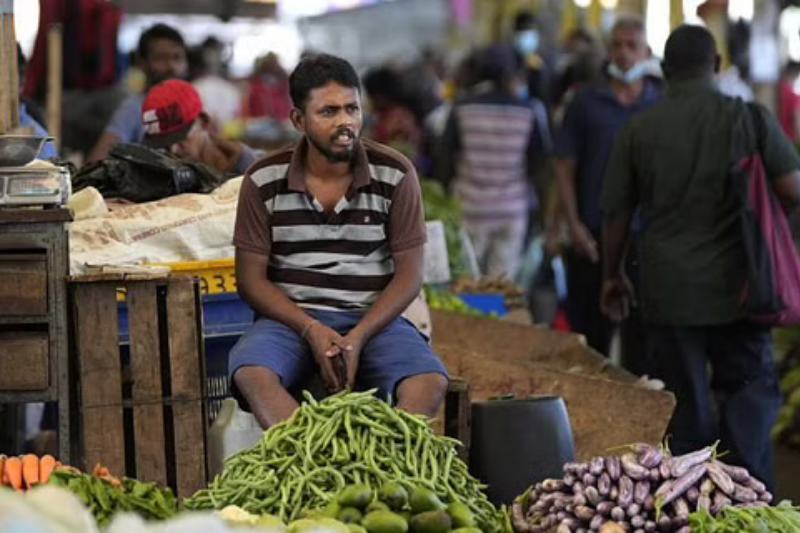 A vendor waits for customers at a vegetable market place in Colombo, Sri Lanka. (Photo | AP)

In the face of record food price inflation, skyrocketing fuel costs and widespread commodity shortages, some 6.26 million Sri Lankans, or three in 10 households, are unsure of where their next meal is coming from, according to the latest food insecurity assessment from the World Food Programme (WFP), released on Wednesday.

As prices keep healthy meals out of reach, some 61 per cent of households are regularly using coping strategies to cut down on costs, such as reducing the amount they eat and consuming increasingly less nutritious meals.

And with opportunities to make enough income in the medium to long-term decreasing for an estimated 200,000 families, the UN food relief agency anticipates that even more people will turn to these coping strategies as the crisis deepens.

“These days, we don’t have a proper meal but eat only rice and gravy,” one woman told WFP.

Amidst a staggering 57.4 per cent inflation rate, steeply increasing food prices have crippled the population’s ability to put sufficient and nutritious meals on the table, rendering two in five households without adequate diets.

The food security situation is worst among people working in the farming estates sector – such as large tea plantations - where more than half of households are food insecure, according to WFP.

In all measures of food insecurity and coping strategies, these households have consistently poorer outcomes than urban and rural populations.

While urban households are depleting savings to cope for now, families on rural estates are already turning to credit, in order to buy food and other necessities.

“Poor families in cities and those who work on estates have seen their incomes plummet while market prices have soared,” the WFP official said.

Sri Lanka is suffering its worst economic crisis since gaining independence in 1948, which comes on the heels of successive waves of COVID-19, threatening to undo years of development progress and severely undermining the country’s ability to achieve the Sustainable Development Goals (SDGs), said WFP.

A current oil supply shortage has forced schools and government offices to close until further notice.

The economic crisis will push families into hunger and poverty – some for the first time – adding to the half a million people who the World Bank estimates have fallen below the poverty line because of the pandemic.

To address the downward spiralling situation, last month WFP launched a $60 million emergency appeal for food and nutrition to assist three million of the most at-risk Sri Lankans.

“We must act now before this becomes a humanitarian catastrophe,” warned WFP chief David Beasley in a tweet.

To date, the agency has delivered 88 per cent of the first batch of 2,375 vouchers it has available, and targeted three million people to receive emergency food, nutrition, and school meals, until December.

As prices keep healthy meals out of reach, some 61 per cent of households are regularly using food-based coping strategies, such as reducing the amount they eat and consuming increasingly less nutritious food.

And with the medium- to long-term income-generating capacities at severe risk for an estimated 200,000 families, the UN food relief agency anticipates that even more people will turn to these coping strategies as the crisis deepens.

“These days, we don’t have a proper meal but eat only rice and gravy,” one woman told WFP.

Amidst the unprecedented economic turmoil in the country, Sri Lankan Prime Minister Ranil Wickremesinghe said that steps will be taken to mitigate the food crisis in the island nation.

Addressing a meeting of the Committee of Food Security on June 18, Premier Wickremesinghe said that more than five million people will be directly impacted by the food crisis in Sri Lanka, and measures will be taken to contain it.

Wickremesinghe has directed officials to prioritise the fishing community in terms of providing them with food, gas, and fuel.

Meanwhile, food security for children's homes, nursing homes, and homes for persons with disabilities was given special emphasis, including the need to formulate a long-term plan for a modern agricultural system for the creation of a competitive market.