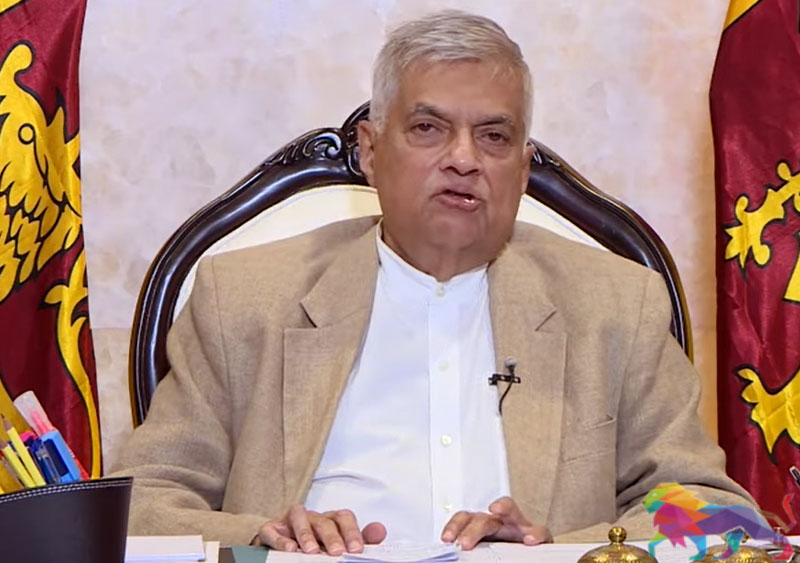 Prime Minister Ranil Wickremesinghe announced the 21st Amendment to the Constitution in an official statement on Sunday (29) in order to make the President and cabinet accountable to Parliament.

Mr. Wickremesinghe pointed out that the existing laws need to be strengthened in order to give those powers to Parliament in the exercise of monetary powers.

Following the example of countries such as the United Kingdom, New Zealand and India, we are proposing a stronger and more powerful law, he said in a televised addressed to the nation.

The Prime Minister also said that protesting youth groups will be invited to be part of governance under the proposed political reforms.

Full text of the statement by the Prime Minister is as follows:

"Today, the main issues in our country are not limited to the economic sphere.

There are also two major issues in the political sphere. The re-introduction of the 19th Amendment is one of these issues. We, as Party Leaders, are now preparing the 21st Amendment in this regard.

The second issue is to work towards the abolition of the Executive Presidency. The timing and methodology must be decided by the Party Leaders.

There is an allegation that even though the ruling party had a majority in Parliament they neglected the work of the Parliament. Everything was systematically controlled by the Cabinet Ministers.

We do not always have to look at what happened in the past, but there are examples we can follow.

Before the independence of Sri Lanka, there was a State Council from 1931 to 1947. That State Council functioned following the committee system. Each subject was divided into seven committees. The Chairmen of the Committees became Ministers. The seven Ministers had formed a Cabinet. In addition, there were three officials appointed by the Governor.

In addition, there was an Accounts Committee to control public money. At that time, we had the opportunity to carry out this methodology successfully.

Now we need to change the structure of Parliament and create a new system by combining the existing system of Parliament or the Westminster system and the system of State Councils. In those cases, Parliament can participate in governing the country.

First of all, the existing laws need to be strengthened in order to give those powers to Parliament in the exercise of monetary powers.

Following the example of countries such as the United Kingdom, New Zealand and India, we are proposing a stronger and more powerful law.

In addition, we are bringing recommendations forward.

We are working to establish two new Committees on Monetary Affairs. We will appoint a Legal and Methodological Committee to look into the matter.

Therefore, we have the opportunity to work out a methodology that is independent of the Cabinet of Ministers and works with both the Minister and the Parliament.

The youth are calling for a change in the existing system. They also want to know the current issues. Therefore, I propose to appoint four youth representatives to each of these 15 committees. One of them will be appointed by the Youth Parliament. The other three will be from the protesting groups and other activist groups. The methodology used to chose these individuals can be decided by the youth organizations themselves.

In addition, we hope to involve people with expertise in specific fields in this work. Through this work, young people will be able to learn about problems and provide solutions to them on their own. They will be able to contest elections if they wish to do so.

We also propose a National Council. A committee consisting of the Speaker, the Prime Minister, the Leader of the Opposition and the leaders of the major parties is called the National Council.

The National Council has the right to summon the Cabinet of Ministers and the Chairmen of Committees.

There is a system in place to control the Government through the Cabinet, to examine the work of the President, to oversee the work of the political affairs through the National Council and to oversee the financial affairs and other matters of the other fifteen committees. There are articles prepared on this matter. I appreciate that a number of other organizations have made similar proposals.