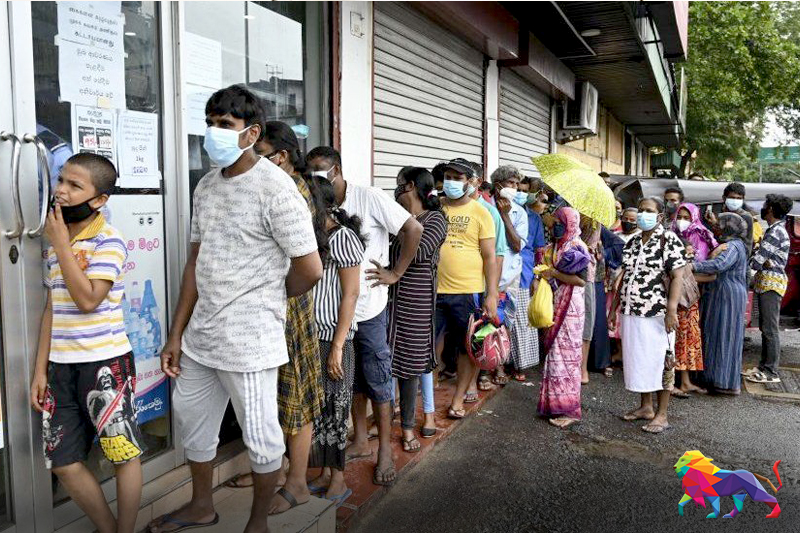 The National Consumer Price Index (NCPI) released by the Sri Lankan Central Bank early last week shows steep increases in the price of food and other essentials, pointing to the worsening social crisis confronting workers and the poor across the island.

Inflation hit 16.8 percent in January, calculated on a year-on-year basis, compared to December, which recorded 14 percent. In January 2021, the inflation rate was 3 percent, climbing to 6 percent in September, followed by steep rises since then.

Last month, prices in the NCPI’s food group increased to 24.4 percent, up from the 21.5 in December, with increases recorded in all essentials, including rice, infant and other milk powders, wheat flour, bread, vegetable, dhal, chillies, coconut and coconut oil, dried and fresh fish, and chicken.

Inflation is just one component of Sri Lanka’s economic and social problems that have been exacerbated by the COVID-19 pandemic. According to the island’s undercounted official figures on Sunday, total cases of COVID-19 are 644,090 and the death toll is 16,190.

The Rajapakse government, in line with big business demands and other governments internationally, has implemented the dangerous “living with the virus” policy ensuring a rapid spread of infections. Workers and the poor are paying the price of these criminal policies with deaths or long-term health impacts and unbearable economic hardship.

The last month’s Food and Agriculture Organization (FAO) report on Sri Lanka noted that the rising cost of essentials was “severely affecting access to food amid widespread income losses and reduced purchasing power related to the COVID-19 pandemic.”

It added: “As rice, wheat and sugar products account for about 40, 12 and 10 percent, respectively, of the average calories intake, vulnerable households have likely reduced their food consumption and/or switched to comparatively cheaper but less nutritious foods, with an overall negative effect on their food security, health and nutrition status.”

The pandemic has drastically impacted Sri Lanka’s revenue from exports, tourism and remittances. Declining foreign reserves and the depreciation of the rupee have produced significant increases in the cost of imported food items.

In January last year, a US dollar cost 187 rupees, by December it was 202 rupees. The real exchange rate in December was 250 rupees for a dollar, a 34 percent devaluation.

Citing Central Bank figures, the FAO noted that there had been a 50 percent increase in the price of rice, the country’s main staple food, over the past year.

The already high cost of rice and vegetables will increase further because of crop failures caused by President Rajapakse’s import ban last April on chemical fertilisers and pesticides. The bans, he claimed, would lead to 100 percent organic cultivation.

The bans have devastated paddy and vegetable cultivation, with some estimates indicating a 50 percent drop in the harvest. This will further hit poor farmers already on low incomes and see further price rises and food shortages. Facing massive opposition from farmers, the government lifted the fertiliser ban in November but withdrew previous subsidies.

The FAO report stated that the high cost of agricultural inputs “will likely result in their reduced application, with a negative impact on yield of the 2022 main season crop and that production costs are also anticipated to rise.” 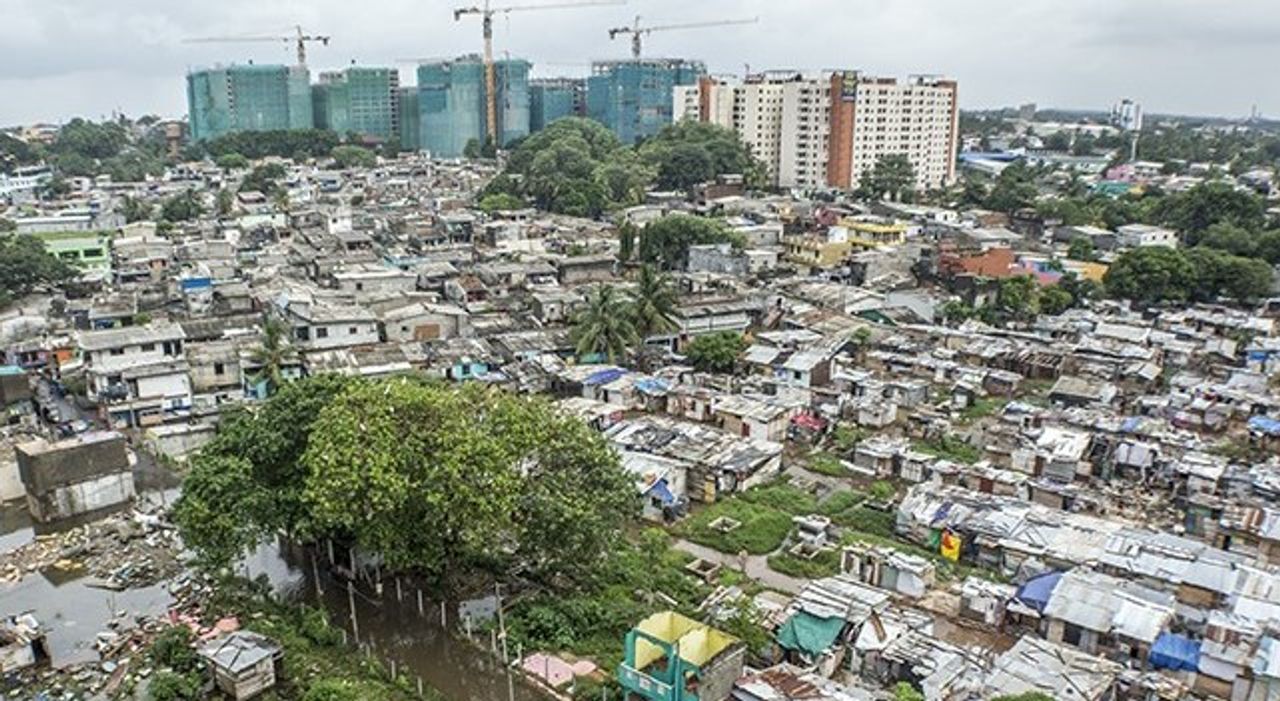 The rising inflation and shortages come on top of the already dire conditions facing working people. As last year’s World Bank Group report entitled The COVID-19 impact on livelihoods and the poverty in Sri Lanka noted: “The COVID-19 crisis increased international $3.20 poverty rate from 9.2 percent in 2019 to 11.7 percent in 2020; this change translates into over 500,000 new poor people.”

The report adds that many workers in Sri Lanka “do not have access to employment protection or other job-related social protection benefits, making them vulnerable during times of economic crisis.”

Informal sector employment in Sri Lanka is estimated at 5.5 million, or 68 percent of the total work force, and includes 2.4 million temporary or casual employees. About 700,000 have no permanent employment. Price increases have been impacted on public sector employees' wage rates over the past year.

Since the pandemic began, the Sri Lankan government has bent over backwards to bolster big business with tax concessions, while the banks have maintained low interest rates and made available billions of rupees.

This has translated into massive profits for the big companies and record prices on the Sri Lankan stock market, even as Colombo maintains multi-billion payments on foreign loans. 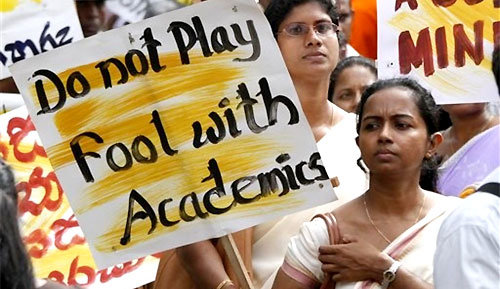 Strikes and protests by teachers, health workers and other public sector employees that erupted in Sri Lanka last year are continuing, fuelled by inflation and ongoing austerity measures. These struggles were isolated and betrayed by the trade unions without any winning any real gains.

The unions all claimed that the government, which imposed the Essential Public Service Act and no-strike bans on public sector workers, could be pressured into granting concessions. This is why workers need to build their own organisations—workplace action committees—to take their fight into their own hands.

Workers can only defend their living conditions and social rights in a unified struggle against the austerity policies of the government and big business. This must be based on a program that rallies the rural poor and fights for a workers’ and peasants’ government based on socialist policies and unity with the international working class against the war, inequality and the COVID-19 pandemic.

WSWS reporters spoke with workers this week about the dire economic situation they face.

“I am facing a very difficult situation trying to feed my family of seven people—my wife and child, my father and three sisters,” he said, and explained that he was struggling to earn enough to feed his family members and had to do odd jobs on his “free days.”

“The increasing price of goods is a grinding burden, not only for me but all people. We had to abandon using cooking gas and shift to a kerosene stove, but [because of shortages] we can’t even buy kerosene and now the price of firewood is also high. We’ve been pushed into a corner.

“We have another government that does not care about the people and the opposition parties, including the Tamil parties, are the same,” he said.

A MAS Holding garment worker in the Katunayake Free Trade Zone, originally from the rural Polonnaruwa district, had a similar story. Married with a kindergarten-aged son, he earns about 60,000 rupees a month with overtime, incentives and an attendance bonus.

“I could previously buy a five-kilo packet of nadu rice for 450 rupees. It is now 900 rupees and many essential items, including milk power, are frequently unavailable at nearby shops,” he said.

The worker also has a part-time job driving a three-wheeler taxi for additional income and spends his holidays running the vehicle.

Due to recent shortages of LPG cooking gas, his family has to use a firewood cooker but has difficulties getting any firewood. Disillusioned with the previous Sirisena-Wickremesinghe government, he decided to vote for President Gotabhaya Rajapakse and his government. He told the WSWS that he was disgusted with the government and the current situation.

Kamarajins, a former plantation worker, told WSWS reporters that the rising cost of living was unbearable.

“I left my job at our estate and went to Colombo looking for work because my wage was not enough. But the situation has not changed and the price of everything has gone up. Most plantation workers only have two meals a day,” he said.

“Plantation companies are imposing higher workloads and for less pay. A worker now has to pluck 18 kilograms of tea leaves a day to earn a 1,000-rupee wage—the previous target was 16 kilos—and if you fail to reach the estate’s target, the worker only gets half pay,” he said.