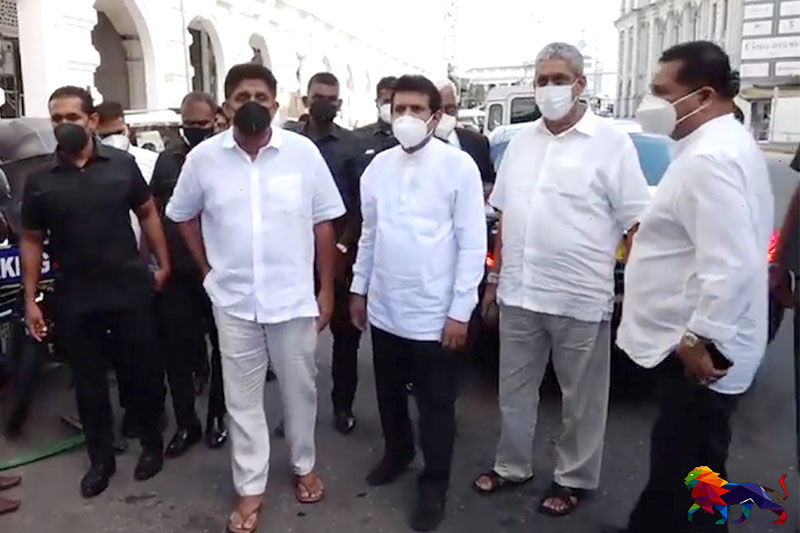 Opposition and Samagi Jana Balawegaya (SJB) leader Sajith Premadasa, along with a group of SJB MPs, arrived at the Criminal Investigation Department this morning (11).

The group was accompanying SJB MP Ashok Abeysinghe who was summoned to the CID today to record a statement on his controversial comments regarding the Easter Sunday attacks.

Speaking at a public meeting recently, Abeysinghe said it was President Gotabaya Rajapaksa and former Minister Basil Rajapaksa who had orchestrated the Easter Sunday attacks. He also said that funding for their activities was provided by Avant Garde Chairman Nissanka Senadhipathi.

Although the CID had notified MP Abeysinghe to report to the CID on two prior occasions, he had failed to show up.

Allegations against Gotabaya, Basil and Senadhipathi?

The CID has launched an investigation based on a speech made by MP Ashok Abeysinghe regarding the Easter Sunday terror attacks.

This was after six SLPP Parliamentarians had lodged complaints with the CID calling for an inquiry on MP Ashok Abeysinghe’s statement.

Furthermore, Chairman of the Avant Garde Group Nissanka Senadhipathi had also lodged a complaint with the CID urging a full investigation into the speech made by MP Abeysinghe.