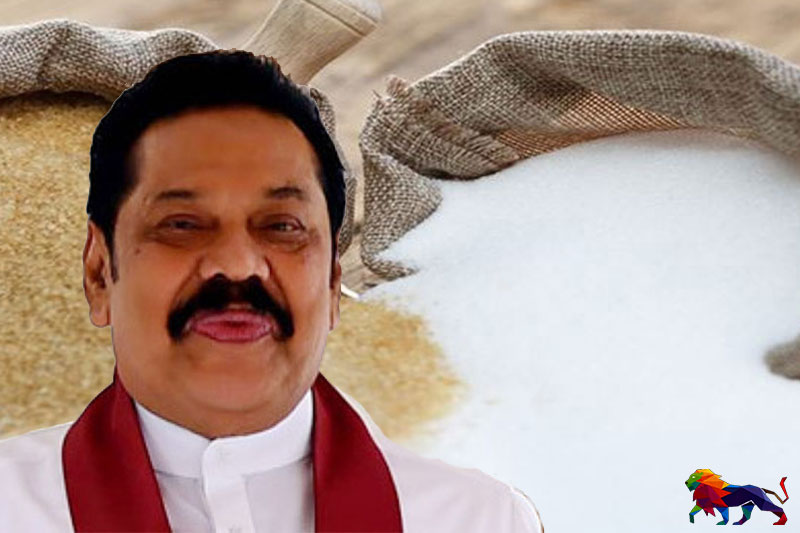 The government has decided to extend the levy of 25 cents that was imposed on sugar for another three months.

Premier Mahinda Rajapaksa as the Minister of Finance has extended the special commodity levy on sugar imports for another three months with effect from January 14, 2020.

Accordingly, the 25 cent sugar tax, which was removed at midnight on January 13, will continue to be valid until April 14, 2021.

The announcement made by the Minister of Finance also stated that an import duty of 25 cents per kilo has been levied on big onions and mysore dhal.

No place that sells sugar for Rs. 85 per kilo even though the tax is 25 cents!

In spite of all these gazette notifications, wholesale sugar traders have completely disregarded the directives issued by the Chairman of the Consumer Affairs Authority. These traders continue to sell sugar at prices they have set for themselves.
Due to the reduction of the special commodity levy to 25 cents per kilo in the last three months, nearly 230,000 mt of sugar have been imported to Sri Lanka in that period, data from the Customs Department showed.

According to trade sources, Indian traders are dumping their stocks to Sri Lanka to take advantage of the USD 90 per metric tonne export incentive accorded to Indian sugar exports.

Theleader.lk pointed out last week that the government was set to impose a levy of 25 cents from January 14 after considering the prevailing market conditions.
However, the government has lost nearly Rs 11.4 billion in revenue in the last three months due to the reduction in sugar tariffs amidst a severe financial crisis. The total cost of imports is close to USD 102 million.
The government came under heavy flak by the opposition for its ad hoc amendments with regard to taxes imposed on sugar, with critics stating that the move had only benefitted the allies of those in power and not the general public.

How many tonnes of sugar will they import?

Although import licenses pertaining to sugar imports have been formalised, five ships with around 2,500 containers have been imported in the last three months.

According to market estimates, another 200,000 tonnes of sugar is likely to be imported to Sri Lanka from India within the next three months, which will result in a further loss of Rs 9.9 billion to state coffers.
A member of the Sugar Importers' Association who spoke to us pointed out that the reduction of the sugar tax to 25 cents has led to many complications, adding that the government as well as the entire wholesale market are now facing a crisis.

He noted that the sugar trade was controlled before October 13 due to the imposition of a high tariff on sugar imports, but since then, the Sri Lankan market has been flooded with low quality sugar due to the reduction of the tariff to 25 cents.
Tile importers are now importing sugar

"Those who used to import tiles and sanitary ware are now importing sugar," he added.

Furthermore, businesses engaged in imports are questioning as to why the government, which has imposed severe restrictions on imports to save foreign exchange, has adopted a lenient policy with regard to sugar imports alone.
(By a special correspondent)