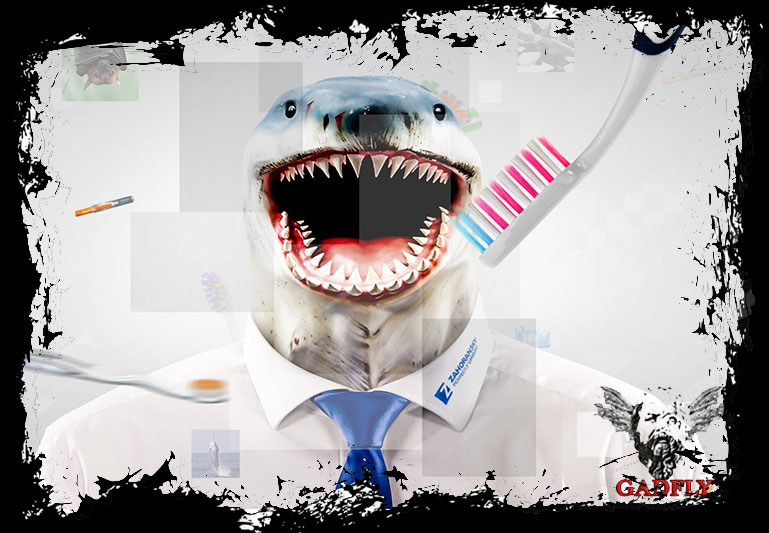 Our country has a government. This government passes laws, governs us. And underneath there’s another government: multinational company.
This not-so-subterranean government decides what we eat, what we drink and indeed almost everything that comes under the broader definition of the term ‘consumption.’ They decided if we should consume dhal, not in dhal-flavor but, say, chicken flavor. They decide which brand of soap we should use to wash clothes. They feed us MSG.

If people were fully educated about multinational corporations, this wouldn’t be an issue. The problem is that those institutions tasked to keep people informed typically act deaf and dumb.

Let’s talk teeth. Next to our parents, no one knows more about our teeth as much as multinational corporations do.

The oldest toothpaste brand in Sri Lanka is ‘Signal.’ It’s been around for more than six decades. Signal at one time enjoyed 70% of the market share. The 50% share it now owns is still very significant.   Here are some of the lovely stories that Signal has told us over this period:

When you brush your teeth with Signal…

If all this is true we won’t need dental schools or dentists because by now all manner of oral diseases would have been duly eradicated.

This has not happened though. Signal, in fact, tells us that three out of every five children suffer dental cavities. In other words, 60% of kids have them. If Signal owns 50% of the market share, this means Signal hasn’t stopped kids who use this toothpaste from getting cavities. So, Signal has lied. They’ve hoodwinked the consumers of this country for decades.

There’s another very disturbing fact. We don’t know if the Dental Surgeon’s Association has endorsed Signal for monetary benefit rather than the endorsement being a result of scientific investigation.

Signal is marketed as a Fluoride toothpaste. Our dentists tell us ‘go brush with a toothpaste that has Fluoride!’ Maybe that’s what they’ve been taught in the Dental Faculty. Maybe this is all that there is in the syllabus.   Not Sri Lanka is a country where there is no fluoride scarcity. Is all this hidden to serve the interests of a multinational, one wonders.

The sum total of human knowledge is ever expanding, but it looks like we are being forced to remain as the proverbial frog in the well. For whose benefit, though? The fluoride story reveals a lot.   Among the most important achievements of the 20th century is the fluorifiying of water. This was an effort launched in 1945. Even after 70 years, 90% of Americans of the United States are still suffering from multiple oral problems.   The world outside Sri Lanka has now realized that Fluoride is not a silver bullet that counters dental decay.

The U.S. Public Health Service published a non-enforceable standard for lead in 1925, consisting of a tolerance limit of 0.1 mg/L. The permissible exposure limit was reset in 1988 — 50 µg/m3. This was further reduced to 15 in 1991. A similar trend is evident in the cases of arsenic and fluoride with the limits for the latter being brought down by 40% between 1962 and 2014. The limits for lead and arsenic are fast approaching zero and this could soon be the case for fluoride as well.

The US Environmental Protection Agency has determined that fluoride is a neurotoxin that can damage the brain. Dr. Kathleen Thiessen opines that current knowledge does not support the claim that fluoride is beneficial. Indeed, research indicates the opposite, she states, insisting that it is a neurotoxin that has an anti-thyroid effect, or produces hypothyroid effects in some individuals.   This is what science tells us.

And yet it is the multinationals that teach our health authorities and dental surgeons how to see the world. What benefits accrued them to tell people in the Northwestern Province that brushing teeth with fluoride ‘enriched’ Signal is important considering the brackish water in the area? Perhaps it is no accident that a former health minister was both a dentist and an accomplished wheeler-dealer?

Perhaps an investigation should be launched into what kind of benefits, tangible and otherwise, accrued to top officials in the Dental Surgeons’ Association courtesy Signal! What does the Consumer Affairs Authority have to say about all this? What do consumer rights groups have to say? Why are they silent? This too should be investigated.

Not too long ago there was a toothpaste brand named ‘Ruwan.’ Produced by an Ayurveda physician this was the first Ayurvedic toothpaste that came in a tube. Another multinational company which produced toothpaste, noting that ‘Ruwan’ was gaining popularity, simply purchased enough shares to control the company manufacturing the tubes and promptly suspending production! This is how multinational octopuses operate in this country.

Today the country is ruled by a duo that comprehensively defeated the world’s most ruthless terrorist outfit. They must focus their attention on defeating the multinational terrorists poisoning the citizenry in one way or another.

For now, however, let us protect our teeth from Signal!
(Gadfly)