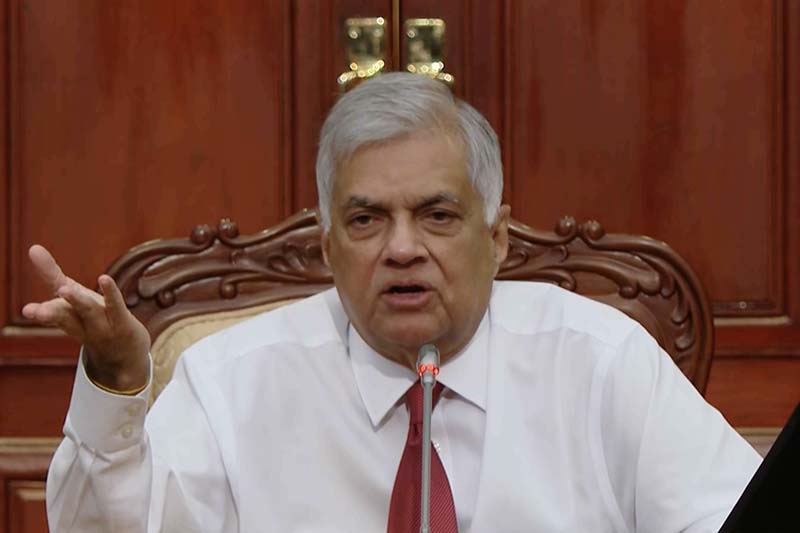 President Ranil Wickremesinghe says a referendum will decide on the parliamentary election system if a proposed select committee fails to reach consensus by July next year.

He said so during a meeting with a group of professionals at the Presidential Secretariat yesterday (09).

Desired changes to the political system should be brought about in accordance with the people’s aspirations, as a majority of them rejected the existing one, he said.

The statement made by the President during the discussion is as follows;

As we have discussed at length the measures to be taken to revive the economy, I would not intend to talk on it any longer here but we should focus our attention instead on the political program.

It was not the political parties that initiated the protests last March. The people did not participate in protests by the political parties but they came forward independently. Unfortunately, by May and June, different political organizations took this movement into their own hands and then the violence crept in. Along with the violence they attempted to oust the government and the struggle collapsed with it.

Still the people are of the view that the existing political system should be changed. Everybody rejects violence. And we have had to accept it and have to move forward changing these attitudes.

Different groups have been formed within the Parliament due to the party system. It is not a secret that I was supported by the ruling party to be elected as the President. A few voted with other contestants. Opposition members too voted in my favor. SJB as well as members of the Tamil parties too voted in my favor. Hence, I was supported by both sides.

I work for the people irrespective of narrow party lines. Currently, in accordance with the opposition’s request, a Parliamentary National Assembly has been established.

In addition, committees such as Monitoring Committees too have been established. But these have not yet been completed. Some participate in the National Assembly and some don’t. The country expects everyone to work together. We should not end here.

We should consider the people’s aspirations and should act accordingly. As the people are fed up with village level politics, we accept a new concept today. It is not the government but former Speaker Karu Jayasuriya who recommended the Jana Sabha System.

To unite the public organizations in that village level and working in one committee is what Janasabha is all about. This system which existed before as Gramodaya Mandala is commendable.

However, the Gramodaya Mandala had a connection with the government whereas the Janasabha has not. We hope to implement this public assembly program.

However, last time we increased the number of Pradeshiya Sabha members from 4000 to 8000. This was not what the people asked for. This was done following discussions between the party leaders. Now, we have to reduce this number back again to 4000 prior to the next election.

Therefore, let's work to amend those laws in the parliament. Let's start this program from there. And there is another urgent amendment. The Chairmen of these Pradeshiya Sabhas are the executive heads. Some people are against it. Before the Pradeshiya Sabha system, there was no such power when there were Municipal Councils and Village Councils (Gam Sabha).

Therefore, I propose to entrust the executive power of these Pradeshiya Sabhas toa chairman-based committee instead of a single chairman. The head of it would be the Pradeshiya Sabha Chairman.

Now there are finance committees. Let's create such an executive committee. We need to accomplish these two things before the next local government elections. I would like to specifically mention that it is something we must do. We have informed the ministers to prepare the necessary draft law. 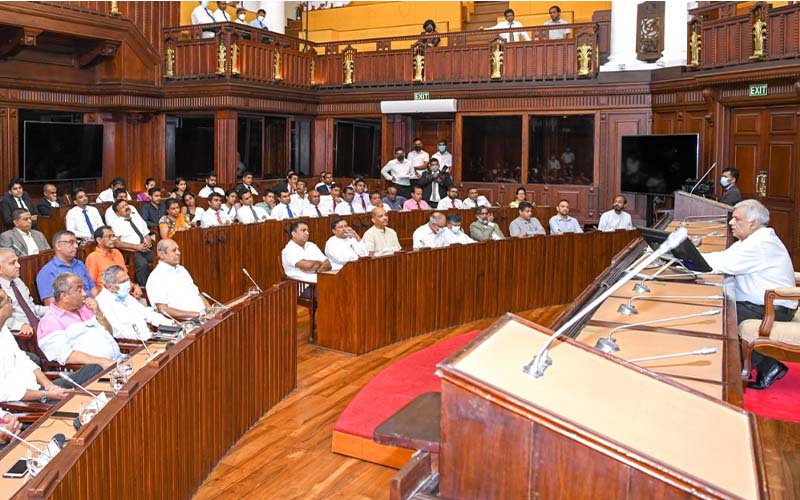 Similarly, many people are not in favour of this preferential system. No one thought of the preference system initially. Mr. JR Jayawardena, after much thought, proposed the list based electoral system in 1975, which was accepted by other parties as it was based on ratios.

However, in 1988 the parties in parliament suddenly took a decision to bring in the preferential system instead of the list system. Moreover, not just one preference, but three preferences. It was further decided to increase the number of members of parliament from 196 to 225.

The main reason for corruption in this country's politics is the preferential system. Hence, we need to prepare a new voting system. A decision should be taken to implement either the list method without preference, or the mixed method (single and proportional method).

Then, the suitable people would be elected. This is something that we have to do. Today there is no agreement among the parties. The main parties are told one thing and the minor parties are told another. We cannot progress in this manner. The political parties need to take a decision in this regard.

I discussed this matter with the Justice Minister as well. We will propose a parliamentary select committee to decide on the parliament voting system. That committee has to convene and discuss the matter.

This matter cannot be delayed because by July next year a decision should be taken. Failing which, I will opt for a referendum to seek public opinion on which electoral system is preferred.

People will be informed about this and discussions will be held about these methods. They can then discuss and choose one method. Therefore, the Parliament Select Committee should finish the activities entrusted to them. If not, I will leave it in the hands of the people to do the work. We can't escape from these responsibilities. We must move on.

A lot of money is spent on elections today. I voted the old way back in 1977, spending was limited back then. Today, some people spend 20-30, 50 million per election. How do we repay these? Members of Parliament have been imprisoned by this method.

Another factor is that there is no youth representation in our political parties today. Many work with the same old people just for namesake. There are no new organizations.

Therefore, a separate law should be presented regarding the constitution of political parties, their work, how to recruit members, how to select central committees, and how to select candidates.

Currently, countries like Germany have laws called the Political Party Law. We should also act accordingly. There are rules about how to collect money, what are the cases where money cannot be collected. Then you can work transparently. Anyone can go to court against it.

Because there is transparency, and because election expenses are limited, the parliaments of those countries give money to political parties. Money is also given for elections.

It is better to give from Parliament and not from private institutions. They have imposed restrictions. Even America has this system. Therefore, we should also bring in this system. I intend to appoint a separate commission to present their proposals in this regard. All this needs to be done next year.

Code of conduct for MPs

With a new economy, there must be a new attitude. Also, some people lay blame that action is not taken against MPs. Action can be taken against MPs if they have flouted disciplinary laws. I will present to Parliament the code of conduct and values of the MPs, similar to that in the British Parliament.

Parliament needs to approve it. In England, there is a Parliamentary Standard Act, if it is not acted upon, it will be reported. When they report it, they have to leave because of popular opinion. No other step can be taken. Recently, one MP was removed from the debate.

If we bring all these rules and regulations, if we make these amendments, we can win the people's trust. Then many people will go and vote in the next election. We can expect around 85% voter turnout.

We need to change attitudes. There is no point in going on protest marches in the old-fashioned way. Now what is happening is that political parties have started leaning on the protest struggles to get public support.

But, these protest struggles are not dependent on political parties. We have to bring rules and regulations according to the opinions of the people and give them the opportunity to appoint people who they want elected to parliament. This is the work that we should do in the future.