Sri Lankans living in countries across the world have been barred from attending Independence Day celebrations at all Sri Lankan embassies and high commissions abroad, 'Lanka Leader' learns.

While many Sri Lankan expats had campaigned heavily and even travelled to Sri Lanka to vote for President Gotabaya Rajapaksa, the same government has now instructed all Missions to hold celebrations without the attendance of guests due to financial constraints.

Accordingly, permission has been granted by the Foreign Ministry to conduct the Independence Day activities "at low key, limiting to the Mission premises, with the participation of the Mission staff."

Foreign Ministry sources said that Foreign Minister G.L. Peiris had also informed the diplomatic missions to refrain from inviting guests for events due to attempts to cut costs.

Hundreds of Sri Lankans abroad commonly gather at Sri Lankan embassies and high commissions around the world to mark the country’s Independence Day while foreign Missions, especially in the Middle East, often receive the most number of guests on the day.

The decision has irked many Sri Lankan living abroad. Slamming the announcement, some have gone on to question the expenditure relating to Foreign Minister's visits to Dubai and Korea in January at a time where Sri Lanka’s foreign exchange reserves have taken a significant hit.

One Country, One Law but not for Gota’s friends!

Meanwhile, in another communique sent out on January 12, foreign secretary Colombage had also informed Heads of Mission that a decision has been taken to temporarily suspend the reimbursement of the representational allowance given to diplomatic missions.

The representational allowance granted to Missions are used for important purposes such as strengthening ties with the authorities of each country, promoting Sri Lanka's tourism, trade, political, economic and security ties, and presenting official gifts at diplomatic meetings. 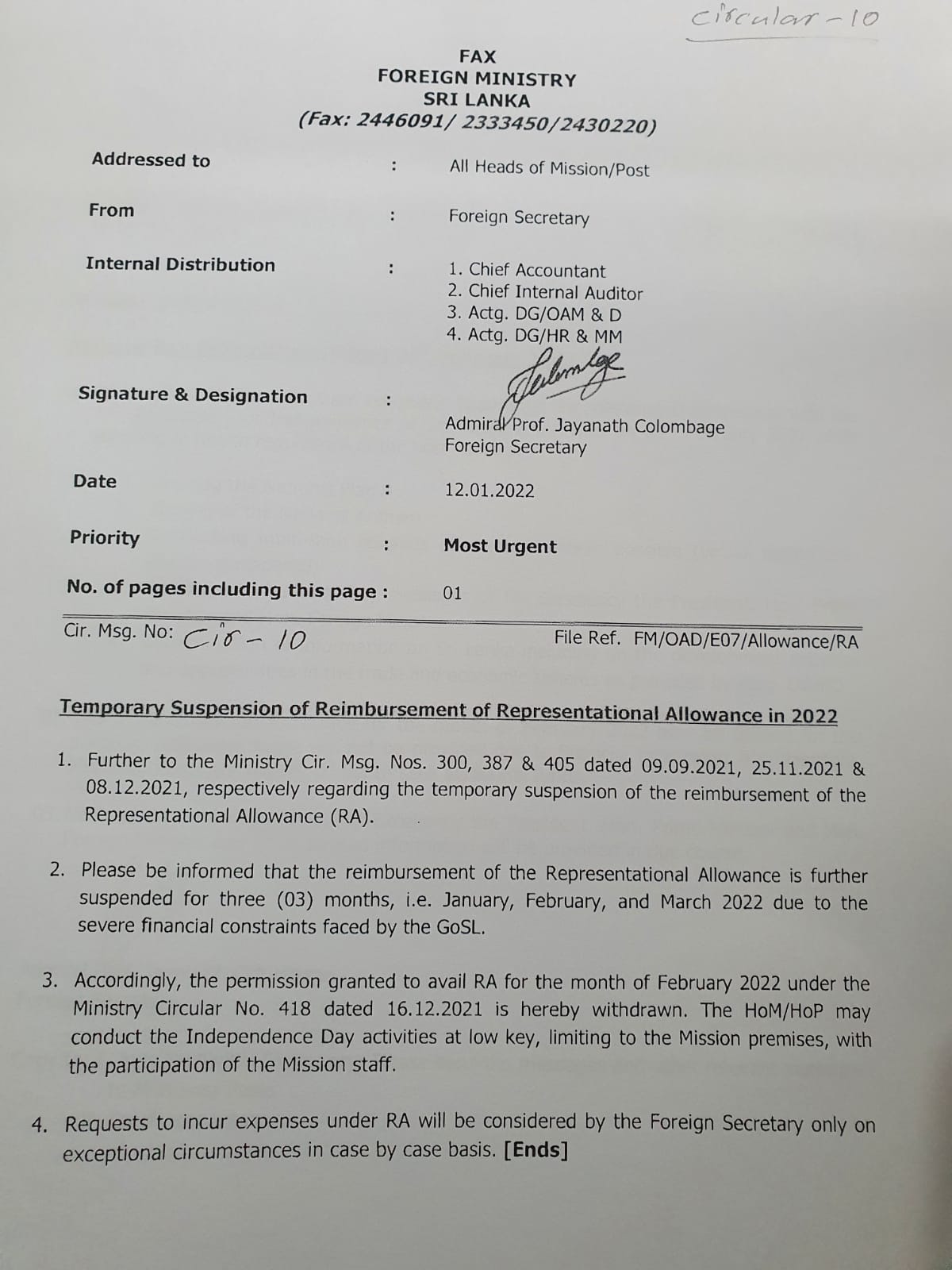 Sources at the Foreign Ministry pointed out that while all related expenses are audited, these expenses incurred by the Missions are only reimbursed after the presentation of bills to the Foreign Ministry. They also said the same set amount has been dispensed to all Sri Lankan Missions since 2001.

“For example, the maximum representational allowance granted for the Mission in Seoul, South Korea, one of the most expensive cities, is USD 700 per month but it isn't sufficient to cover expenses for a week," sources added.

However, Lanka Leader learns a select few have been able to avail themselves of this special privilege. The lucky individuals comprise a coterie of Gotabaya Rajapaksa's close associates and non-career diplomats such as Sri Lanka's Ambassador to Japan Sanjiv Gunasekara, High Commissioner to India Milinda Moragoda, Ambassador to the United Arab Emirates Malraj de Silva, Ambassador to Germany Manori Unambuwe, Permanent Representative of Sri Lanka to the United Nations Mohan Peiris, Ambassador to the U.S. Mahinda Samarasinghe and Consul General to Sydney Lakshman Hulugalle.

Foreign service officers speaking on the condition of anonymity said that despite the Foreign Ministry’s alleged cost cutting measures and suspension of allowances for career diplomats due to 'severe financial constraints', these individuals have been given free reign to spend valuable foreign exchange as they seem fit with no questions asked. 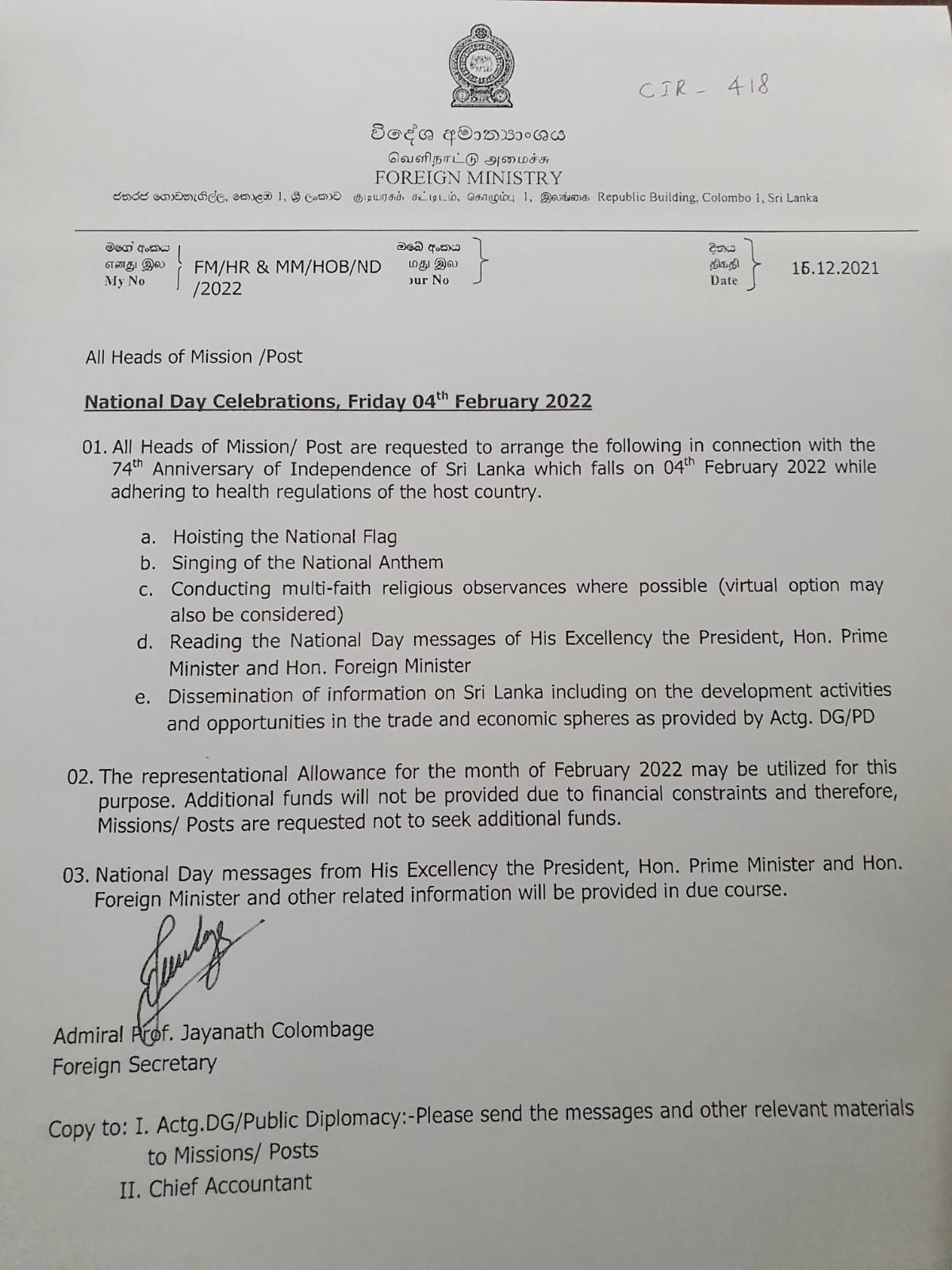