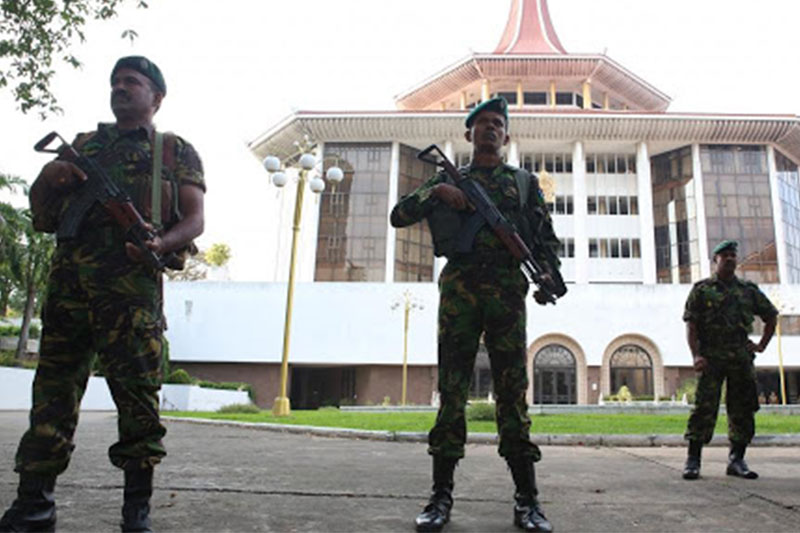 It is clear that the sentence imposed on Ranjan Ramanayake, Member of Parliament, by the Supreme Court and its magnitude has generated a great public sympathy on Ranjan
and protest on the judiciary. The apparent absurd nature of certain proceedings of the judiciary over a long period also seems to have become another important factor influencing the public protest.

The State of Sri Lanka, which was in a condition of degeneration caused by the persistent neglect of essential reforms, is collapsing before our eyes. The judiciary can be said to have   become the new victim of this historic process.

Of the three major power centers in a democratic State, usually it is the judiciary which is generally considered to be the one that is the most conservative and not easily prone for reforms.
But the judiciary in Sri Lanka, at one stage was determined to reform itself. The names of President Chandrika Kumaratunga, Prime Minister Ranil Wickremesinghe, Anura Kumara Dissanayake and Champika Ranawaka should go down in history as the political leaders who have obstructed and reversed this progressive trend.
It was only afterwards that the Rajapaksas made use of this situation to their advantage.

This incident can be considered as an important historical fact relevant to the judiciary in Sri Lanka which has not received the attention it deserves, of anyone before. Under the circumstances, it is important that we explain at least briefly, how this historic event has evolved for two reasons; one is that it is an essential condition for understanding the crisis facing the judiciary in Sri Lanka and the path to be chosen to overcome it; the other is my direct involvement in revealing this incident. It was I who initiated the process and followed it up.

On August 17, 1997, the Ravaya, for the first time, carried headline news on an incident in which a magistrate attached to the judiciary had taken a young woman to Gampola Rest House and abused her sexually. The woman happened to be the wife of a respondent, who was in remand custody regarding a case being heard by the said Magistrate.
Responding to the news published in the Ravaya, the Magistrate, on the advice of the Attorney General (Sarath Silva), lodged a complaint against me with the CID.

On 21st August, a group of 9 Buddhist monks conducted a prayer at the Aiyanayaka Devalaya at Deduru Oya invoking the blessings of the God Aiyanayaka on the Magistrate and curse on me; and it was reported in the Divaina newspaper as a leading news item. In a press release issued by the group of monks, the magistrate had been introduced as a man of the age bequeathed to the people of the North Western Province by the Judicial Service Commission.

I was able to find out that Lenin Ratnayake had worked as a clerk in the Insurance Corporation prior to joining the judiciary and been dismissed from the service on account of a fraud involved in a number of third party insurance claims. I reported this revelation in the Ravaya newspaper on August 24.

One day in the first week of October, Police Investigator Vaidyasekera came to my office and took a statement from me in regard to the criminal investigation initiated under the complaint made by Magistrate Lenin Ratnayake against me.
I raised a serious question as to how a person dismissed from service by the Insurance Corporation on a financial fraud has joined the judiciary and handed over the copies of two documents in support of the allegation to the Inspector of Police. Further, I furnished him the information about the woman who was sexually abused by the Magistrate.

The police investigator had already obtained a statement from the woman concerned and also had probed into the truth of the insurance story as well. Based on these findings it was not possible to conduct a criminal investigation against me except for initiating legal action against the Magistrate. The Inspector of Police had requested the necessary instructions from the Attorney General for that. That is where the great conflict between me and the Attorney General that eventually led to shake the judiciary, begins.

If the Attorney General had been a person with a sense of the law and the esteem of the judiciary, the facts revealed in that inquiry report about the Magistrate should have shocked him. He should have been exasperated by the fact that a person kicked out of a State institution on a financial fraud had joined the judiciary by hiding the facts about his previous employment. The incident in which the Magistrate had taken a female respondent of a case heard by him, to a rest house and abusing her should have angered him.

But the revelations of this investigation have not caused any shock in the Attorney General. It is possible that he was related to this Magistrate and also there may have been an interrelationship between the two, on the subject of women.

With that, I probed into the conduct of the Attorney General. A number of interesting episodes came to light as a result thereof. One of the most important findings is as follows.
It was found that the Attorney General Sarath Silva was leading an immoral life with a paramour in his house while his legal wife who has not been divorced was also residing there. The paramour happened to be the wife of a chemical engineer whom he associated closely. The engineer filed a divorce case against his wife, making Sarath Silva also a respondent.
At that time, Sarath Silva was working in the Court of Appeal. The case was heard by the District Judge Upali Abeyratne and the manner in which he had acted to safeguard the interests of Sarath Silva was not only illegal but also oppressive and insulting.
The Chemical Engineer made a complaint to the Judicial Service Commission and it conducted an inquiry and found the judge Upali Abeyratne guilty and removed him from judicial service and directed the Attorney General with the report of the inquiry to take legal action against him for illegal and arbitrary policy he had adopted in this case.
The inquiry was conducted by two Supreme Court Judges, Tissa Bandaranaike and Dr. Mark Fernando. Subsequently, things took a different turn with Sarath Silva being appointed the Attorney General who swept the report under the carpet and pursued a strict policy of protecting District Judge Upali Abeyratne.

In view of these developments, I turned my voicing into a great clamor against District Judge Upali Abeyratne and Attorney General Sarath Silva without limiting it to Lenin Ratnayake only.

In this instance, it is commendable that the Bar Association did not take a stand against me in favor of the two judges and the Attorney General. Instead, a meeting of former presidents of the Bar Association was convened and called for an inquiry to take up the allegations made against me for argument and investigate them.
They reached a decision that the allegations I have made against the two judges shall be probed into and recommended that if they were found untrue, a strict policy should be adopted against me; and in case the allegations against the two judges were substantiated, then only the allegations against the Attorney General Sarath Silva must be investigated. In that instance, it is obvious that the Bar Association has adopted a reasonable and straightforward policy.
Accordingly, the Judicial Service Commission appointed two three-member inquiry panels consisting of the Judges of the Court of Appeal. Upali Abeyratne pleaded guilty for the charges leveled against him.
Although Lenin Ratnayake did not plead guilty at the inquiry, he was found guilty of all four charges by the panel of inquiry.
It is important to note that the judges who were in charge of the two inquiry panels did not follow a policy of defending the two respondents, treating them   as members of their own clan. Nor did they follow a policy of persecuting me either, treating me as an outsider.

After the two judges were found guilty by two independent panels of judges, both of us (myself and the chemical engineer) filed two complaints against Attorney General Sarath Silva on corruption charges.
The Chief Justice had consulted the judges of the Supreme Court as to whether an inquiry into our complaints could be initiated against the Attorney General, and only three judges had objected to it. Thereafter, the Chief Justice appointed two judges to investigate the two complaints.
By this time, President Chandrika was in a great crisis. She used to perceive the Supreme Court as an institution working against her. Her focus was primarily on the next presidential election and the ensuing lawsuits likely to be faced in connection with the election.
In the absence of a two-thirds majority in parliament she must have felt that it would be necessary to appoint a Chief Justice who would act loyally to her so that she could control the Supreme Court to her advantage.
Sarath Silva was the one who had won the confidence of the President. Yet, he was in a serious predicament and on the verge of being trapped. She made Sarath Silva, the Chief Justice, filling the vacancy created by the retirement of the incumbent CJ, ignoring the fact that the former has been indicted by the Supreme Court. This reversed the major reforms program that the judiciary had been moving towards.
Prime Minister Ranil Wickremesinghe had the ability to correct the grave mistake committed by President Chandrika to the judiciary. The president of the International Bar Association (Lord Brennan) met with Prime Minister Ranil Wickremesinghe and remarked that keeping this chief justice in the office might act as a cancer, destroying the quality of the judiciary.
The arrogant reply of the Prime Minister has been that it was not a matter in the list of priorities of his government.
The JVP and Champika Ranawaka's Jathika Hela Urumaya (JHU) which has now become the 43rd Division, can be considered as the other two forces that had defended the survival of this contemptible Chief Justice who has ruined the judiciary of Sri Lanka.
The Chief Justice received the blessings of both parties- JVP and the JHU by passing judgments in their favor thereby helping them safeguard their reputation on occasions when each of them sought his support separately.

If it was not for these parties, Marak Fernando would have become the Chief Justice of the country. Had it been so, the country would have got a better and strong judiciary and even made a remarkable change in the degeneration of the State as well.