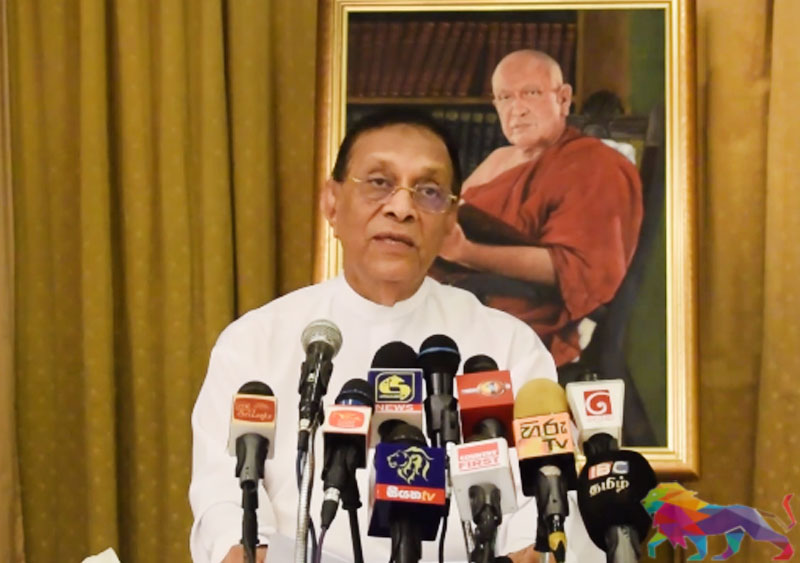 Former Speaker Karu Jayasuriya stated that the parliament has been reduced to a level of a post office after the passage of the 20th Amendment.

Noting that many dictators, autocrats, monarchists and fascists, have from time to time, tried to assert their power by suppressing anti-parliamentary traditions, the former Speaker said that all such attempts throughout history have been defeated through the will and sacrifices made by the public.

He pointed out that the most serious blow and insult to parliament in recent times has been the attempt by external forces to shutdown the Public Utilities Commission, which was created by an Act in parliament.
"Attempts are being made by the Secretary to the Treasury to abolish it on the instructions of the Secretary to the President. They are also urging the Hon. Members of the Commission to resign. Such attempts are not only arbitrary and anti-democratic, but also an undue interference of the executive on the legislature," he said.
The full statement issued by former Speaker Karu Jayasuriya is found below.
"The National Movement for a Just Society pays attention to the socio-political, cultural and economic issues of this country as we have a national responsibility to focus on such issues.

As an organisation, we have no political ambitions to seek power. Therefore, the National Movement for a Just Society will always stand to protect democracy and the rights of the people in this country.

It is with that responsibility in mind that we present these facts to you today.

In modern advanced democracies, the people are represented through the parliament. The parliamentary system is not built on the hegemony of a dictatorship.

Many dictators, autocrats, monarchists and fascists, have from time to time, tried to assert their power by suppressing anti-parliamentary traditions. All such attempts throughout history have been defeated through the will and sacrifices made by the public. We still have to bear that responsibility.

The Parliament of Sri Lanka symbolizes the sovereignty of the people and the democratic nature of the state. Our parliament has a distinguished history. Our parliamentary system has earned the respect and admiration of the world, for producing eminent politicians who have championed the traditions of democratic governance.

But what is the status of the current parliament? As we have pointed out previously, the parliament has been reduced to a level of a post office after the passage of the 20th Amendment.

The intellectuals of this country, including the Maha Sangha and other religious leaders, have warned that with the passage of the 20th Amendment, democracy in this country would be destroyed and the legislative supremacy of parliament would be damaged.

We also warned that the transfer of the freedoms and rights of 21 million people to one individual could create fear and misery in the country. That is the present situation today.

The most serious blow and insult to parliament in recent times has been the attempt by external forces to shutdown the Public Utilities Commission, which was created with the blessings of the parliament.

If the government wanted to amend the Act which established the Public Utilities Commission, the changes should have been made in parliament with the approval of the cabinet.

But what is happening today? As a former Speaker, I am deeply concerned by these incidents.

This is also shameful. The behavior of certain senior government officials in this country is appalling and sullies the reputation of the parliament.

All Hon. Members of Parliament across the political spectrum must pay attention to this. We also believe that the Hon. Speaker should clarify his stance regarding this.

The Public Utilities Commission was created by an Act of Parliament. The bill was brought for the benefit of the people. The PUCSL will protect the consumer against abrupt and unfair price increases. It will also prevent huge losses to the government with regard to the purchase of electricity at exorbitant prices.

This institution has done its duty for the last 19 years. Eminent professionals were appointed as members of this commission. The members who had submitted their resignations recently were part of a distinguished team. So what are the reasons for destroying such an effective institution? People are likely to assume that this was done with bad intentions.

It was reported that the executive hopes to make new appointments to replace the members who have resigned. If such a process is carried out, the people of the country as well as the National Movement for a Just Society would strongly oppose these efforts. This is clearly an attempt to deceive the public. Similar to the appointments made recently to commissions, they will appoint their own political allies.

The Parliamentary Council recently appointed members to various independent institutions. It is a well known fact that among them were individuals who have engaged in politics on behalf of the incumbent government. Government officials should understand that the public strongly opposes such appointments.

People are starting to question whether these members appointed by the Parliamentary Council in a highly partisan manner can actually function with independence?

We also recall how two Hon. Members of Parliament resigned when the 18th Amendment paved the way for such arbitrary appointments. Public perception, including our organisation, is that there should be no changes made to the existing Public Utilities Commission and its former members. I would like to bring this matter to the attention of the Hon. Members of Parliament. The public hopes that they will act boldly according to their conscience.

We hope that the government is aware of the fact that the public is mindful of the current state of affairs.  We urge the authorities not to insult the intelligence of the people.

We are an independent institution. We call for the protection of the democratic rights that were affirmed by the 19th Amendment but were destroyed by the 20th Amendment. Despite many obstacles, we will carry out this programme that was initiated by the Ven. Sobitha Thero with the most noble intentions. However, it seems that we do not have the support of the mainstream media in this country.

The intellectuals, especially the members of the Maha Sangha in this country, inquire from us about this. When we ask about it, journalists tell us that they cannot be held accountable for the decisions that are made by people above them. However, as the National Movement for a Just Society, we are committed to fulfilling our responsibility on behalf of our country."
Related News:
People won't spare the Govt. for its arbitrary decisions; scrapping PUCSL is illegal - Karu
Even with unprecedented powers, Govt. unable to fulfil people's needs: Karu
Karu reveals how Buddhist prelates who opposed 20A were silenced
Procurement Commission a must to stop large scale tender irregularities - Karu