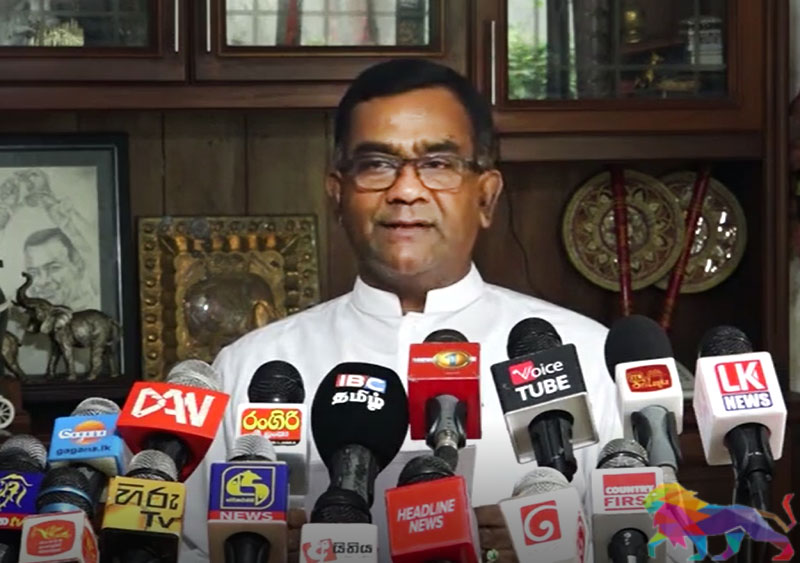 The Opposition has accused the government of cracking down on media outlets that have been critical of the current administration despite the right to freedom expression
which has been guaranteed by the Sri Lankan constitution.

SJB MP Tissa Attanayake said that he regretted the government's use of the law to suppress the freedom of expression.

At a media briefing in Colombo on Tuesday (24), Attanayake said that the government was on the lookout for some 200 social media activists who have been critical of the Rajapaksa administration.

The best example of the government's attempt to suppress media freedom is the manner in which the Criminal Investigation Department (CID) has cracked down on a Sinhala nationalist monk who played an instrumental role in bringing this government to power.

A group of officers from the CID had visited the General Secretary of the Sinhale organization, Ven. Madille Pannaloka Thera at his temple, to question him regarding several frauds allegedly committed by Minister Johnston Fernando which was revealed at a press briefing recently.

Unlike the previous administration: 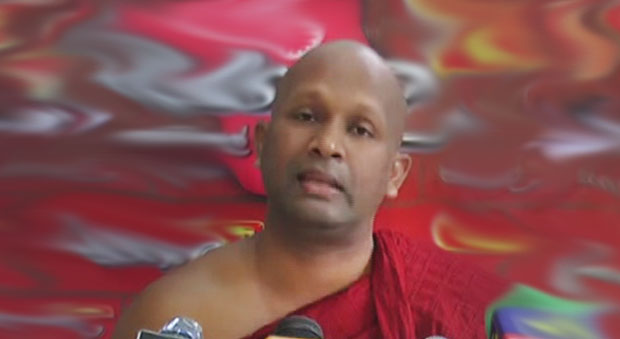 Ven. Madille Pannaloka thera had emphasised that despite the relentless criticism aimed at the previous administration, it had never resorted to acts of suppression.

"I sparred with the good governance government many times. Not once had the CID visited the temple. When the frauds of the ministers and their cronies were exposed, the OICs' of the CID were sent to the temple. This is the vision of prosperity..." Ven Pannaloka said in a Facebook post.

At a time when the people of this country are struggling to make ends meet on a daily basis with an acute shortage of food due to the COVID-19 pandemic, the SLPP-led government has returned the license for Wayamba Distilleries which Highways Minister Johnston Fernando is a stakeholder of, along with a tax relief.

The Excise Department had banned Wayamba Distilleries from manufacturing spirits in 2015 for failing pay taxes amounting to hundreds of millions of rupees, the Ven. Thera disclosed, adding that the Minister managed to recommence its operations by using his political power in the government from November 16, 2020.

Regulation of websites:
Minister of Mass Media Keheliya Rambukwella told the Ministerial Consultative Committee on Mass Media on Saturday (21) that a proper mechanism to regulate websites would be introduced within the next two weeks.

Education Minister Prof. G.L Peiris said that a new law has been passed in Singapore to control such matters and having studied such laws, the formulation of a new mechanism should be made.

However, media rights activists have expressed concern over the proposed Singapore-style regulatory framework known as The Protection from Online Falsehoods and Manipulation Act (POFMA), which would seriously obstruct the right to freedom of expression in Sri Lanka.
Meanwhile, Sanjana Hattotuwa, a global thought leader in the conceptualisation and applications of ICT for peacebuilding tweeted that "POFMA, passed in May 19... is framed as a disaster for freedom of expression... has major implications for privacy & forces SM companies to do things counter to democratic values." 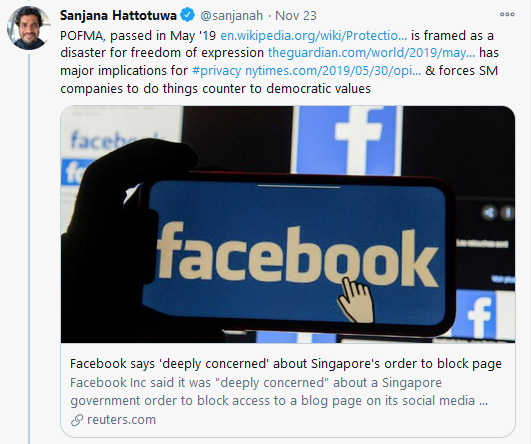 SLPP General Secretary Sagara Kariyawasam said at a recent media briefing that discussions are underway about regulating social media although no decision has been taken in this regard.

He noted that several unregistered websites were disseminating false information and were engaged in slandering certain people.
Therefore, the government was of the view that such defamation is unjust and action should be taken against those websites, adding that these measures will be implemented to protect the privacy of all citizens and not to benefit the government.