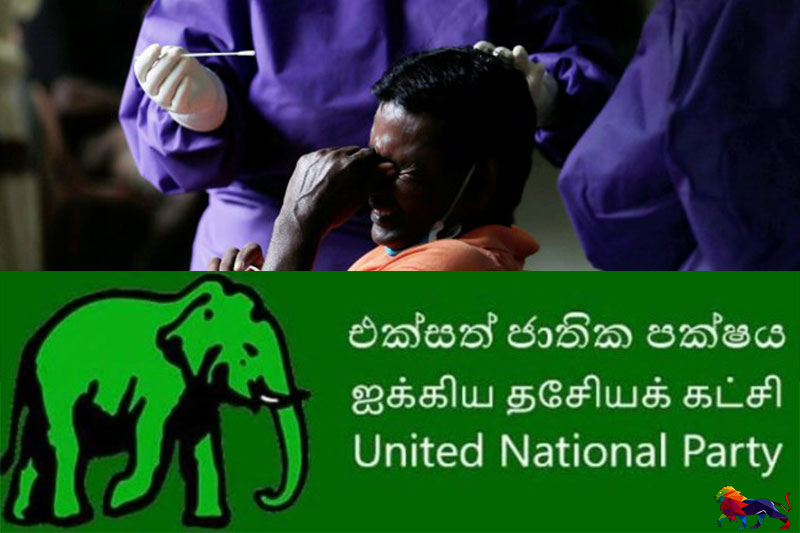 (WHO) and urged the government to accord full priority to the ongoing outbreak in order to ensure the health and safety of all citizens.

In a statement by the UNP media unit yesterday (30), the party expressed grave concern over the government’s delayed response to combating the latest outbreak of COVID-19 in the island.

“Despite repeated warnings of a pending second wave from the World Health Organisation, the government chose to propagate the idea that they had defeated the virus, without taking adequate steps to protect the citizens of the country from a resurgence," the UNP said.

The party noted that the government failed to enact relevant legislation which would have benefited the ANTI-COVID efforts.
"The lack of proper laws has resulted in the breakdown of the prevention methods as was seen (Thursday evening) when the citizens of Colombo left the city in large numbers ahead of the pending lock-down," the statement said, adding that the inability of the government to curb the movement of people from the Western province has now endangered the residents in the other provinces in the country.

The statement further said that in April this year, UNP Leader Ranil Wickremesinghe and TNA MP M.A. Sumanthiran, had drafted a Public Health Emergency Bill which was presented to the government. "It has failed to act on this legislation, which has rendered them ineffective,” the statement said.

The UNP noted that the recent breakdown of a PCR testing machine will severely impact the government’s efforts to control the spread of the virus.

“Currently it takes more than five days for the government PCR tests to come up with the results and this delay has an impact on both the health and safety of the public as well as the economic activities of the country. The unavailability of a testing machine will only serve to further delay the results of the PCR tests being conducted in the country," the statement said.

The UNP observed that it is the responsibility of the government to have ensured that adequate testing facilities were installed around the country to prevent delays.
"There is also a concern regarding a pending shortage of hospital beds and ventilators. The government must make all efforts to increase the capacity at hospitals to accommodate patients from this second wave," the statement added.