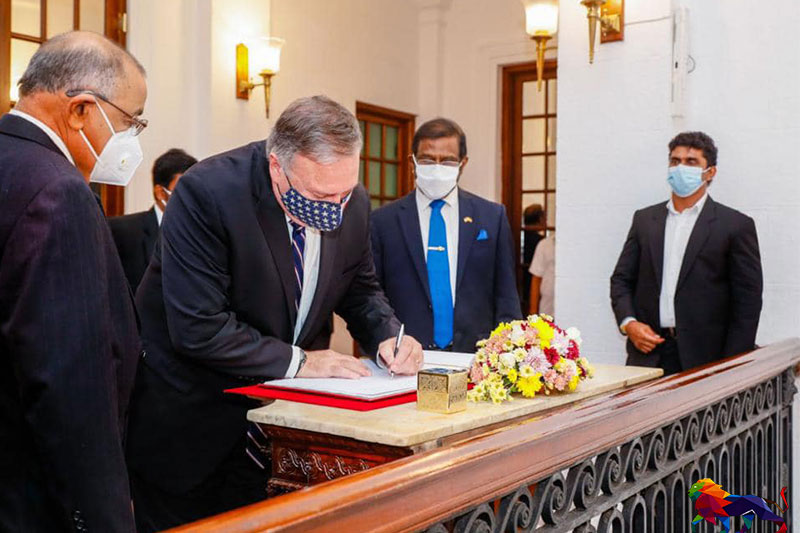 US Secretary of State Mike Pompeo said on Wednesday that the Chinese Communist Party has brought “bad deals” to Sri Lanka and termed it as a 'predator'.
"We see from bad deals, violations of sovereignty and lawlessness on land and sea that the Chinese Communist Party is a predator, and the United States comes in a different way, we come as a friend, and as a partner,” Secretary Pompeo said at a joint press conference after concluding talks with Foreign Minister Dinesh Gunawardena.

Further speaking, the US Secretary of State stated that they fully expect Sri Lanka to fulfill its pledges to take meaningful, concrete steps to promote accountability, justice, and reconciliation.

The US wants to take the bilateral partnership with Sri Lanka forward based on democratic values, he said, adding that his country wants the people of Sri Lanka to have sovereignty and independence.

“The United States seeks to strengthen our partnership with democratic peaceful prosperous and fully sovereign Sri Lanka. We had a wide-ranging discussion on our security cooperation which helps keep some of the world’s most vital sea lanes open,” he said.

"We want them to be successful, we want sustainable development for them. We think the US as a friend and partner offers exactly that,” Pompeo noted.

Great American companies such as Coca Cola and IBM are here in Sri Lanka today, Pompeo stated adding that they are the ‘most reliable partners on the planet’.

"They are accountable to the law, transparent, and are assets to the communities in which they operate," he added.

“Good governance, transparency, policy consistency will attract even more American investments as those principles are deeply consistent with Sri Lanka’s history, its heritage as the oldest democracy in Asia," he observed adding that a strong sovereign Sri Lanka is a powerful and strategic partner for the United States on the world stage.