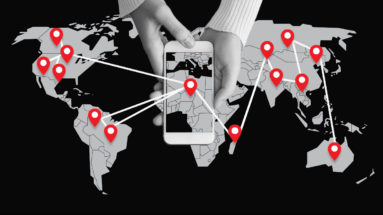 Some governments, including Sri Lanka, are introducing digital surveillance and data collection tools  in their fight against the COVID-19 pandemic that could pose a lasting
threat to citizens' rights, a new report by research institute Freedom House revealed.
The Freedom on the Net 2020 report, an assessment of 65 countries released Wednesday (14), found that the pandemic has accelerated a decline in free speech and privacy on the internet for the tenth consecutive year, and accused some governments of using the virus as a pretext to crack down on critical speech.

"In the COVID-19 era, connectivity is not a convenience, but a necessity. Virtually all human activities—commerce, education, health care, politics, socializing—seem to have moved online. But the digital world presents distinct challenges for human rights and democratic governance. State and nonstate actors in many countries are now exploiting opportunities created by the pandemic to shape online narratives, censor critical speech, and build new technological systems of social control," the report said.

They pointed out three notable trends that punctuated an especially dismal year for internet freedom.

Second, authorities cited COVID-19 to justify expanded surveillance powers and the deployment of new technologies that were once seen as too intrusive. The public health crisis has created an opening for the digitization, collection, and analysis of people’s most intimate data without adequate protections against abuses.

The third trend has been the transformation of a slow-motion “splintering” of the internet into an all-out race toward “cyber sovereignty,” with each government imposing its own internet regulations in a manner that restricts the flow of information across national borders.

The allure of cyber sovereignty

Rather than protecting users, the application of national sovereignty to cyberspace has given authorities free rein to crack down on human rights while ignoring objections from local civil society and the international community.

China’s regime, a pioneer in this field and the world’s worst abuser of internet freedom for the sixth year in a row, has long blocked popular foreign services and centralized technical infrastructure to allow for the pervasive monitoring and filtering of all traffic coming into the country.

Following this model, Russian authorities have passed legislation to isolate the country from the international internet during national emergencies, and Iran’s government similarly cut off connections to hide the police’s violent response to mass protests in late 2019.

However, the reports also pointed out that these sorts of practices are not unique to the world’s most repressive regimes. Countries across the democratic spectrum are erecting their own digital borders in a sign of fraying trust in the open internet. The United States and India banned many popular Chinese apps, citing national security concerns.

Surveillance in the name of public health

Tracking the spread of the coronavirus is key to limiting further infections - a tactic that has been credited for South Korea's low number of Covid-19 deaths, for example. But without robust privacy protections, Freedom House warns that some technological responses to the pandemic could pave the way toward future surveillance states.

Countries like Sri Lanka, Pakistan and Nigeria have invoked the pandemic to tap into telecommunications data for mass surveillance with little oversight, Freedom House said adding that work is being carried out by or in tandem with national security and military agencies.

Smartphone apps for contact tracing, enforcing quarantines and monitoring someone's health status, have been introduced in at least 54 countries, with few privacy protections, according to the report.

Though contact tracing plays a vital role in containing the virus, some digital monitoring tools are being rolled out hastily and with little accountability for how personal data - like location, names and contact lists - might be matched with public information to dangerous effect. And that could prove to be a slippery slope, Freedom House warned.

"History has shown that technologies and laws adopted during a crisis tend to stick around," said Adrian Shahbaz, director for technology and democracy and a co-author of the report. "As with 9/11, we will look back on COVID-19 as a moment when governments gained new, intrusive powers to control their populations."
-With inputs from CNN and Freedom House