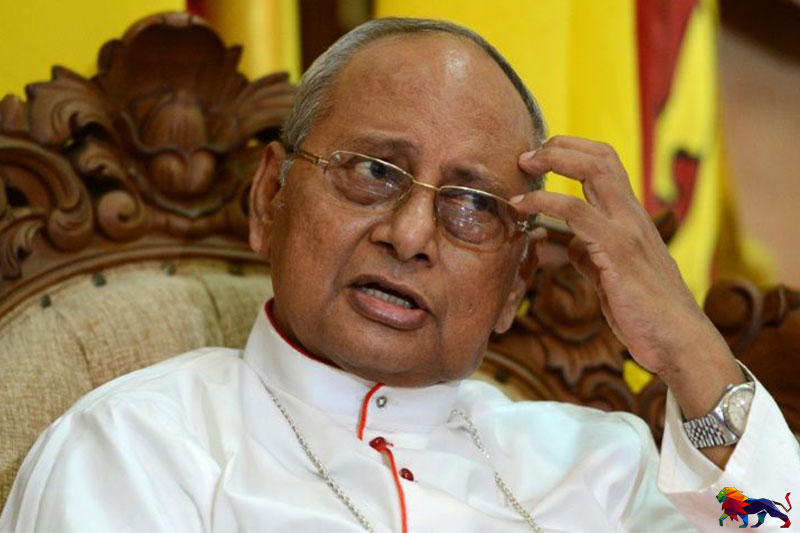 Cardinal Malcolm Ranjith, the Archbishop of Colombo, has gone out of his way by making a desperate call for banning religious and ethnic parties from the
local political arena, political analysts said.

Cardinal Malcom Ranjith made these observations while addressing a gathering of devotees who attended the National Day of the Sick in the basilica of Our Lady of Lanka in Tewatte recently.

Making statements of this nature is unbecoming for a religious leader like Cardinal Malcolm Ranjith as it spreads hatred while creating divisions among communities of different religious faiths, analysts said.
Mangala stands for minority parties
Highlighting the repercussions of this statement, former Finance Minister Mangala Samaraweera in a twitter message noted that, "banning ethno religious parties is an extremely dangerous proposal."
"All views and beliefs, however extreme, are best represented in Parliament," Samaraweera said.

He claimed that Cardinal Malcolm Ranjith is batting for Prime Minister Mahinda Rajapaksa yet again by preparing the groundwork to raise the cut off point of the percentage of votes polled in elections depriving minority parties of its representations in parliament.

Currently, 196 members are elected in multi-seat constituencies through the proportional representation system where each party is allocated a number of seats from the quota for each district according to the proportion of the total vote that party obtains in the district.

The minority parties representing different religious faiths are still relevant and they are capable of addressing the issues faced by the minorities, political analysts noted.

Therefore, calling for the ban of such parties would be only beneficial for major parties like the ruling party, they pointed out.

By forming alliances, major political parties have become captives of smaller religious/ethnic parties, and these major parties are forced to cater to the demands of the smaller groups.

Cardinal Malcolm Ranjith’s call for banning ethno religious parties will help to  take away any leverage the smaller parties have over the larger parties which would allow the Rajapaksa regime to rule the country without listening to their voice, they added.