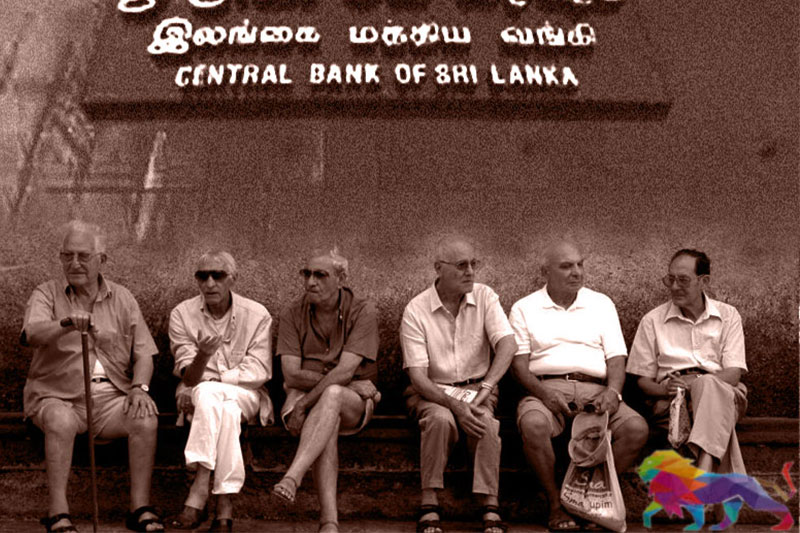 Prior to the current government coming into power, every other government that existed ensured that Sri Lanka’s fixed deposit interest rate was maintained at not less than 8%.

But the current government, in a supposed bid to revive the economy, has brought down last month’s loan interest rate to a single digit. This policy is being implemented with the involvement of the Central Bank of Sri Lanka, the Ministry of Finance and the Presidential Secretariat.

Sri Lanka’s financial market, especially Commercial Banks, have commenced credit marketing by providing attractive interest rates starting from 4% to 7.5% while some commercial loans are being given for 11%.

No government has been able to bring down the loan interest rates below 10%. But now, Sri Lankan businessmen, industrialists and exporters are borrowing at a single digit interest rate.

However, the intellectuals who have set these interest rates have disregarded the three million depositors and their seven million dependants.

As Minister Bandula Gunawardene would say, market interest rates should be determined by financial demand and supply. It should not be forgotten that the country's inflation rate also plays a major role in determining interest rates. But this theory is not being implemented.

How the interest rate was decided...

As mentioned earlier, the interest rate in Sri Lanka is determined by the demand for credit, the excess of deposits and inflation. It also sets interest rates with the aim of raising Sri Lanka's savings rate, which has been a public policy for nearly 50 years.

Fixed deposits and savings in banks are made by the general public. As a result of these policies, Sri Lanka's savings have increased from 18% to 26% over the past 30 years.  Even in countries with high savings rates, such as Japan, the figure is 28%.

After the loan interest rate was set between 4% and 11%, the bankers immediately brought down the deposit rate to 5%.

Deposits taken from you for 5% can now be lent to investors at 10% - 11% which is making both the government and investors happy.

But in this interest rate adjustment process, the government has not taken into account the country's inflation (the percentage increase in the price of goods and services in a year).

People who often save their provident fund after working for nearly 40 years, or save up while working abroad, or others who sell part of their land to live out their retirement, deposit the money as a fixed deposit to live off its interest annually.

Members of the security forces, in particular, retire in 15 to 20 years and invest their bonuses in a fixed deposit. But the annual interest rate, which was 10%, 9% or 8% up to last month, has now dropped to 5%.

The interest rate on savings accounts has dropped to 3%. If inflation in Sri Lanka is taken to be 5.6%, there will be nothing left for a depositor who receives deposit interest in 2021. If inflation rises to 6%, another 1% must be found elsewhere.

Here are the long-term consequences of interest rate cuts:

1. Displacement of deposits from the formal financial markets and flow to the informal financial institutions.
2. Funds invested in treasury bill securities leaving Sri Lanka
3. Those retiring facing difficulties due to the low rates of the Employees Provident Fund (EPF) and the Employees Trust Fund (EPF)
4. Further inconvenience to citizens who lost their income and jobs due to the Corona disaster.

5. Extinction of the saving habit that has developed in Sri Lanka over the years.

Furthermore, the 15% interest payable subject to a maximum of Rs. 1.5 million introduced to senior citizens by the good governance government will also be reduced to 7.5% after the election.

Low interest loans should be made available to investors and business people. But the provision of refinancing facilities on state intervention should be made through funds obtained from foreign funds and innocent depositors should not be held hostage for this purpose.

Sri Lankans are not the only ones who have invested in the US$ 45 billion deposit market in Sri Lanka. Many foreigners have also made savings in the financial markets.

Last week, nearly US$ 475 million in foreign investment in treasury bills was withdrawn. These deposits will also flow out of the country upon maturity.

Rather than saving money, people may be tempted to buy goods, land, etc. thus triggering a further rise in inflation. People may also be interested in buying dollars and foreign exchange.

Finally, low interest loans should be made to investors but not out of depositors' accounts. Developed countries charge single-digit interest on advances because they have a surplus of money in the money market and inflation ranges from 0% to 3%. And because banks have large reserves and dividends, they do not have to pay depositors high interest rates to raise funds.

Simply put, the ratio between deposits / advances currently taken by commercial banks should be kept to a minimum. That is, the advance rate should be determined by adding 2%, 3% extra without adding 5%, 6% to the deposit received by the bank.

For this to take place, the efficiency of the banks must be improved.  Further, plans must be implemented to create an investment banking system in the country such as the National Development Bank and the Development Finance Corporation, as implemented by governments in the past.
Even in neighboring India, all financial institutions pay 7.50% interest on bank fixed deposits.