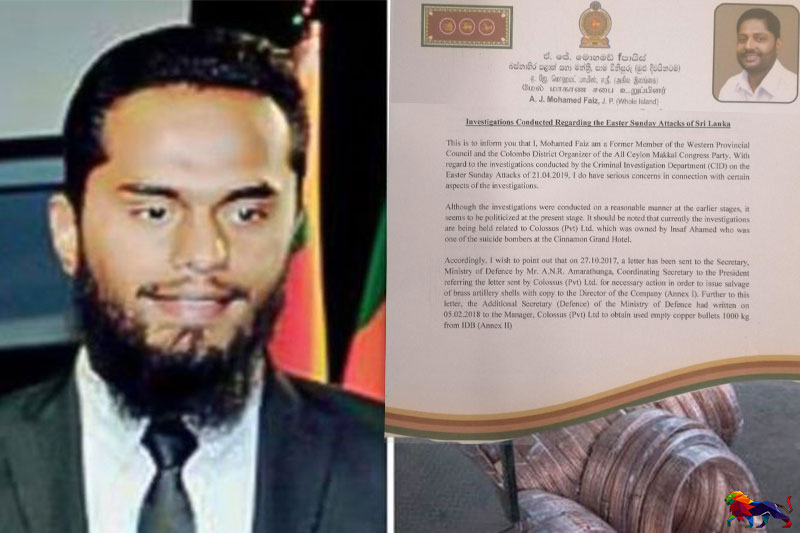 Serious concerns have been raised over whether Colossus (Pvt) Ltd., owned by Insaf Ahamed, the bomber responsible for carrying out the suicide attack on the Cinnamon

Grand Hotel on Easter Sunday, had received special patronage from officials at the Presidential Secretariat and the Ministry of Defense as well as several government agencies, including Sri Lanka Telecom.

Former Councillor of the Western Provincial Council and the Colombo District organizer of the All Ceylon McCullum Congress (ACMC), M.J.M. Faiz has written a letter to the DIG of the Criminal Investigation Department (CID), Nuwan Wedasinghe requesting him to inquire whether there were any direct or indirect links between government agencies, including SLT, which had given more importance to Colossus (Pvt) Ltd, and Insaf Ahmed, and whether the funds were used for terrorism.

M.J.M Faiz in his letter to DIG Wedasinghe observed that he has "serious concerns" with regard to the investigations conducted by the Criminal Investigation Department (CID) on the Easter Sunday attacks of 21.04.2019.

"Although the investigations were conducted in a reasonable manner at the earlier stages, it seems to be politicized at the present stage," he stated.

It should be noted that currently the investigations are being held related to Colossus (Pvt) Ltd. which was owned by Insaf Ahamed who was one of the suicide bombers at the Cinnamon Grand Hotel.

Accordingly, I wish to point out that on 27.10.2017, a letter has been sent to the Secretary, Ministry of Defence by Mr. A.N.R. Amarathunga, Coordinating Secretary to the President referring the letter sent by Colossus (Pvt) Ltd. for necessary action in order to issue salvage of brass artillery shells with copy to the Director of the Company (Annex I). 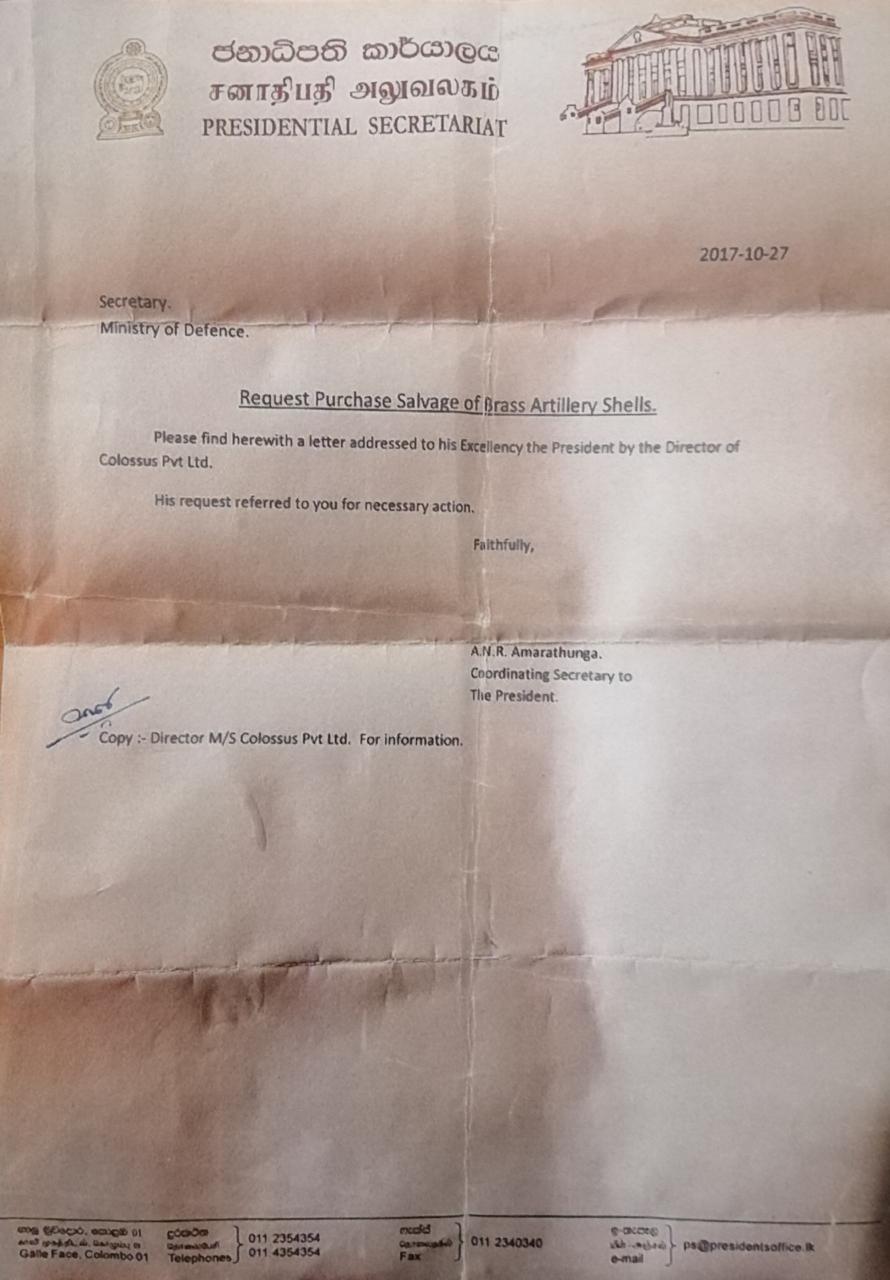 Further to this letter, the Additional Secretary (Defence) of the Ministry of Defence had written on 05.02.2018 to the Manager, Colossus (Pvt) Ltd to obtain used empty copper bullets 1000 kg from IDB (Annex II). 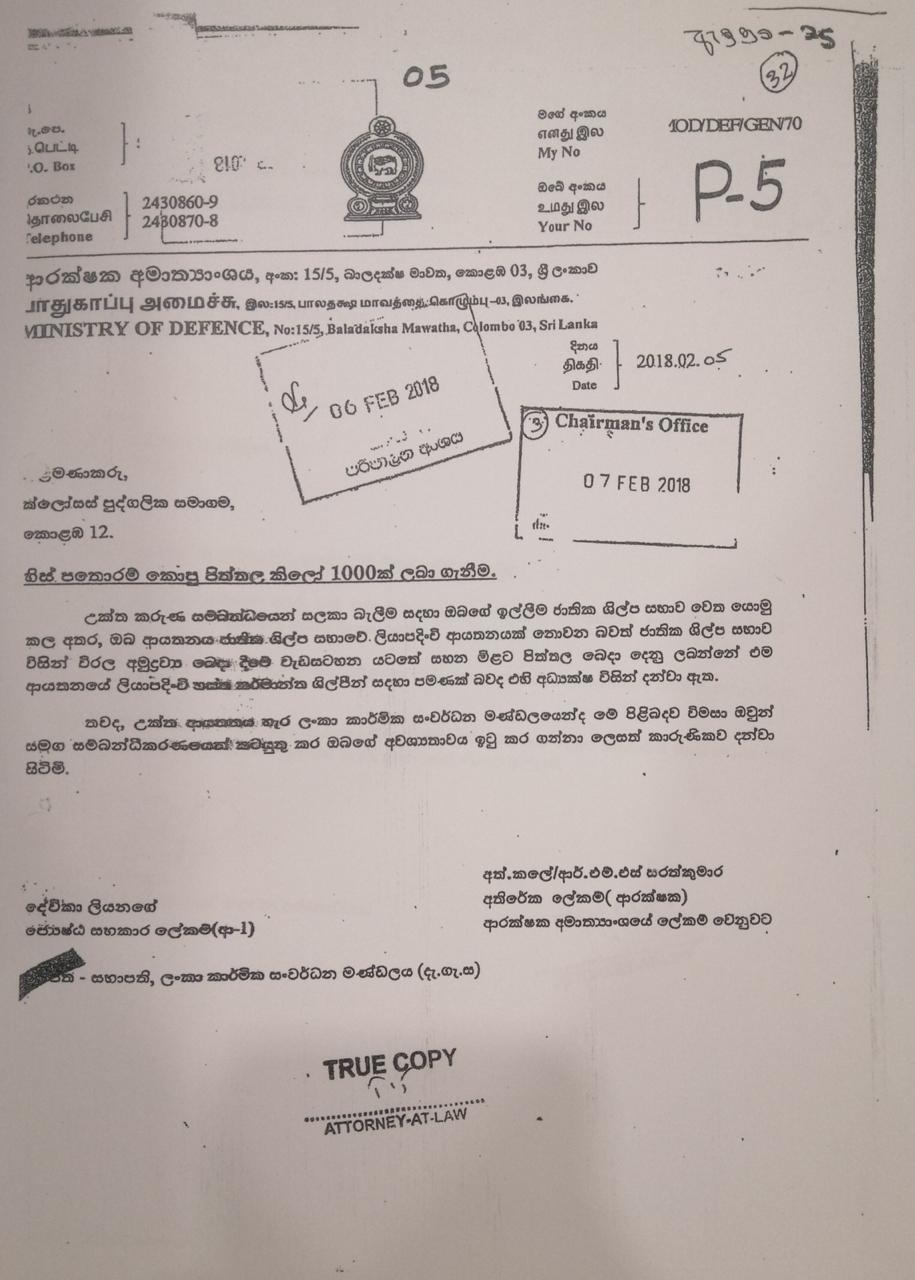 In another circumstance on 06.06.2018, the then Director General, Public Relations of the President Maithripala Sirisena, Mr. Shantha Bandara had written to the Chairman, IDB to allocate 500 MT of scrap copper to Colossus (Pvt) Ltd. who have requested the assistance of the President to facilitate in this regard, as mentioned in the letter (Annex III). 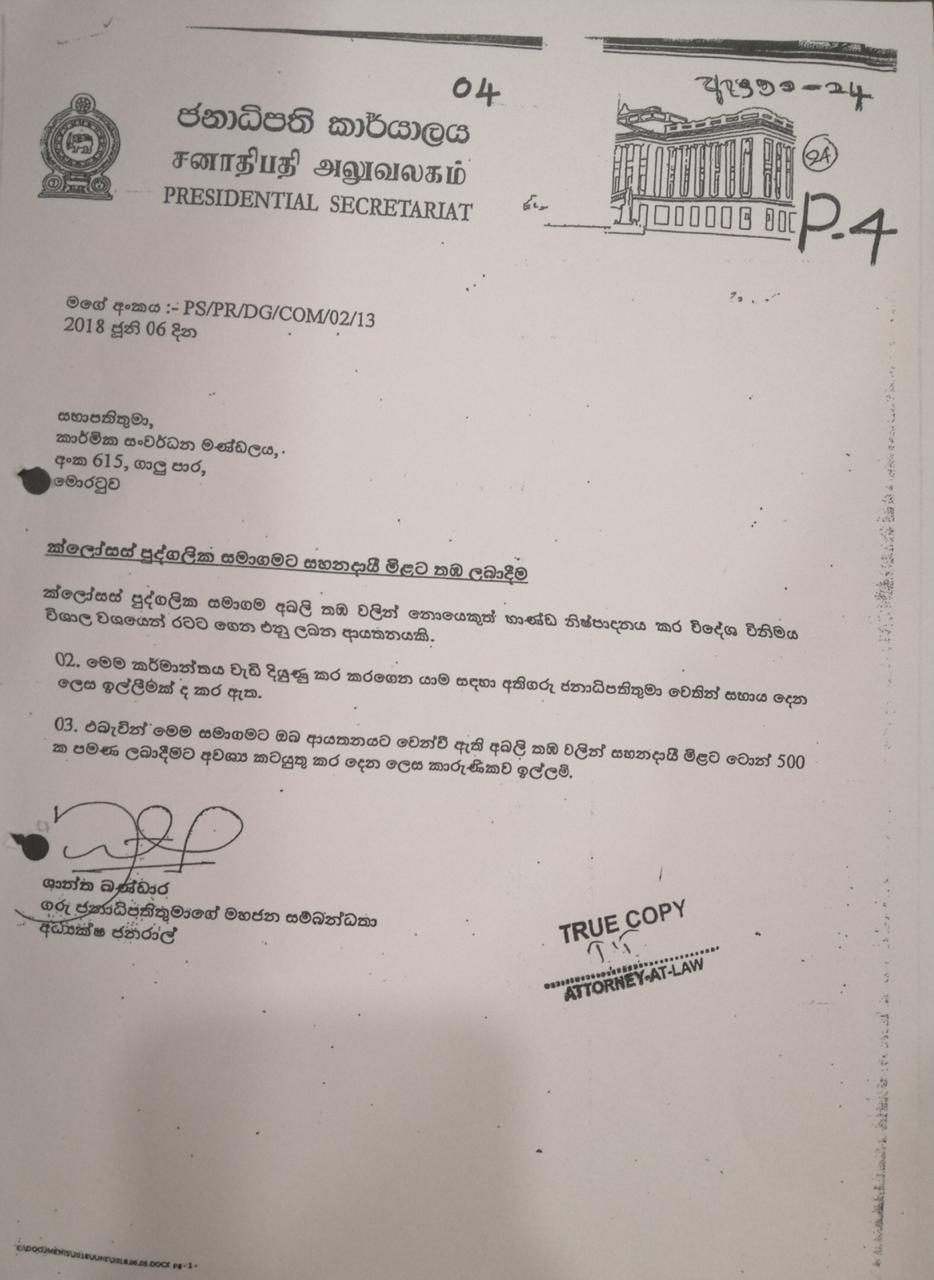 Also, Sri Lanka Telecom had issued a huge quantity of around 1000 Metric Tons of underground cables to Yanky Constructions Company which had in return been delivered to Colossus (Pvt) Ltd. Several correspondence in this regard are attached herewith as Annex IV.

It has been suspicious whether the funds obtained through these projects had been financed for terrorist activities.

Hence, it would be highly appreciated if you could conduct the investigations on an unbiased manner and investigate all institutions concerned thoroughly on whether these institutions which had given much importance to Colossus (Pvt) Ltd. has had any direct or indirect connections with Insaf Ahamed and the utilization of those funds for terrorism etc. and expedite the investigation process.

Your kind consideration and necessary intervention in this matter would be much grateful.

Thanking you,
Yours Sincerely,