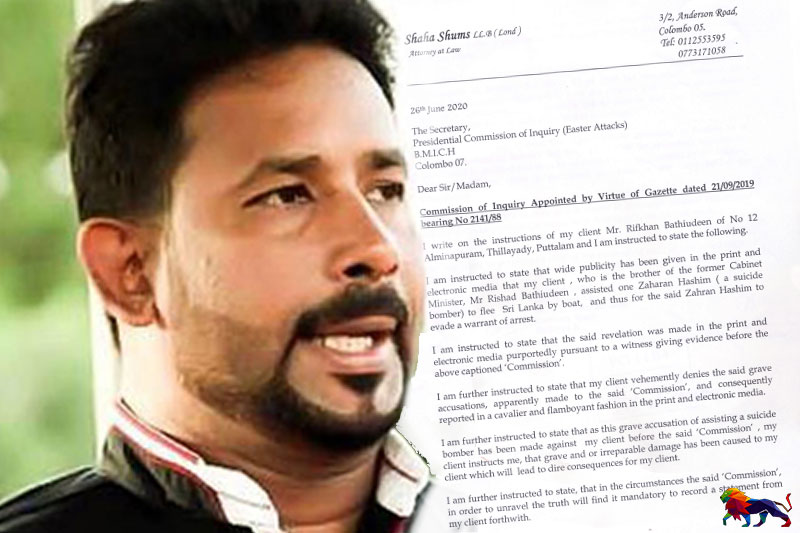 Attorneys representing Rifkhan Bathiudeen have written to the Presidential Commission of Inquiry probing the Easter Sunday attacks to allow his client to record a
statement regarding the allegations levelled against him on mainstream media and news websites.
During a morning breakfast show which aired on Tuesday (23) on a popular TV channel, it was revealed that one of the brothers of former minister Rishad Bathiudeen named Rifkhan Bathiudeen who is presently under the detention of the Criminal Investigation Department (CID) had assisted Zahran Hashim, ring leader of the Easter Sunday attacks, to flee from the island by a boat to India in 2018.
However, Rifkhan Bathiudeen had written to the Commission on the same day categorically denying the allegations made by a former intelligence officer stating that it was his younger brother Riyaj Bathiudeen who was under the detention of the CID. He further asserted that he had never met Zahran Hashim, not even once.
Attorney-at-law Shaha Shums while vehemently denying the grave accusations levelled against his client, also noted in his letter to the Commission that the so called 'revelation' that was made to the Commission which was subsequently reported in a cavalier and flamboyant fashion in print and electronic media has caused grave and irreparable damage to his client.
Under these circumstances, attorney-at-law Shums stated that the Commission should find it mandatory to record a statement from Rifkhan Bathiudeen to find out the truth and allow Rifkhan to respond to these false accusations.
Drawing the Commission's attention to Section 7(1) (a), (b) and (c) of the Commissions of Inquiry Act No. 17 of 1948, Shums stated that the Commission is "under obligation to inter alia procure and receive all evidence under oath."
As such, "my client requests that the Commission permits him to give such statements as necessary," attorney-at-law Shums stated adding that Rifkhan be allowed to make a statement in the coming week since the fabricated allegations have become an issue of national importance.
The letter is found below. 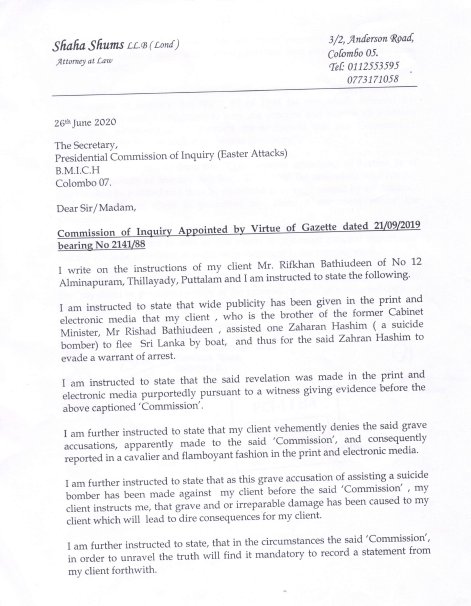