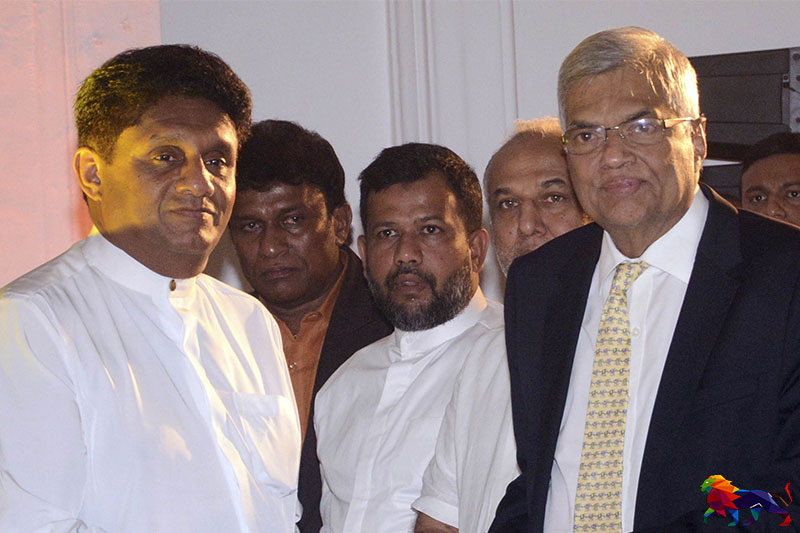 The majority of Sri Lanka’s opposition leaders including the former prime minister have urged the president to reconvene the dissolved parliament in order to extend their support
in the battle against the Covid-19 pandemic that is experiencing a surge in new cases.

The appeal to the president comes at a time the number of affected patients passed the 500 mark. Almost a third of them are navy officers.

“Regrettably, the optimism that prevailed in our country until a few days ago that the spread of the virus could be managed is now receding,” said the statement by the opposition, which offers “without any strings and only in the best interests of the country and our people."
The party leaders asserted that they will draw no salary and will not defeat or thwart the government’s legitimate actions during this critical time.

Full text of the joint statement is found below

"1. Against the backdrop of a public health crisis caused by the COVID-19 pandemic and the steps taken by governments to control it, a range of new challenges have emerged in Sri Lanka as well. Regrettably, the optimism that prevailed in our country until a few days ago that the spread of the virus could be managed is now receding. If further spreading of the pandemic is not decisively halted in the coming few weeks, the country will face the risk of the prevailing public health crisis being compounded by crisis situations in the economic, social, and political spheres too.

2. We are concerned that several hundreds have been infected; several thousands have lost their livelihood. Frontline health workers are putting their best efforts to protect us all risking their own safety. Their efforts should not go in vain because of our political decisions.

3. The political situation is specifically in a state of uncertainty due to the dissolution of Parliament and the absence of conditions conducive to hold parliamentary elections as stipulated. There is also no assurance that the elections could now be held on 20th June. The new date was determined by the Election Commission only a few days ago. The Commission has already indicated that this will have to be reviewed against the evolving public health situation in the country.

4. We can reasonably assume that no suitable environment is likely to prevail in the next two months to conduct a free and fair election. Similarly, we do not think the people of our country should be exposed to the unnecessary danger of a public health hazard by holding an election anytime soon. Sri Lankan people have repeatedly demonstrated their commitment to the democratic process by actively participating in election campaigns and also turning out in large numbers for voting. A free and fair poll also entails a proper campaign, which would invariably heighten the risk of the virus spreading countrywide. We are acutely aware of the exponential rise in infections last week.

5. Our country, like any democracy, is governed by three institutions with distinct and separate powers, viz, the Executive, the Legislature, and the Judiciary. All three of these organs are vital, and must be active for Rule of Law to prevail. Their functioning is more important now than at any other time – when we face an unprecedented challenge. But this crisis is taking place at a time when Parliament has been made inactive. Meanwhile, the President has also refrained from exercising the discretion to summon Parliament under Article 70 (7) of the Constitution. In view of the necessity to repeatedly postpone the Election, there is now a risk that Parliament would remain inactive for much longer.

6. It is our genuine belief that re-summoning the dissolved Parliament and through it securing the cooperation of political parties and MPs represented in the dissolved parliament would greatly contribute to the resolving of a number of urgent governance issues that have emerged amidst the crisis. Getting appropriate and new legislation passed in order to meet the public health crisis and obtaining parliamentary sanction to the utilization of monies from the Consolidated Fund are some such important and urgent functions of Parliament.

7. We are faced with an unprecedented national crisis which shows no signs of an early ending. As members of the dissolved Parliament, we are duty bound to fulfill our obligations to resolve this crisis in a spirit of responsible cooperation extended to the President. We also emphasize that all political parties and political leaders across the political divide have before them the challenge of transcending partisan agendas and working together for the common good of the people and the country amidst an unprecedented crisis.

8. We are prepared to lend our support to the government in Parliament to achieve the above so that the governance of the country can proceed properly and lawfully, in compliance with the Constitution. We assure the people of our country that we will not draw salaries nor attempt to defeat the government nor thwart any of the legitimate actions of the government during this period. Our good faith has already been demonstrated by the fact that we have cooperated fully with the government in maintaining the “curfew”, although the same has not been imposed legally.

9. In these circumstances we urge His Excellency the President to respond positively to this offer of responsible cooperation by us at this critical time, and revoke the proclamation dated 2nd March 2020 dissolving Parliament so that all of us can jointly fight to eradicate this virus, and also ensure that everything is done lawfully and in compliance with the Constitution. The President can thereafter dissolve Parliament whenever the situation becomes conducive to conduct the Election.

10. In the alternative, His Excellency should at least exercise his powers under Article 70(7) of the Constitution and summon the dissolved Parliament; and His Excellency and indeed the whole country can count on our utmost sincerity and responsible cooperation, which is being offered without any strings and only in the best interests of the country and our people." 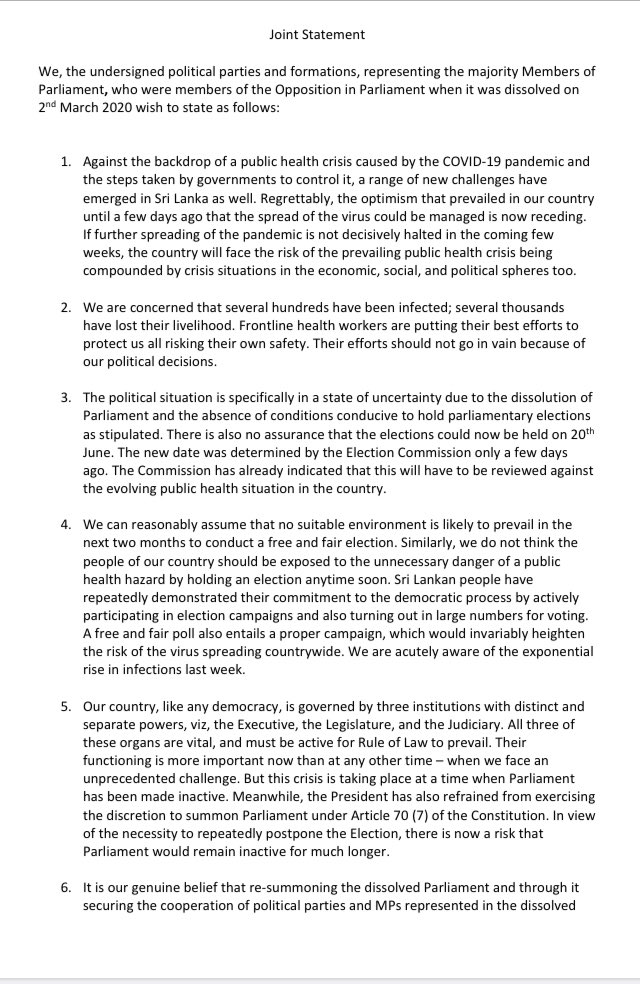 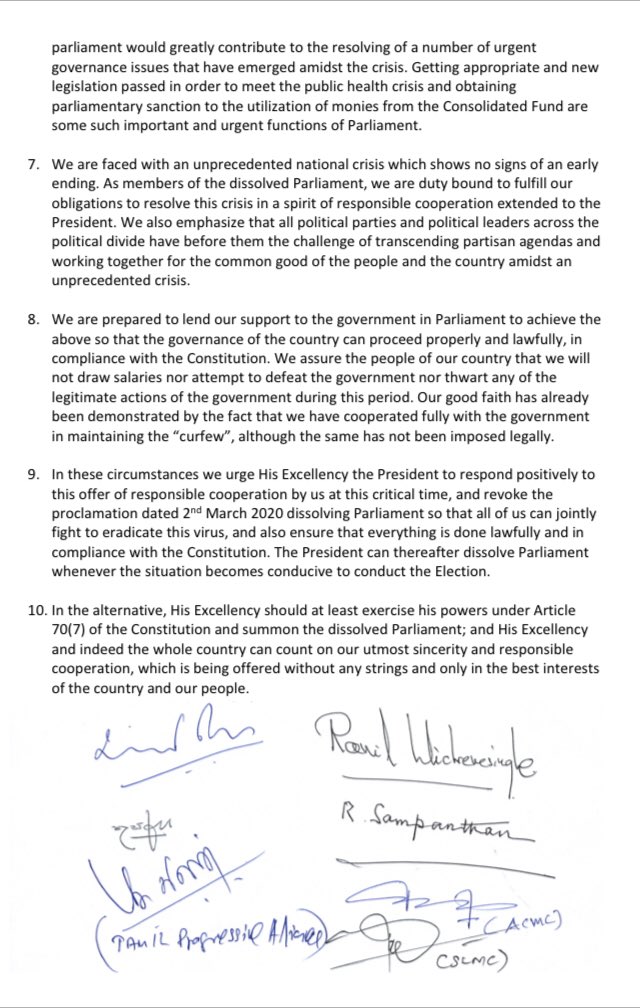