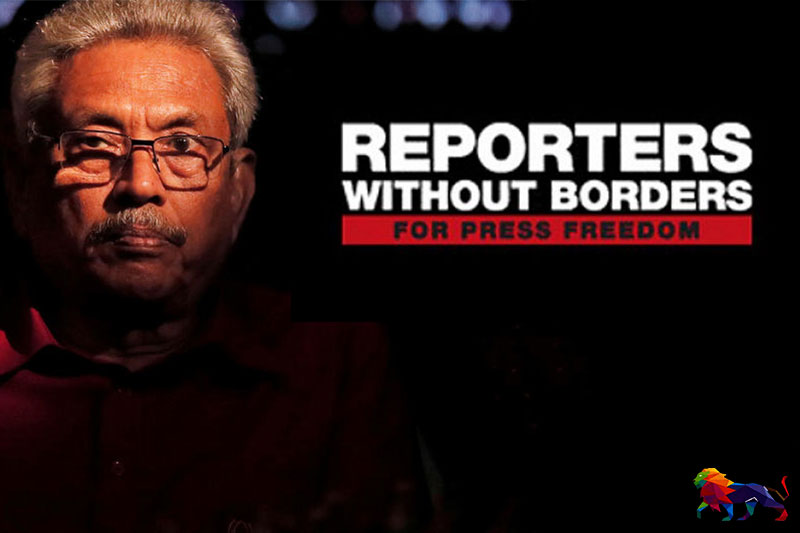 Reporters Without Borders (RSF) in a statement said that they share the concerns of Sri Lanka’s journalists about the searches, interrogations and acts of intimidation to which they have been subjected to since Gotabaya Rajapaksa was sworn in as president just two weeks ago.
"The authorities must put a stop to all forms of intimidation," RSF said.
It took little more than a week after his installation on 18 November for Rajapaksa, also known as the “Terminator,” to start having an impact of press freedom in Sri Lanka.
The initial targets included Newshub.lk, a Colombo-based news website that police raided on 26 November, searching the contents of its servers, desktops and laptops.

The warrant produced by the police had expired on 12 December 2018, nearly a year ago, but the police brushed that aside, blaming a typing error, and continued to use the searchword “Gota” on all of the website’s computers to find and examine references to Gotabaya Rajapaksa.

“This full-blown police raid on an independent news portal, compounded by a crude breach of criminal procedure, sends a very disturbing signal about respect for press freedom under Gotabaya Rajapaksa,” said Daniel Bastard, the head of RSF’s Asia-Pacific desk. “We urge the new government to issue clear directives to the police to let journalists do their work without subjecting them to intimidation.”

Sakthivelpillai Prakash, the editor of the Tamil-language newspaper Thinnapuyal was questioned by plainclothes police in the northern city of Vavuniya on 25 November. After interrogating him about the newspaper’s coverage (in articles and photos) of the former Tamil Tiger rebellion, they asked him to provide the contact details of all of its reporters, which he refused to do.

Sanjay Dhanushka, a journalist who manages the video channel at TheLeader.lk news website, was summoned and questioned by the Criminal Investigation Department for several hours on 26 November.

Then Thushara Vitharana, the editor of the Voicetube.lk website, was summoned for questioning by the CID two days later, on 28 November. She told RSF she was interrogated for two hours about her former activities at TheLeader.lk, for which she no longer works.

When she asked why she was being questioned, the police said it was in connection with a complaint by the Sinhalese National Organization, a group that promotes Sinhalese and Buddhist supremacy – a theme that was also at the heart of Rajapaksa’s successful election campaign.

As RSF noted shortly before the election,  Rajapaksa was nicknamed the “white van commando boss” while secretary of defence during the “dark decade” from 2005 to 2015 because of the white vans that were reportedly used to abduct and murder journalists.