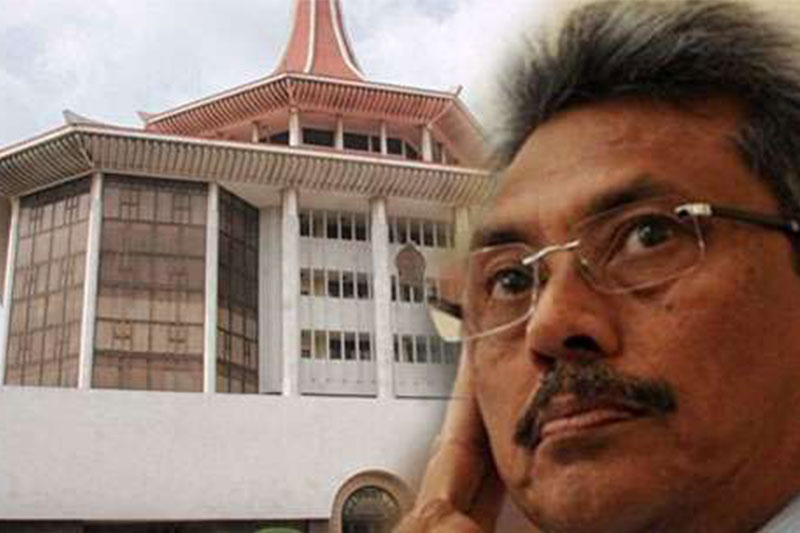 An appeal was yesterday (13) filed with the Supreme Court (SC) seeking to overturn the decision last month by the Court of Appeal to dismiss a writ application that questioned the dual citizenship certificate of Sri Lanka Podujana Peramuna (SLPP) presidential candidate Gotabaya Rajapaksa.

Civil activists Prof. Chandragupta Thenuwara and Gamini Viyangoda filed a writ application in the Court of Appeal challenging the authenticity of the dual citizenship certificate granted to the former Defence Secretary on 21 November 2005 by his brother, then President Mahinda Rajapaksa.

On Friday, 4 October, after several days of hearings, a three-judge bench comprising Court of Appeal President Yasantha Kodagoda and Justices Mahinda Samayawardhena as well as Arjuna Obeysekere dismissed the application.

A detailed written order was issued by the court a week later, in which the bench had stated that President Rajapaksa was the “repository” of executive power under the Constitution and was able to lawfully exercise the powers vested in a minister by law, even before the appointment of a Cabinet of Ministers.

The judges had also ruled that the two activists had no standing to file the application and should have filed it several years ago and had made the application for a collateral political purpose.

However, in the appeal filed yesterday before the Supreme Court, the petitioners have asked the apex court to consider whether the Court of Appeal erred in law by stating that the Constitution allowed a newly elected President to have exercised powers conferred on a minister by any written law before a Cabinet of Ministers is appointed.

The appeal has further requested the court to revise the Court of Appeal finding that the President alone was “the repository of the executive power of the people,” and to reconsider the way in which the Court of Appeal interpreted the Constitution in reaching their verdict.

The petitioners have also asked the Supreme Court to reconsider the Court of Appeal findings that they were guilty of unexplained delay, that they had filed the application for a collateral purpose and not as genuine public interest litigation, and that they had not disclosed a sufficient interest to have and maintain the application.

The appeal has also sought to have the dual citizenship certificate of Gotabaya Rajapaksa declared a nullity, and to nullify Rajapaksa’s ability to act as or represent himself as a citizen of Sri Lanka.