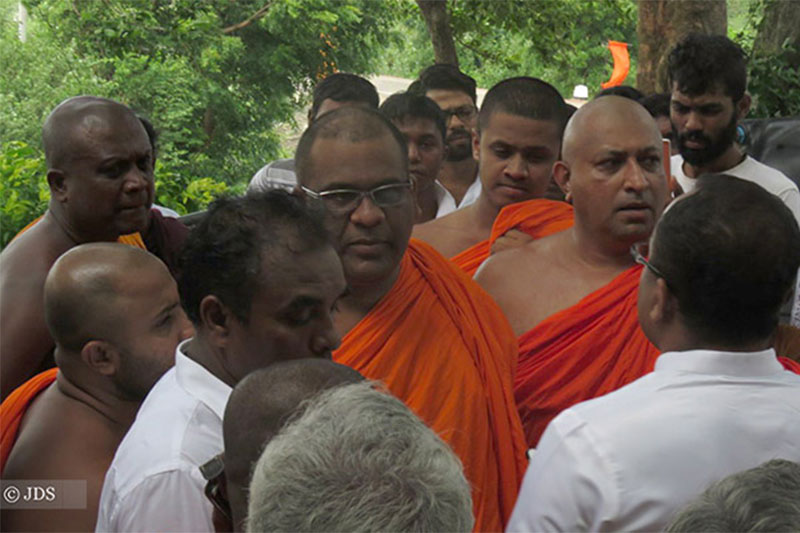 A Buddhist mob defied court by cremating the body of a Buddhist monk in an open field next to a Hindu place of worship in the north of Sri Lanka with the help of police.
Bodu Bala Sena chief Galagodaaththe Gnanasara and fellow monks leading the mob - September 23, 2019.

Angered by the violation lawyers in the region have declared a boycott of court proceedings.

Sinhalese bussed from the south of the island were led by extremist Buddhist monk Galagodaaththe Gnanasara to carry out the cremation.

Gnanasara, who is the head of Bodu Bala Sena (Buddhist Brigade) had been earlier convicted for contempt of court and set free prematurely by a presidential pardon.

"We will cremate the body"

Local Tamils who protested the cremation on land regarded as holy by Hindus, were blocked by police including senior officers, paving the way for the Buddhists to carry out their provocative act unhindered.

On 23 September, the Mullaitivu district court prohibited cremating the body of deceased monk Colombo Medhalankarakiththi on a land claimed by the Neeraviyadi Pillayar Hindu kovil.

The Buddhist monk who passed away was the chief incumbent of the Gurukanda temple recently constructed next to the Hindu place of worship amidst several protests by Tamils in the area.

Considering representations made by both parties District Judge S Lenin Kumar ordered the cremation to be held in a coastal land away from both religious premises. 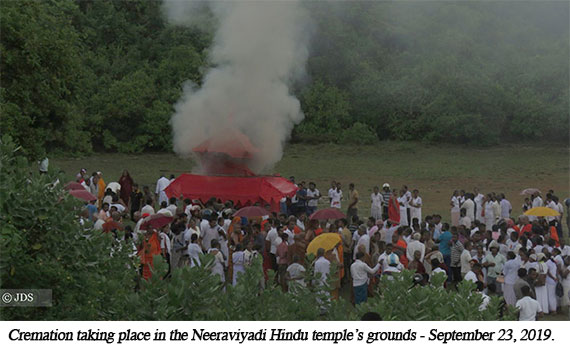 “Whatever the court ruling, we will cremate the body,” BBS leader Gnanasara told journalists at the court premises and went on to carry out his threat, unhindered.

Local journalists told JDS that lawyers representing Hindus who questioned police officers for failing to implement the court order were harassed by the mob.

“By not carrying out the court order that prohibits the cremation at the kovil premises, police have acted illegally as well as in favour of the Sinhala Buddhist majority,” head of the Mullaitivu Bar Association N Paramasothy told journalists.

Bar associations in North have called for a public protest including a boycott of court proceedings.
(jdslanka.org)