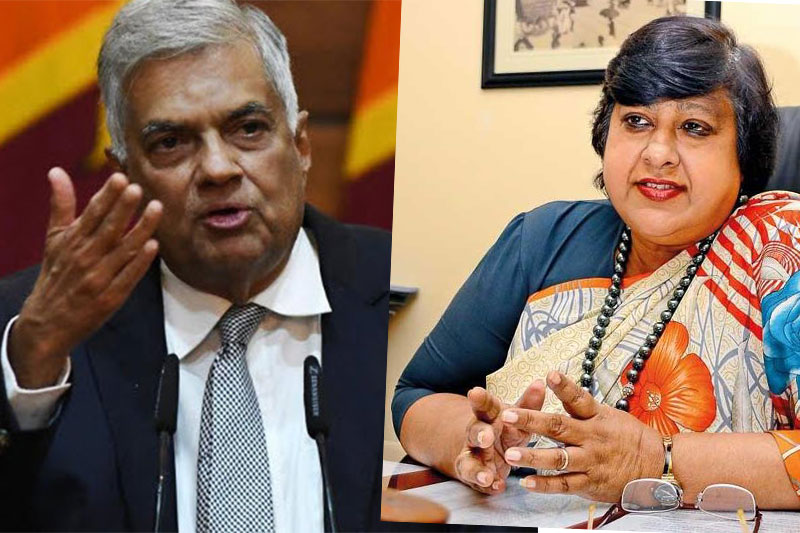 Prime Minister Ranil Wickremesinghe has denied allegations levelled by President Maithripala Sirisena that he had recommended former Director General of Commission to Investigate Allegations of Bribery or Corruption (CIABOC) Dilrukshi Dias Wickramasinghe to be appointed as a Supreme Court (SC) judge.

Incumbent Solicitor General (SG) Dilrukshi Dias Wickramasinghe is currently in the spot light over a controversial leaked telephone conversation purportedly between her and Chairman of Avant-Garde Nissanka Senadhipathi.

Addressing a function on Saturday (21), President Sirisena said the Prime Minister proposed a few months back that Wickramasinghe be named to a position of a Supreme Court justice.

Sirisena however said that he was not in favour of this idea.

The Prime Minister issuing a press statement in response to the President’s comment said he had never sent letters to the President recommending Dilrukshi Dias Wickramasinghe or anyone else’s name to a position of a Supreme Court judge and hence has been wrongfully accused.

“According to the constitution, recommendations to the President, on Supreme Court Justices, can be only sent by the Chief Justice and Attorney General. I have never acted beyond the Constitution,” he said.

He further noted that Dilrukshi Dias Wickramasinghe’s statement on the leaked conversation must be investigated.

“Currently the Attorney General has requested the Public Service Commission (PSC) to conduct an inquiry. The investigation must be expedited. Then we would be able to find out which politician she is referring to in the leaked telephone conversation.  We could also find out if she has done something illegal,” the Prime Minister said.

The Prime Minister went on to say that Dilrukshi Dias Wickramasinghe had never served at the Temple Trees.

“The Bribery Commission was not formed at the Temple Trees but outside of it. Ananda Wijepala served as the Director of (CIABOC) representative while Deputy Solicitor General Thusitha mudalige attended meetings of the CIABOC,” he said

“I wonder why the President is accusing me in the background of a presidential election.”

“If there are any doubts about me or any of the Ministers, its best to bring these issues up at a cabinet meeting. Or ask one personally. To make a statement like this in public is not a democratic process. It is not a responsible act,” the Premier said.

“If accusations are levelled at me in the future I will not respond to each and every one of them. If there are any accusations please raise them up in the right place. It is a part of the constitutional and democratic process,” the Prime Minster added.