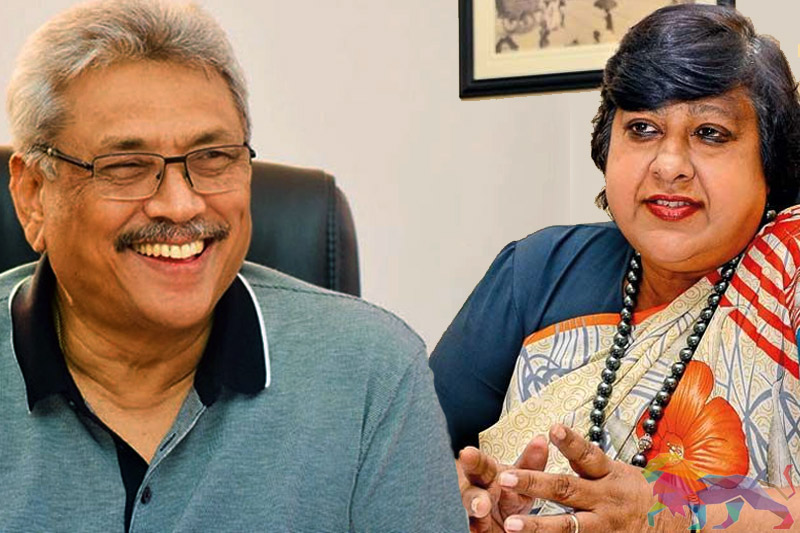 A leaked telephone conversation between Avant Garde Chairman Nissanka Senadhipathi and the former Director General of the Commission to Investigate
Allegations of Bribery or Corruption (CIABOC) and incumbent Solicitor General, Dilrukshi Dias Wickremasinghe has made startling revelations including the fact that she would not file a court case against Sri Lanka Podujana Peramuna (SLPP) presidential hopeful, Gotabaya Rajapaksa because she knew how to “make the law and break the law.”

Wickremasinghe during the telephone conversation expresses her deep regret over the filing of the controversial Avant Garde case against Senadhipathi and several other including Rajapaksa.

In the phone conversation, Senadhipathi speaking to Wickremesinghe says, “Over 4000 employees have lost their jobs and homes as a result of the closure of Avant Garde Maritime Services.”

In response to Senadhipathi’s statement, Wickremasinghe says, “I never expected the business (Avant Garde Maritime Services) to close down, because this is one of the best businesses in the country. If I had the slightest knowledge that the business would collapse, I would never have filed the case. I have personally read more than 7,500 letters from your office; hence I know how you have looked after the families of your employees who were in trouble. I am truly very sad about what has happened. I wouldn’t file a complaint against Gotabaya Rajapaksa. I know how to break the law and make the law.”

She further blames the disruptive politics in the country for the reason behind the Avant Garde case.

However, several attempts to contact Wickremasinghe to confirm the telephone conversation proved futile as she was unavailable in her office.

Senadhipathi said the former Bribery Commission head had made the call “out of guilty conscience.”

Senadhipathi added that the call was made by Wickremasinghe about three months ago.

Incumbent Director General of CIABOC, Sarath Jayamanne has so far refused to make any comment on the comments made by one of his predecessors.

Meanwhile, Minister of Justice and Prison Reforms, Thalatha Atukorale said the leaked telephone conversation between Senadhipathi and Wickremasinghe needed to be authenticated.

Atukorale told the media, “I checked the recording a short while ago. We will launch an investigation on this recording. I cannot comment until the recording is authenticated.”

The Minister noted that if the leaked telephone conversation has been proved valid, she will write to the Attorney General Dappula de Livera for an explanation.

She declined to comment on further actions to be taken until the recording was proven valid.

Attorney General de Livera is expected to make a request to the Public Service Commission (PSC) next week to take disciplinary action against Solicitor General Wickremasinghe over the alleged telephone conversation with Senadhipathi after confirming its authenticity.

“In the event she fails to resign, the Attorney General is expected to make a complaint to the Public Service Commission,” sources have been quoted as saying to the media.

Wickremesinghe served as the Director General of CIABOC from 2015 to 2016 and returned to the Attorney General’s Department soon after.