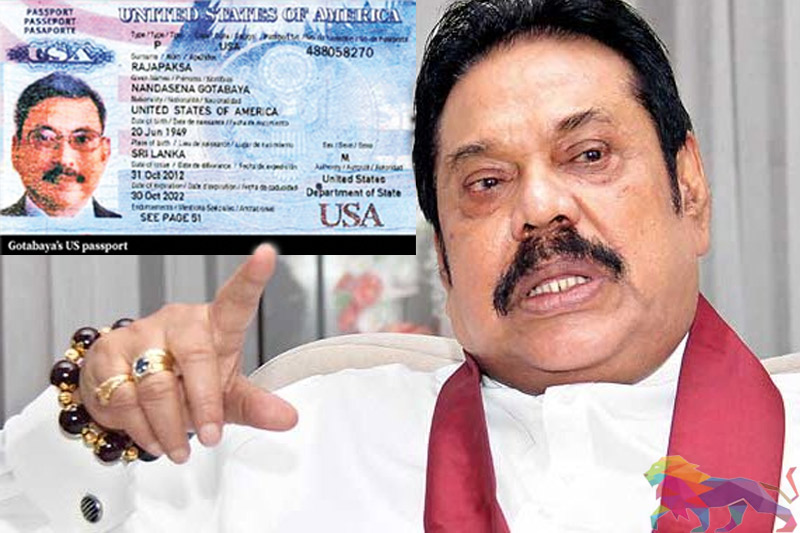 out by the Criminal Investigations Department (CID) on the allegations surrounding the new Sri Lankan passport obtained by SLPP presidential hopeful, Gotabaya Rajapaksa.

He claims that the CID was focusing its attention on Gotabaya Rajapaksa more than the Easter attacks.

Rajapaksa said at an event yesterday (4) that the CID is investigating false allegations over Gotabaya’s passport.

He noted that the CID is not focused on the investigations over the deadly attacks on Easter Sunday.

Rajapaksa charged that the government is determined on taking revenge on members of the former government.

Gotabaya Rajapaksa was also present at the event.

It is learnt that a team of CID officers had also visited Hambantota as part of the probe to inquire into the inclusion of Gotabaya’s name in the 2005 voter registry of the Mulkirigala electorate when he had become a US citizen in 2003.

The Acting Inspector General of Police (IGP) received several complaints by civil society on the alleged “criminal activity” that had taken place when obtaining a new Sri Lankan passport by Gotabaya.

The Acting IGP first directed the CID to handle the probe but later assigned it to the Colombo Crimes Division (CCD). However, following findings of the CCD, the probe was redirected to the CID.

The probe has found that files relating to Gotabaya’s dual citizenship do not exist at the Immigration Department and that computer records were made only in January 2014. Gotabaya was also registered to vote in 2005 despite being ineligible as an American citizen, and in May this year obtained a passport on a new National Identity Card (NIC) that is not tied in immigration records to his previous passports and court-ordered travel restrictions.

Official records indicate that Gotabaya returned to Sri Lanka as a US citizen on an American passport on July 3, 2005 using a tourist visa. In an affidavit he filed with the Supreme Court in May 2015 to support an application to prevent his arrest in several criminal cases including the MiG Deal, Avant Garde floating armoury scam and financial crimes at Mihin Lanka, Rajapaksa declared under penalty of perjury that he returned to Sri Lanka to “assist” his brother “in the election campaign” for the presidency.

The conditions of Rajapaksa’s on-arrival visit visa permit only “bona fide tourist” activity and forbid “visit for purposes other than holiday.”

The day Mahinda Rajapaksa took oaths as President on November 18, 2005, Gotabaya apparently lodged a dual citizenship application that was fast-tracked, and approved on November 21.

However, according to the few records that exist of this event in Immigration Department systems, Gotabaya’s purported dual citizenship only became effective on 30 November 2005.

He was appointed Defence Secretary on November 24, 2005.

Gota's passport probe back to the CID