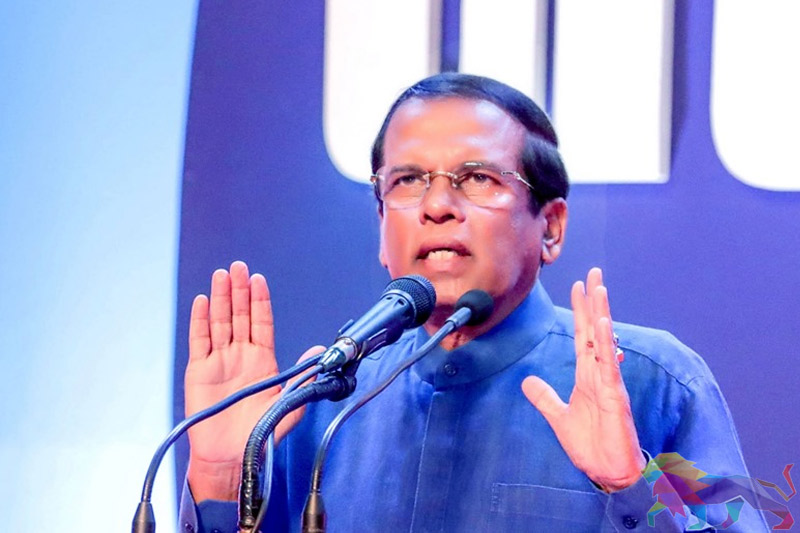 The President made this observation at the 68th anniversary convention of the SLFP held at the Sugathadasa Indoor Stadium yesterday (4).

Sirisena rallied his party members with pledges to establish a SLFP led Government in 2020, noting that under the 19th Amendment to the Constitution, more powers have been devolved to the Prime Minister. The President refrained from making any comment on contesting for a second presidential term.

Sirisena said that in the forthcoming Presidential Election, a broad progressive front would be created to counter the United National Party (UNP), and said in 2020 the SLFP will be a vital faction in forming a new Government.

He called upon all SLFPers to strengthen the party structure, enabling to form a SLFP Government in 2020.

He said that a new path for development should be selected, and that the people should try and understand which political structure possesses the best vision.

The SLFP should form a political movement free of corruption, malpractices, and unethical political practices.

"The entire political system has become corrupt, dishonest, and immoral. Our responsibility is to build a political force which is pure, without corruption, people-oriented, and ethical, to oust the current governance by the corrupt, elitist, and anti-populist groups."

According to the President, patriotism is the last refuge of the political scoundrel, as evident from the actions of some politicians. He urged the people to properly study what politicians say to pick the best political leader for the country.

He noted that the SLFP should be strengthened to defeat the UNP, and the party should take the lead to create a new political culture in the country.

“We will mobilise people’s movements. We will create the 2020 Government, adhering to SLFP policies. Be prepared to show our strength. Let us build the party and mobilise a new force within the next few months,” he said.

He pointed out that the Prime Minister had failed to present the review committee report to hold the election, after the delimitation report was defeated in Parliament.

“I fought within the Government to prevent corruption, robberies, and malpractices, and to safeguard the interests of the people. Bank robbers and the corrupt people should leave politics. All the documents are ready for the extradition of former Central Bank Governor Arjuna Mahendran. Documents are also ready to punish the leaders responsible for the Central Bank scam,” Sirisena said.

The President observed that he believes corrupt elite groups have come together, which has been one of the biggest challenges he had to address during the past four and a half years.

"People do not know who those elite groups are. They should be exposed. They were all against me, therefore I had to fight against them," he added.

“Whatever allegations were levelled against us for the past five years of my tenure, I was committed to building a corruption-free country, as well as attempting to ensure democracy. The neo-liberalism concept is not suitable for our country. During my tenure, I was able to ensure maximum freedom and democracy in the country. As I said earlier, not a single civilian was targeted by the guns of the State during this time. I am proud to state that no media institution was burnt down, no journalists were threatened,” the President noted.

He said the country should achieve balanced development, and the development process must be sustainable and efficient.

He also said the country must move towards a green economy, and emulate the success of emerging economies based on smart technology.

“I firmly believe our success lies in investing more on smart technology and robotic engineering. We should move towards a technology-based economy to achieve our economic goals. The development projects should preserve the environment for future generations," President Sirisena said.

According to the President, the Government and Opposition leaders are holding discussions with Tamil leaders purely to get their votes. “But nobody has a genuine plan for reconciliation. They are only thinking about the number of votes in the North of the country. It’s a tragedy,” he said.