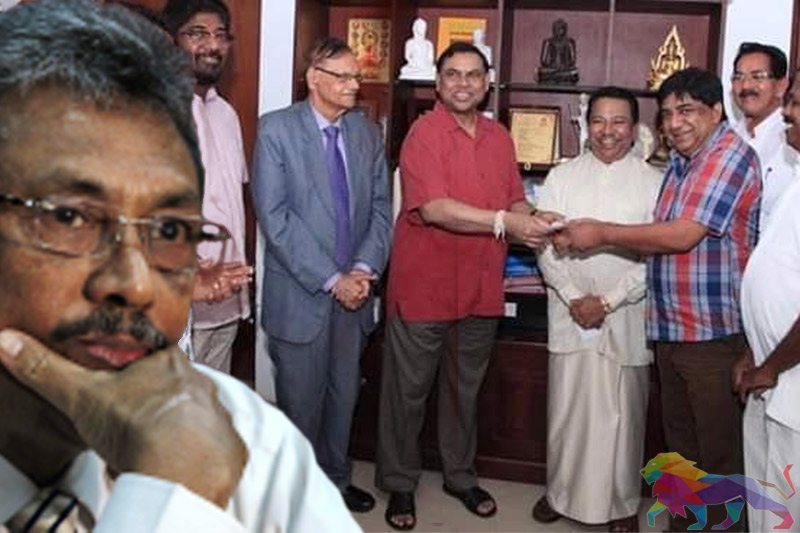 Founder and National Organiser of Sri Lanka Podujana Peramuna (SLPP), Basil Rajapaksa is engaged in a sinister plan to obstruct the successful discussions that have been initiated between the Sri Lanka Freedom Party (SLFP) and SLPP’s presidential candidate, Gotabaya Rajapaksa, a senior SLFP MP told The Leader.

The parliamentarian made this observation in response to Basil’s move to give membership and officially take over two United People’s Freedom Alliance (UPFA) National List MPs, S.B. Dissanayake and Dilan Perera, who are facing disciplinary inquiries before the SLFP.

Therefore, several SLFP seniors have informed Gotabaya to ensure that the existing family issues are resolved before the next round of talks with the SLFP.

SLFP General Secretary, MP Dayasiri Jayasekara, party Treasurer, MP Lasantha Alagiyawanna and UPFA General Secretary, MP Mahinda Amaraweera met with Gotabaya on Wednesday (28) at his residence and commenced the first official discussion between the SLFP and SLPP’s presidential hopeful. After a lengthy discussion, both parties have reached an agreement on key areas.

However, just when the discussion between the SLFP and Gotabaya have entered a positive stage, Basil has taken steps to give membership to the two SLFP MPs who were facing disciplinary action for violating the party’s code of conduct.

“Basil is taking SLFPers to the SLPP while holding official discussions with us to form a political alliance. It means he is not sincere in his discussions with us. He is trying to destroy us. We all know that Basil is good at political games. But we never thought that Basil will try to play a political game and block his own bother when he builds a successful dialogue with the SLFP,” an SLFP MP told The Leader.

Meanwhile, the Anidda Sinhala newspaper has stated that despite media reports claiming both talks between the SLFP and SLPP were successful, the two parties have not reached an agreement on forming an alliance.

A discussion between the SLFP and SLPP was held at the Opposition Leader’s Office on Tuesday (27).

The SLPP team was led by Basil Rajapaksa and included party Chairman Prof. G.L. Peiris. The SLFP was represented by Jayasekara, Alagiyawanna and Amaraweera.

A discussion between President Maithripala Sirisena and Opposition Leader Mahinda Rajapaksa was held on the same night.

There had been no solid agreement on the formation of a political alliance and both parties have been unable to reach an agreement on many key issues.

However, it is learnt that there seems to be a change in the stance of the SLPP with regard to the SLFP. The SLPP earlier behaved in a manner where it ignored the SLFP and its leaders, which seem to have changed when the two parties met on Tuesday.

It is also learnt that the SLFP feels that discussions have not reached a successful position where an agreement could be reached on forming an alliance.