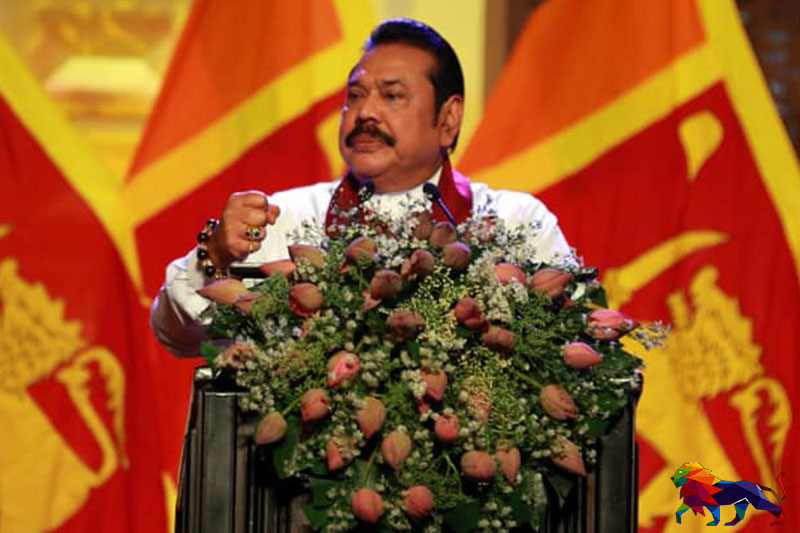 A statement made by the newly appointed Leader of the Sri Lanka Podujana Peramuna (SLPP),

Mahinda Rajapaksa at the party convention held at the Sugathadasa Indoor Stadium on Sunday (11) has left many thinking twice about the naming of former Defence Secretary Gotabhaya Rajapaksa as the SLPP’s presidential candidate.

While naming Gotabhaya as the SLPP presidential candidate, Rajapaksa said in several instances, “Gotabhaya was named by you, not me.” A former public representative affiliated to a ‘joint opposition’ political party said that Rajapaksa made this comment since he was well aware that Gotabhaya has not completely fulfilled the requirements to contest the presidential election.

This observation was made when The Leader inquired, “What has become of the assurance given to your party leader by the Opposition Leader?”

The spokesperson further said that Rajapaksa would have made such a statement in order to distance himself from the criticism that could be leveled against Gotabhaya over issues pertaining to his dual citizenship and questions over his Sri Lankan citizenship.

Rajapaksa in his address at the SLPP convention said that the people had chosen Gotabhaya even before he was named as the presidential candidate and that he has now been handed over to the people.

The speech delivered by Rajapaksa was written by MP Dullas Alahapperuma.

The political spokesperson further told The Leader, “Mahinda Rajapaksa is an alpha male. Has he made such public statements earlier? Has he given credit that is due to him to anyone else? Mahinda knows very well the legal impediments before Gotabhaya Rajapaksa. He had referred to them with our party leader on several occasions. That is why he has even recently told our party leader to prepare to face the next presidential election.”

“The reason for naming Gotabhaya Rajapaksa at this juncture although there are several months for the presidential election, was in order to receive some form of relief from the legal issues. To intimidate the courts to an extent, otherwise, he is likely to be jailed over the Medamulana case," the spokesperson said.

Gotabhaya Rajapaksa is still a dual citizen. Therefore, if he is unable to renounce his US citizenship by the time presidential elections are called, our party leader will have the chance to contest the election,” the spokesperson added.

Meanwhile, National Organizer of the Sri Lanka Freedom Party (SLFP), MP Duminda Dissanayake says that although Gotabhaya Rajapaksa is announced as the presidential candidate of the SLPP, it could change in the event an alliance is formed with the SLFP.

The MP has further stated that naming Gotabhaya Rajapaksa as the presidential candidate will not deter the ongoing discussions between the SLFP and SLPP to form an alliance.