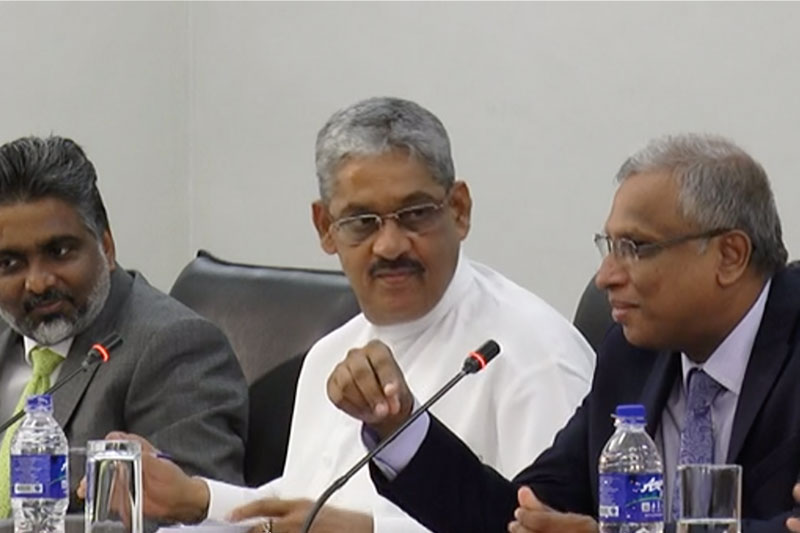 Field Marshal MP Sarath Fonseka and Tamil National Alliance (TNA) MP M.A. Sumanthiran have exchanged words during today’s proceedings of the Parliamentary Select
Committee (PSC) probing the Easter Sunday attacks. The exchange of words was based on the difference of opinions on the issue of the threat level faced by the country in the aftermath of the April attacks.
It was Army Commander, Lt. General Mahesh Senanayake, who testified before the PSC today and Fonseka has said, “When you testified before this committee last time, you said the threat was not completely over. This is true and we have to accept it. Since the day you made that statement there have been several arrests. So it is not over. Some politicians have interpreted in their own ways and claim that the problem is over. It is not so.”
However, Sumanthiran has then said that the statement was Fonseka’s personal opinion and not that of the entire Committee, which had then ensued in an exchange of words between the two Committee members.
“This is the opinion of the Field Marshal. Not the opinion of this Committee,” Sumanthiran has said.“It is my opinion and what is your opinion? Do you think the problem is over?” Fonseka has questioned Sumanthiran.“You cannot question me.  I am a member of the committee,” the TNA MP has claimed. Fonseka has once again asked, “What is your opinion? When would our intelligence services warn us and save us from attacks similar to this?
Finally, MP Dr. Jayampathy Wickremaratne has intervened to quell the situation by saying that each member of the Committee is entitled to his/her personal opinion.
Lt. General Senanayake has then said, “We cannot assure that it is over. There have been some progress in investigations and intelligence gathering methods have been revamped. We are not in a position to say that we could see this problem over within six months or six years.”