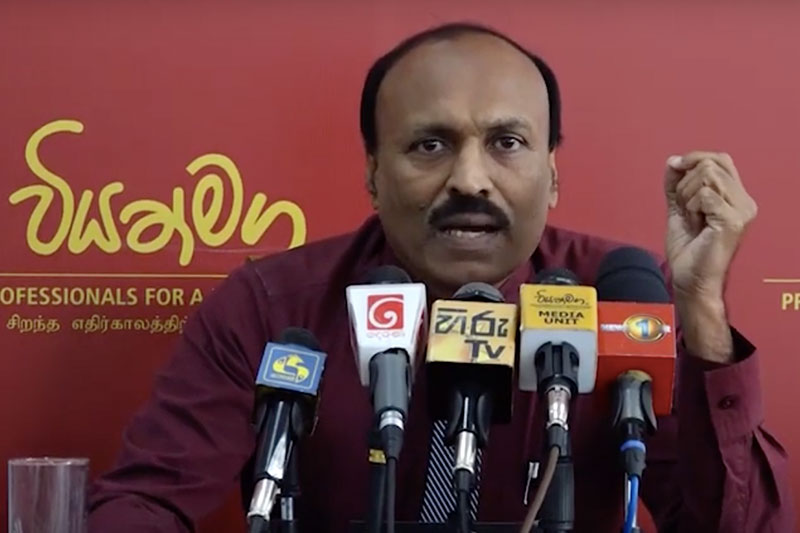 A stalwart in Gotabhaya Rajapaksa’s Viyathmaga organization has said there will be no issue in the State Intelligence Service (SIS) Chief appearing before the Parliamentary Select Committee (PSC) appointed to probe the Easter Sunday attacks if his privacy is ensured.

Holding a press briefing at the Viyathmaga Head Office yesterday (23), a retired General of the Army Boniface Perera made this statement. A former military chief of Vanni, General Perera also added that if the Joint Opposition members also joined the PSC, it would be more productive and effective.

On an earlier occasion, President Sirisena had declared that he would not allow officers in active service to be questioned before the PSC. However, when questioned by the media about officers appearing before the PSC, Boniface Perera had this to say.

Q: During the wartime didn't the whole country know the identity of the Intel Cheif?

A: I don't think the majority of the citizens knew this.

Q: But the Intelligence Cheif has attended international seminars and photographs from these have been published in newspapers.

A: If so then it should not have happened.

Q: Are you against Intel Chiefs being brought before the PSC without allowing the media to cover the session?

A: There is no issue in that. However, there is an issue of the members which consist of the PSC. They appear to be biased and this information can be leaked by them.

Q: But it appears biased because the JO decided to boycott the PSC. Then isn't the JO responsible for this? Why won't you talk about that?

A: That was a political decision but we accept the point your making.

Meanwhile, SIS chief Nilantha Jayawardene is known to have provided evidence in open court when the TNA MP Nadaraja Raviraj murder case was taken up before the Colombo Magistrate, Manilal Waidyathilake several years ago.

For the first time in judicial history, that case was taken up before a seven bench special jury comprising of graduates and senior government officials.

However, while the PSC sittings have commenced, it is reported that media may not be allowed to telecast and attend while Nilantha Jayawardene is providing his statement.