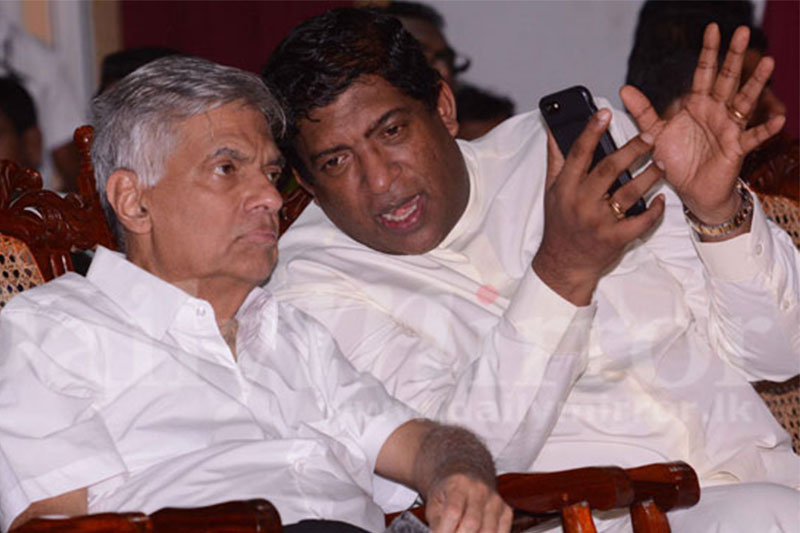 The parliamentary group meeting of the United National Party (UNP) has heated up last evening over the issue of the party’s next presidential candidate, The Leader learns.

UNP Chairman, Minister Kabir Hashim has taken the floor and called for the need to decide on the party’s candidate at the next presidential poll and proposed Deputy Leader, Minister Sajith Premadasa’s name for the candidacy.

Hashim has noted that it was the likes of Premadasa who could steer the party towards victory at the polls and that he should therefore be given the lead to carry out his work.

Hashim explaining the reason for proposing Premadasa’s name for the candidacy and to lead the party at the polls, has said it was “nothing personal” against party leader, Prime Minister Ranil Wickremesinghe.

He has told the party leadership, “This is nothing personal against you Sir. I have always stood by you. But at this juncture, we have to look at the winning strategy for the party.”

Hashim has proposed that Premadasa be given the lead to steer the party’s campaign and secure its victory at the polls.

Wickremesinghe has then said that while the matter needed to be looked into, there were other more compelling issues that needed to be addressed like delivering on the pledges made to the people in 2015.

The UNP Leader has also said that the candidate chosen by the party would also have to be accepted by the parties that would be represented in the proposed broad national alliance.

However, it was the agreement among a majority at the group meeting that the UNP needed to select a winning candidate even though there may be “personal disagreements.”

“The decision on the candidate will be up to the UNP,” the MPs have said.

They have pointed out the need to select “the popular candidate,” as the priority was to “win the election first” and “deliver on people’s demands.”

However, the only person to speak against Premadasa was UNP Assistant Leader, Minister Ravi Karunanayake.

He has said that such a decision as proposed by Hashim should be a unanimous one and their needs to be a collective stance before promoting one individual.

He has further noted that the party needed to explore all options before settling on one individual.

Karunanayake has on many occasions made remarks against Premadasa and has at one point even said he would support the Rajapaksa camp if Premadasa was chosen as the UNP’s candidate.

In similar vein, Karunanayake has objected to Premadasa, which was met with criticism by the rest of the MPs.

Some of the MPs have responded by making critical remarks about Karunanayake’s conduct.

Interestingly, the UNP backbench MPs, whose support Karunanayake was counting on to back his opposition to Premadasa, have remained silent.

In fact, when Karunanayake has said that the backbench MPs would agree to his sentiments and concerns raised by him, the backbenchers have walked out of the meeting.

The rest of the MPs have also followed suite ending the parliamentary group meeting abruptly.

Finally, Prime Minister Wickremesinghe has said that the matter would be discussed in two weeks time at the party’s Working Committee meeting and the final decision would be made afterwards.UNP parliamemtary group heats up over presidential candidate, Ravi